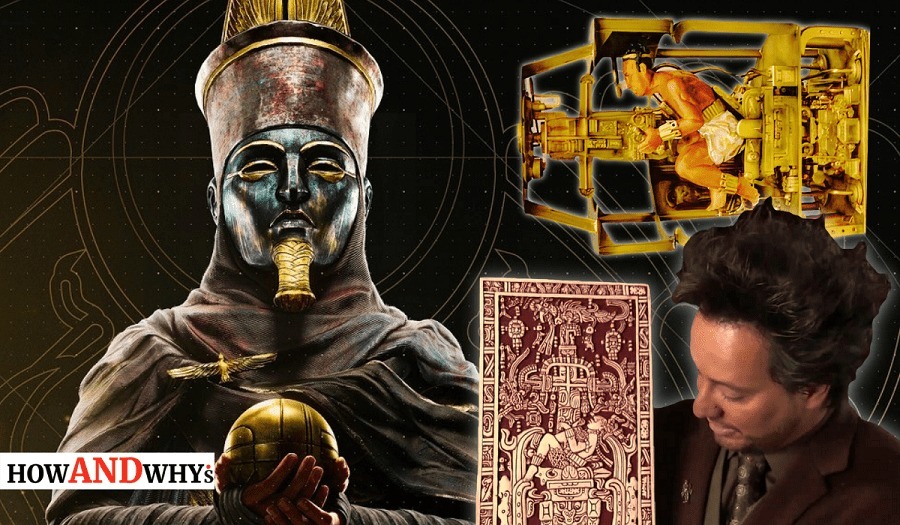 Was Mayan King ‘Pacal the Great’ Anunnaki God That Did Not Leave Earth?

One of the most important discoveries about the ancient Maya civilization is the mysterious Mayan astronaut engraved on the sarcophagus lid found in the tomb of “Pacal the Great” in the ancient Maya city of Palenque, located in the Sierra Madre de Chiapas, Mexico. The mysterious figure drawn on the lid is King Pakal (or Pacal), whose tomb was found in the “Temple of the Inscriptions” in 1952. 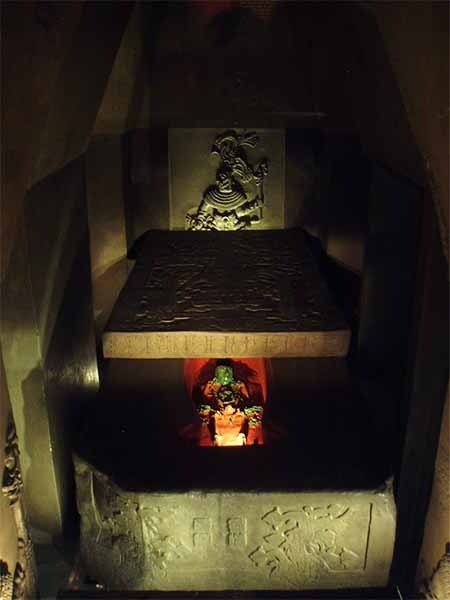 The enigmatic Tomb of Mayan King Pakal has attracted the interest of Ancient Astronaut Theorists like Zechariah and Erich von Daniken, who suggested that the carved sarcophagus lid found in his tomb depicted an Ancient Astronaut.

On the lid, as in his tomb, Pakal is positioned in an intermediary space surrounded by glyphs and symbols that run along the edges of the lid representing important components of Mayan cosmology. He was only 12 years old when got the throne of Palenque in 615 CE and ruled successfully until his death at the age of 80.

He is said to be the 7th ruler at such an early age. He built this modest-size Mayan city and turned it into the advanced urban place of Mesoamerica. According to mainstream historians, Sarcophagus tells the story of King Pakal’s death and descent into the underworld.

Alternatively, Erich von Daniken noted in his book “Chariots of the Gods” that the ruler is shown sitting inside some spaceship. He proposed that Palenque was one of the ancient sites that hints at the alien presence on Earth. On the basis of his observations, Ancient Astronaut Theorists stated that King Pakal may have been part of the race of Alien Ancient Astronauts that built Civilization on Earth.

Tomb of Pakal the Great from Palenque Mexico, Image Credit: National Museum of Anthropology in Mexico City
Pacal the Great was buried in the Temple of the Inscriptions, and a sarcophagus where his body was placed was surrounded by a crypt of 9 meters in length, with ceilings of 7 meters in height. In 1949, Mexican archaeologist Alberto Ruz Lhuillier entered it. He discovered numerous skeletons of victims sacrificed during the burial of Pacal the Great. He then visited the crypt which, according to his account, “seems to be dug in the ice. A kind of cave, whose walls and ceiling are so smooth that they seem to have been sanded. It is also reminiscent of an abandoned chapel, the dome of which is draped with stalactites, while stalagmites, thick as the drops of wax from a candle, rise from the ground.”

One of the most astonishing things that attracted archaeologists was the jade and obsidian mask made of mosaic, which covered the face of the deceased.

However, the greatest enigma of the tomb of Pakal was carvings on his sarcophagus lid, a 5-20 tons stone. A man dressed according to Mayan customs appears to be sitting inside a strange vehicle, and many claim that it is a spaceship. 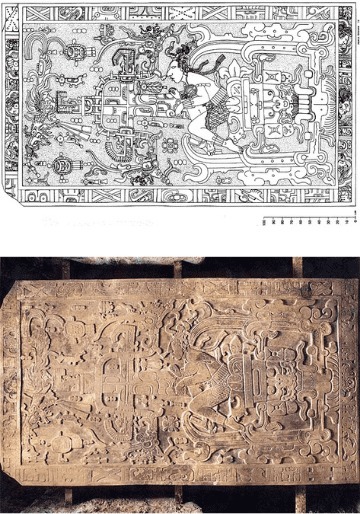 was his long nose. He even outwardly differs from ordinary people: a high nose cuts his forehead, and he had a narrow face with large eyes. Looking at other ancient figures, Pakal is not the only person with an elevated nasal root, this feature could also be seen in the ancient figurines excavated on the Jaina Island, an ancient Maya burial site of around 20,000 graves.
It is possible that the long noses, arising from the forehead could be in the DNA of ancient people, or might have belonged to a different human race. Besides ancient civilizations with elongated skulls, elevated nasal roots, unusual teeth, etc. could have belonged to the human race with different DNA. But the question is when did the DNA change so drastically? 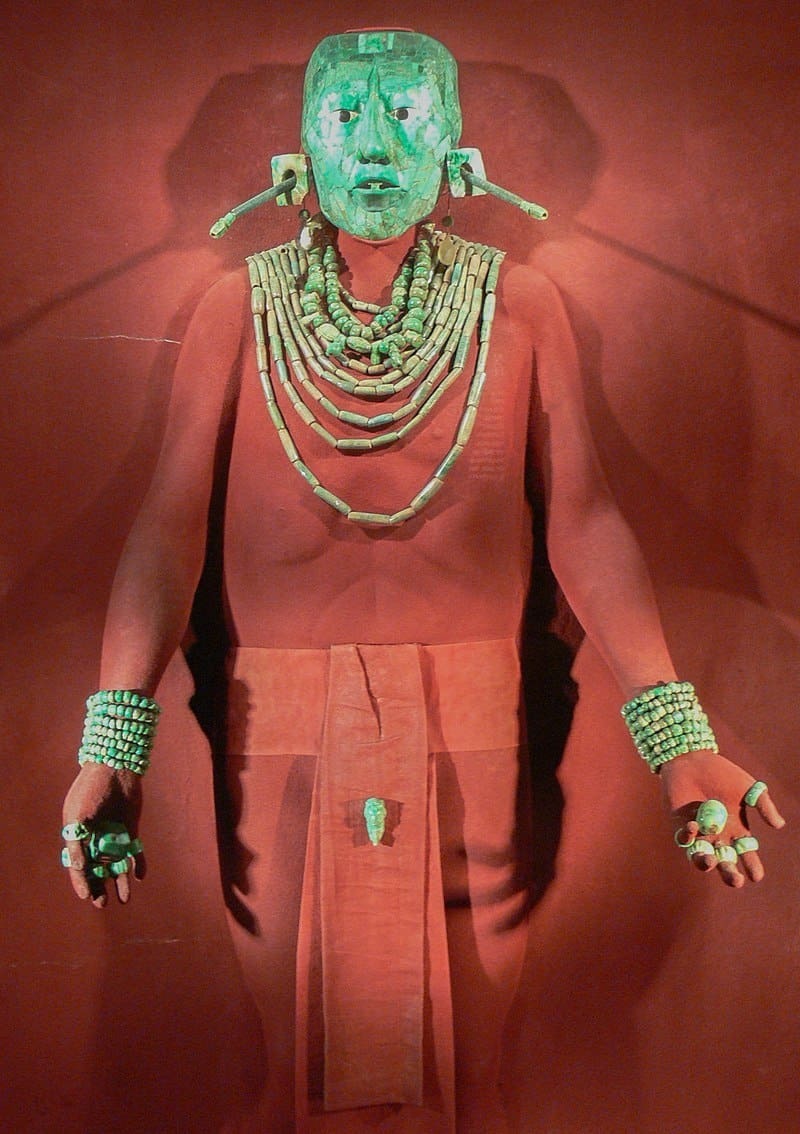 Mounted funerary jewelry of Kʼinich Janaab Pakal I.
Today, archaeologists have dismantled the ancient Mayan astronaut’s thesis, pointing out that the carvings on Pacal the Great’ sarcophagus lid are only a depiction of the afterlife: there are all the symbolic elements, easily identifiable in the images illustrating the journey of the soul of the deceased to the world of the dead. Despite official denials, many still believe that this strange figure, dressed like a Mayan warrior, is an alien whom the men of Palenque encountered and immortalized on stone 2,000 years ago.

In his book “The Lost Realms,” Zecharia Sitchin demonstrates that similarities exist between the Burial rites of Pharaohs in Ancient Egyptian Tombs and those observed in King Pakal’s Tomb. Scholars have also admitted that one cannot avoid an implicit comparison between Pakal’s Tomb and the crypts of the Egyptian Pharaohs, especially the funerary scene symbols depicting the journey to an afterlife.

These connections that come out of applying the Ancient Astronaut Hypothesis to King Pakal’s Tomb and the History of the Mayan Civilization, in general, suggest that King Pakal may have belonged to the Anunnaki that brought Civilization to Earth.

Considering the Sumerian tablets about Kings list, by the time of Pakal’s death, the vast majority of Anunnaki had already left earth. Is it possible Pakal was an Anunnaki that stayed behind, with his sarcophagus depicting his return to the Anunnaki Home Planet Nibiru?