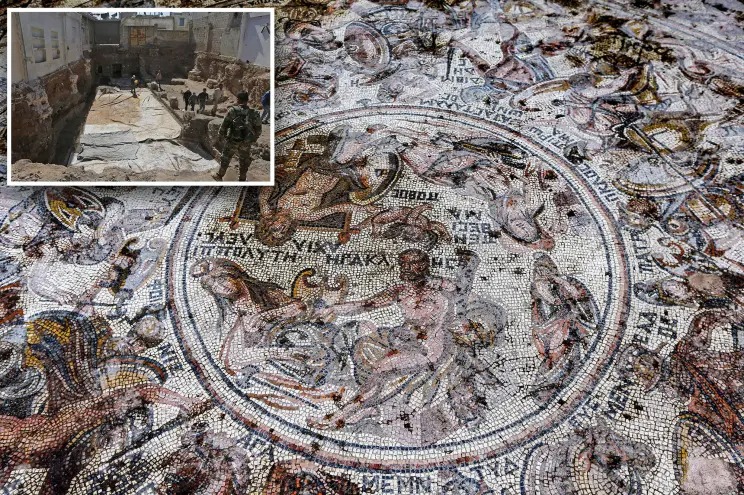 Warriors in the Trojan War: Dazzling Roman mosaic discovered in the town of Rastan brings hope and pride to Syrians

Syria was long known for its archaeological importance with many unrivalled world heritage sites ranging from the ancient desert city of Palmyra to Damascus’ Umayyad mosque. Now a remarkably intact 1,600-year-old Roman mosaic has been unearthed.

In a rare archaeological coup for the war-torn country, a spectacular Roman-era mosaic floor – well preserved and highly detailed – thought to date back over 1600 years was unearthed near an old building in Rastan, a former rebel stronghold in Homs province.

“We are facing a rare and very important discovery, not at the level of the region but the global level”
The Mosaic design presents a stunning visual depiction of an enormous 120 square metres which was slowly revealed after excavation efforts by Syria’s General Directorate of Antiquities and Museums and shows fierce soldiers carrying swords and shields, seemingly from the Trojan War between Troy and Greece in the 12/13th century. 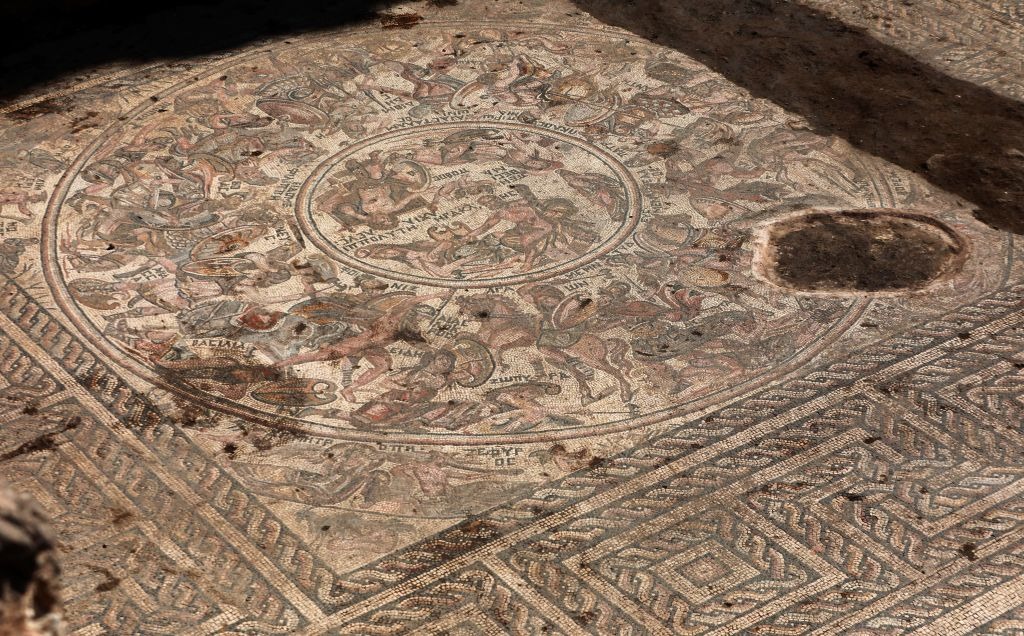 The mosaic is the latest to be found in Rastan, which the regime seized back from rebels in 2018 after years of bloodshed [Getty]

So far, 65 feet have been uncovered of the meticulous mosaic, which potentially served as a floor for an ancient bathhouse.

Archaeological water channels were found nearby, reiterating the potentiality that it could have been a hammam or a communal bath as work continues on the surrounding areas to obtain a clearer picture of what else could be there in the vicinity of the excavation.

The Director of the Mission to excavate the mosaic Dr Hummam Saad told The New Arab that this find is huge for the country. “We are facing a rare and very important discovery, not at the level of the region but the global level.”

He adds: “This is a mosaic that is unparalleled in the world, dating back to the fourth century AD, it is truly distinguished by its size and in good condition despite the succession of ages.”

While Syrian archaeologists and antiquities experts have been quick to declare a potentially unequalled discovery, their Western counterparts have viewed the discovery with much interest, especially due to the near-perfect condition of the artwork.

Lawrence Payne, an expert mosaicist observed that the finding and the design were clearly to a high degree of detail. “The geometric patterns stand out straight away as being done to a very high standard of work. The double and four-strand plait patterns (correct name ‘guilloche’) are fairly common but still well done,” he told The New Arab.

“I don’t detect any particular significance to the choice of designs. The figures are well made, especially in the way the mosaicists have shown shading and musculature.” 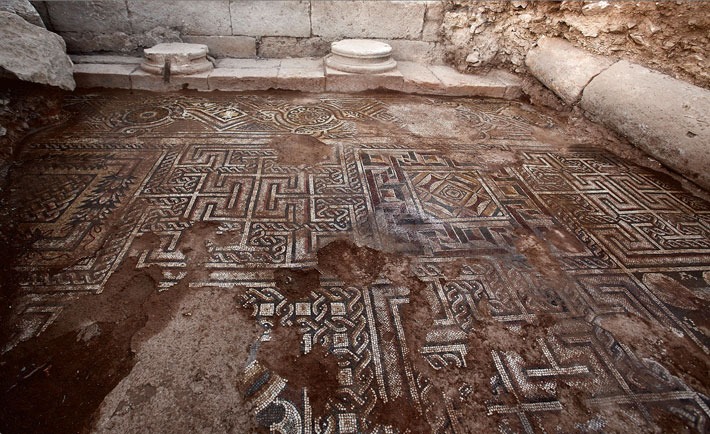 The mosaic includes depictions of warriors in the Trojan War, with authorities hailing it as one of the ‘rarest’ finds [Getty]

Payne continues that the mosaic stands up well to initial scrutiny: “What does stand out is the way they do not seem to have attempted to space them out [depicted figures] as a considered composition as you might get in a painting, rather, they have added in as many figures as possible in the space they have. A feature in Roman mosaics is that the story/myth shown is more important than the skill of the mosaicist, it appears straight away as something of a high standard of execution.”

The expert sees similarities between the mosaic found in Rastan and another recent find in the United Kingdom: “This does remind me of the recent discovery in the UK of a mosaic that also depicts scenes from the Trojan war. That one was dated to the 3rd/4th century CE, the standard was very much below the one [mosaic] found at Rastan, but it does show how the Trojan war was a subject that came up in life from parts of the Roman world so far apart.”

“A feature in Roman mosaics is that the story/myth shown is more important than the skill of the mosaicist, it appears straight away as something of a high standard of execution”
While the unearthed mosaic will certainly pave way for more assessments and research, it has served as a positive news story for many Syrians, especially residents of Rastan.

“We did not know we were living next to this beauty, it had been concealed from us for so long,” says 26-year-old local resident Yasser Ahmad. “With the situation in the country and the war before, it’s good to hear something refreshing and to see a new sight, to give us some hope and to be proud again of our history.”

The exceptional importance of this painting is that it constitutes a scene of the “Trojan” war, which dates back to the fourth century AD, and is also exceptional in this painting, the details contained in it and the degree of preservation, it is in good physical condition, and the Directorate will allow visitors to view it.

“With the situation in the country and the war before, it’s good to hear something refreshing and to see a new sight, to give us some hope and to be proud again of our history”
Syria was long known for its archaeological importance with many unrivalled world heritage sites ranging from the ancient desert city of Palmyra to the Umayyad mosque in Damascus.

Much of that history was well preserved but has fallen foul of bad upkeep, conflict and general negligence. Indiscriminate regime bombardment or deliberate destruction by the Islamic State group and other extremists has led to the destruction of many of Syria’s cultural heritage pieces.

The discovery of this rare mosaic floor and the attention generated may be just what the country needs on the cultural and archaeological level to redirect the compass that had been eaten away by a decade of war.

Danny Makki is an analyst covering the internal dynamics of the conflict in Syria, he specialises in Syria’s relations with Russia and Iran.