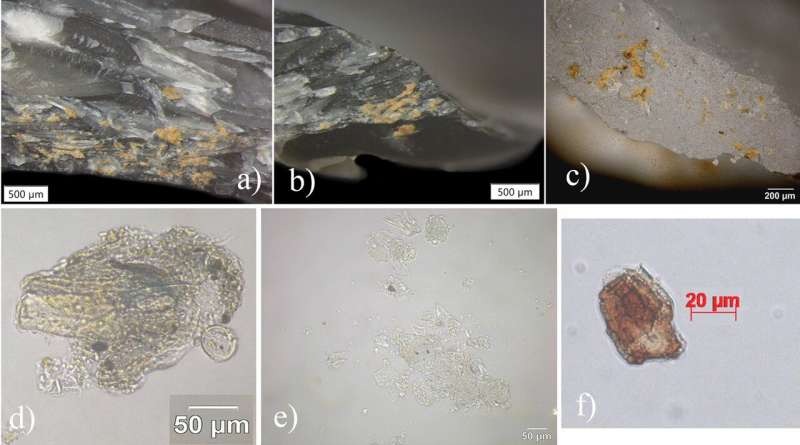 When prehistoric people re-sharpened cutting tools 300,000 years ago, they dropped tiny chips of flint—which today yield evidence of how wood was processed by early humans. The small flint flakes were discovered at the Lower Paleolithic site of Schöningen, Lower Saxony. 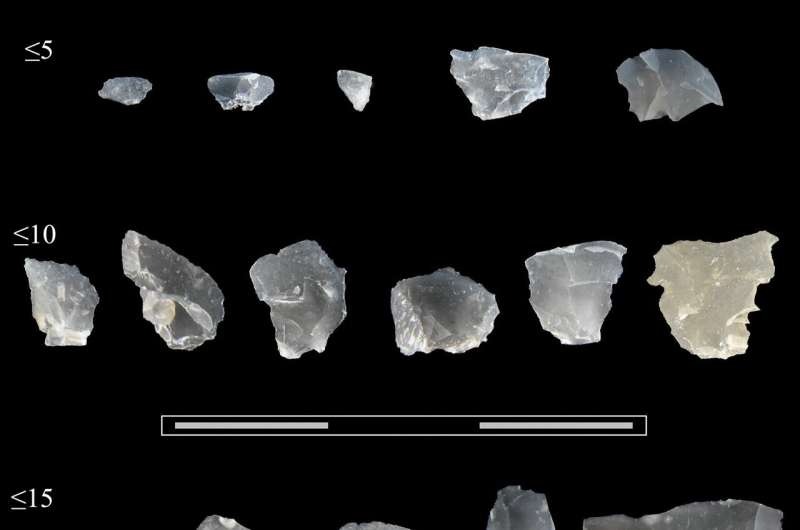 Now, a multidisciplinary team led by the University of Tübingen and the Senckenberg Center for Human Evolution and Paleoenvironment (SHEP) in Tübingen has analyzed this very old material for the information it can provide. The study has been published in Scientific Reports.

The 57 small stone chips and three bone implements for re-sharpening stone tools were discovered around the skeleton of a Eurasian straight-tusked elephant that had died on the shore of a lake about 300,000 years ago.

“We can prove, among other things, from these finds that people—probably Homo heidelbergensis or early Neanderthals—were in the vicinity of the elephant carcass,” says Dr. Jordi Serangeli, director of the archaeological excavations in Schöningen. “This site is located about two meters below the famous site of the world’s oldest spears,” he adds.

A snapshot of Stone Age life

Tübingen researcher Flavia Venditti, the study’s lead author, says the story of the Stone Age is told mainly via the study of objects worked by our ancestors. “One is inclined to believe that large tools such as knives, scrapers and points are more significant than simple flakes, especially when they are small and really just a byproduct of tool production. But even microscopic stone chips, in the context of the overall evidence, can tell us a lot about the way of life of our ancestors,” she says.

Most of the fragments studied were smaller than one centimeter, Venditti reports. “Through a multidisciplinary approach that included technological and spatial analysis, the study of residues and signs of use, and methods of experimental archaeology, we were able to obtain more of the Stone Age story from these stone chips,” Venditti says. “The small flakes come from knife-like tools, they were knocked off during re-sharpening.” The chips fell to the ground, where they stayed when the people moved on with their tools, she said.

Fifteen pieces showed signs of use typical of working fresh wood. “Microscopic wood residues remained attached to what had been the tool edges,” Venditti says. In addition, micro use-wear on a sharp-edged natural flint fragment proved that people used it to cut fresh animal tissue. “Probably this flint was used in the butchering of the elephant,” she says.X

These results are further evidence of the combined use of stone, bone, and plant technologies 300,000 years ago, as has been documented several times in Schöningen, Venditti says. Professor Nicholas Conard from Tübingen and head of the Schöningen research project emphasizes that “this study shows how detailed analyses of traces of use and micro-residues can provide information from small artifacts that are often ignored. This is the first study to produce such comprehensive results from 300,000 years old re-sharpening flakes. The prerequisite for this kind of research is that the artifacts are handled with extreme care from excavation throughout the analyses.”

The archaeological excavation at the Paleolithic sites in Schöningen and the scientific investigation are a long-term project of the University of Tübingen in cooperation with the Senckenberg Nature Research Society and the State Heritage Office of Lower Saxony.