The Olmec Capital of La Venta – History and Archaeology

Olmec Head at La Venta, Tabasco, Mexico. Adalberto Rios Szalay / Sexto Sol / Getty Images Plus
By K. Kris Hirst
Updated on October 27, 2019
The Olmec capital of La Venta is located in the city of Huimanguillo, in the state of Tabasco, Mexico, 9 miles (15 kilometers) inland from the Gulf coast. The site is perched on a narrow natural elevation approximately 2.5 mi (4 km) long which rises above the wetland swamps on the coastal plain. La Venta was first occupied as early as 1750 BCE, becoming an Olmec temple-town complex between 1200 and 400 BCE.

Architecture at La Venta
La Venta was the primary center of the Olmec culture and likely the most important regional capital in non-Maya Mesoamerica during the Middle Formative period (approximately 800–400 BCE). In its heyday, La Venta’s residential zone included an area of about 500 acres (~200 hectares), with a population numbering in the thousands.

Most of the structures at La Venta were built of wattle-and-daub walls placed atop earthen or adobe mudbrick platforms or mounds and covered with a thatched roof. Little natural stone was available, and, apart from the massive stone sculptures, the only stone used in public architecture was a few basalt, andesite and limestone foundational support or internal buttresses.

The 1 mi (1.5 km) long civic-ceremonial core of La Venta includes over 30 earthen mounds and platforms. The core is dominated by a 100 foot (30 m) high clay pyramid (called Mound C-1), which has been heavily eroded but was likely the largest single building at the time in Mesoamerica. Despite the lack of native stone, La Venta’s artisans crafted sculptures including four “colossal heads” from massive blocks of stone quarried from the Tuxtla Mountains approximately 62 mi (100 km) to the west.

Plan of La Venta. Yavidaxiu, MapMaster
The most intensive archaeological investigations at La Venta were conducted in Complex A, a small group of low clay platform mounds and plazas within an area of about 3 ac (1.4 ha), located immediately north of the tallest pyramidal mound. Most of Complex A was destroyed shortly after the excavations in 1955, by a combination of looters and civic development. However, detailed maps of the area were made by the excavators and, due primarily to the efforts of U.S. archaeologist Susan Gillespie, a digital map of the buildings and construction events at Complex A has been made. 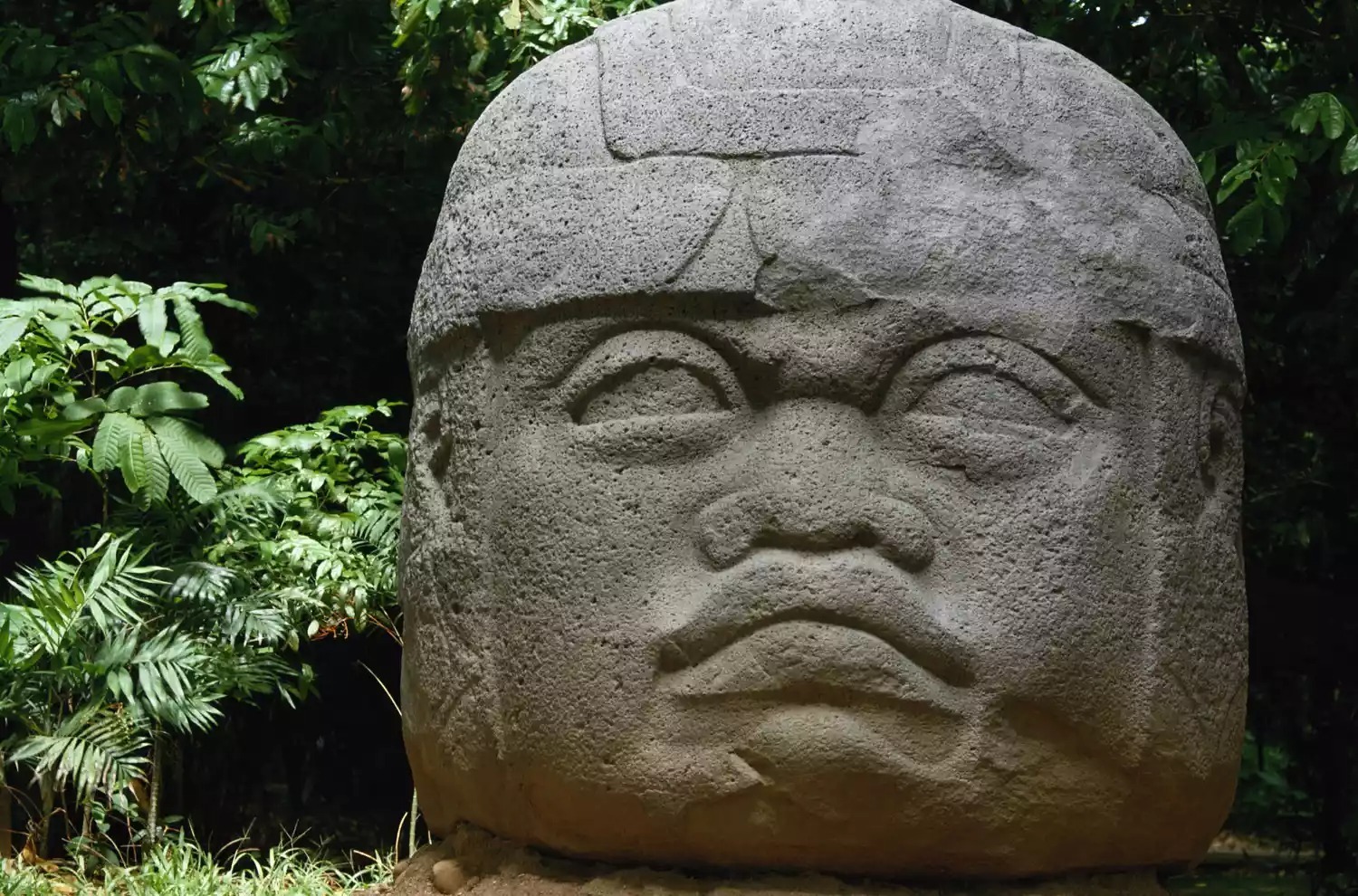 Subsistence Methods
Traditionally, scholars have attributed the rise of Olmec society to the development of maize agriculture. According to recent investigations, however, the people at La Venta subsisted on fish, shellfish and terrestrial faunal remains until about 800 BC, when maize, beans, cotton, palm, and other crops were grown in gardens on relict beach ridges, called tierra de primera by maize farmers today, perhaps fueled by long-distance trade networks.

U.S. archaeologist Thomas W. Killion conducted a survey of paleobotanical data from several Olmec period sites including La Venta. He suggests that the initial founders at La Venta and other Early Formative sites such as San Lorenzo were not farmers, but rather were hunter-gatherer-fishers. That dependence on mixed hunting and gathering extends well into the Formative period. Killion suggests that the mixed subsistence worked in the well-watered lowland environments, but that a wetland environment was not suited to intensive agriculture.

La Venta and the Cosmos
La Venta is oriented 8 degrees west of north, like most Olmec sites, the significance of which is obscure to date. This alignment is echoed in Complex A’s central avenue, which points to the central mountain. The central bars of each of La Venta’s mosaic pavements and the four elements of the quincunxes in the mosaics are positioned at intercardinal points.

Complex D at La Venta is an E-Group configuration, a specific layout of buildings identified at over 70 Maya sites and believed to have been designed to track movements of the sun. 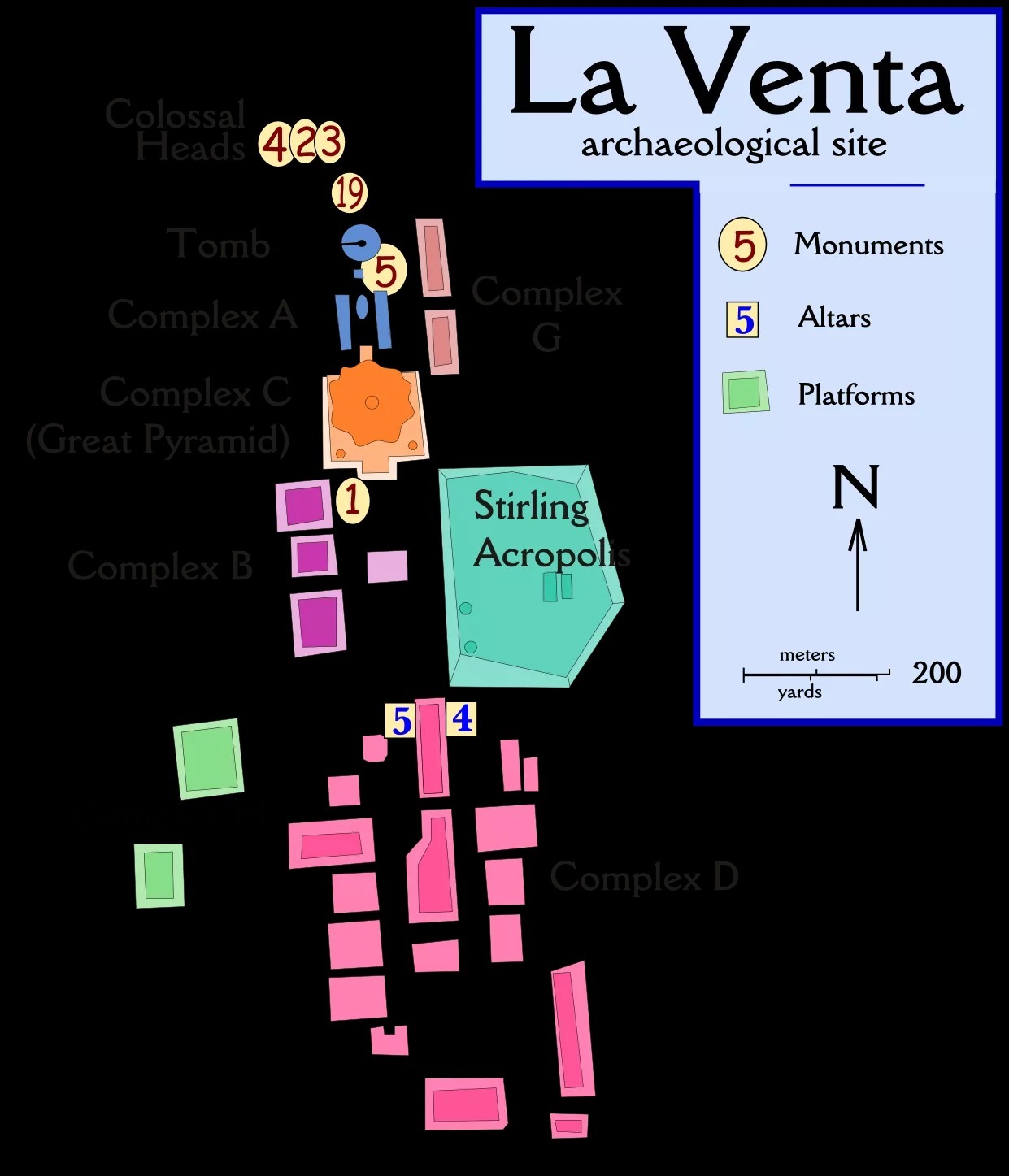 Writing
A cylinder seal and a carved greenstone plaque discovered at the San Andres site 3 mi (5 km) from La Venta provided early evidence that writing in the Mesoamerican region had its start in the Mexican Gulf Coast region by about 650 BCE. These objects bear glyphs that are related to but different from the laster Isthmian, Mayan, and Oaxacan styles of writing.

Archaeology
La Venta was excavated by members of the Smithsonian Institution, including Matthew Stirling, Philip Drucker, Waldo Wedel, and Robert Heizer, in three major excavations between 1942 and 1955. Most of this work was focused on Complex A: and the finds from that work were published in popular texts and La Venta quickly became the type site for defining the Olmec culture. Shortly after the 1955 excavations, the site was badly damaged by looting and development, although a brief expedition did retrieve some stratigraphic data. Much was lost in Complex A, which was torn up by bulldozers.

A map of Complex A made in 1955 formed the basis for digitizing the field records of the site. Gillespie and Volk worked together to create a three-dimensional map of Complex A, based on archived notes and drawings and published in 2014.

The most recent archaeological studies have been undertaken by Rebecca González Lauck at the Instituto Nacional de Antropología e Historia (INAH).