The Forum: Epicenter of the Mighty Roman Empire

Italy takes pride in its long history and is home to some of the most famous architectural monuments, as well as archaeological locations. The Roman Forum was the heart, not only of the city, but also the vast Roman Empire for centuries. Remains of this astounding UNESCO World Heritage site include temples built to the powerful gods, public buildings where emperors once stood, and paved roads where the proud citizens could watch the processions of the victorious armies.

The History of The Roman Forum, Rome

Originally a grassy wetland but drained into the Tiber River in the 7 th century BC, the Forum became the main public space of the city since its foundation in the 8 th century BC. The legendary founder and first king of Rome, Romulus, was the first to build on the site. Rome’s second king, Numa Pompilius , built the House of the Vestal Virgins and the Vesta Temple to honor the virgin goddess of home and family. He created a central area for political and religious life in the city when he built the Regia, the city’s first royal palace on the edge of the Forum which later housed the office of the pontifex maximus , the chief priest.

As the Forum was the commercial heart of the city and thronged with merchants, it was likely the most convenient place to hold public meetings and capture the ear of the citizens. Officials and orators spoke to the populace from a rostra, a raised platform facing the Senate House where the elite and politicians gathered away from the crowds. Occasionally emotions ran high and tempers flared. In the second century BC, Tiberius Gracchus , who tried to reform the Roman Republic and dared to suggest that money be distributed to the poor, was beaten to death by chairs along with many of his followers. The Forum was not only designed for politics and worship – in this central public space elections as well as judiciary trials, funerals and even the first gladiatorial games were held. From the 3 rd century BC, the Romans held triumphal processions in the area, celebrating their victories over their enemies in grand style.

As the Romans expanded their empire in the Mediterranean and grew wealthier, they built elaborate monuments such as the Basilica around the Forum. The magnificent construction was originally a public building where courts were held, as well as serving other official and public functions. Leading Republican generals and politicians also erected structures in the area to display their power. 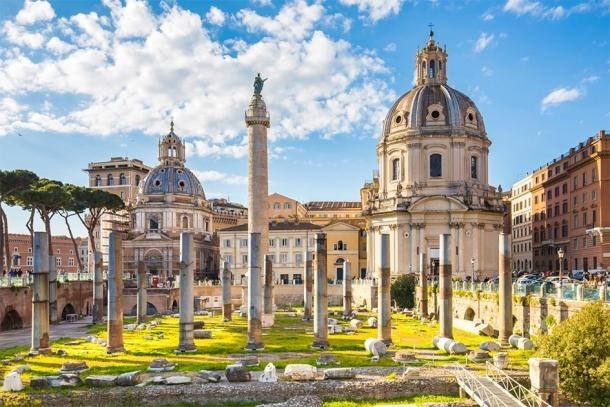 Following the death of Julius Caesar and decades of civil war, Emperor Augustus finished the rebuild started by his uncle, Julius, and erected many temples and shrines as part of his restoration of the city. Subsequent emperors enhanced and added to the Forum, including Emperor Trajan and Septimius Severus . Glorious triumphal processions continued to entertain the citizens.

By the Imperial era, the Forum was the religious and ceremonial center of Rome, but it was no longer the political and commercial heart of the city. After the Christianization of Rome, the Christians built several churches. 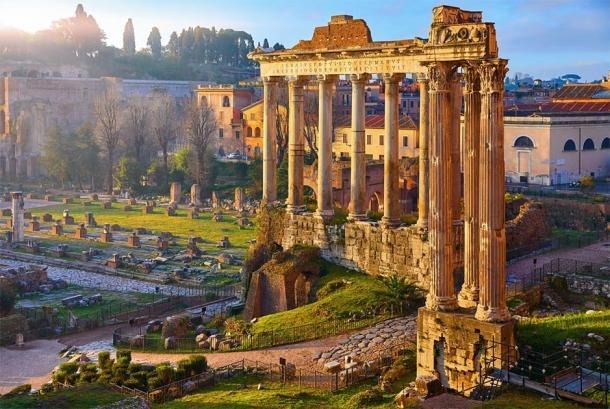 Remains of the oldest Forum building, the Temple of Saturn ( Yasonya / Adobe Stock)

After the Gothic Wars in the 6 th century AD, the city went into decline. Even as the city became depopulated, the area was left largely intact until the Normans sacked the area in the 11 th century. Over the decades, old buildings were dismantled as new ones were built. The city experienced the worst damages during the Italian Renaissance when many Forum monuments were dismantled for building materials by successive popes, including Pope Paul III who built St Peter’s Basilica .

It was only the 18 th century that efforts were made to protect the Forum and from the 19 th century restoration started on the former heart of ancient Rome. Archaeological digs continue at the site.

The Grandeur and The Glory of The Roman Forum

The Forum is located between the Capitoline and the Palatine Hills. Although the area holds a treasure of architectural remains, among the most important include the columns and the stairs of the Temple of Saturn, the oldest building in the Forum which also functioned as a bank, and the colonnade of the Temple of Castor and Pollux. A substantial part of the Temple of Vesta, where the Vestal Virgins tended the eternal flame for centuries, is still intact.

Several triumphal arches built by victorious emperors remain, including those of Septimius Severus, Titus, and Constantine. Sadly, the Senate House and rostra have all but disappeared, but some of the ancient roads with their original paving stones and streets can still be walked. 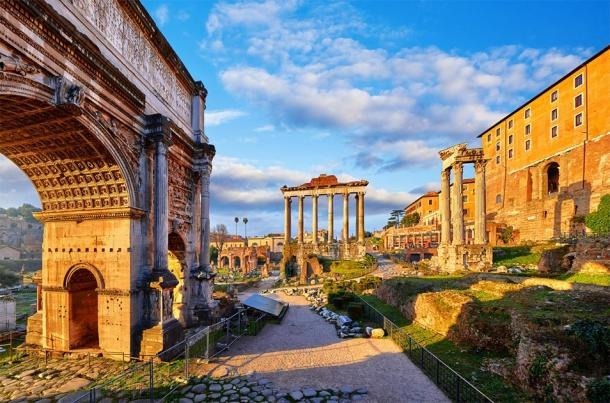 The Triumphal arch of Titus on the left, The Forum, Rome ( Yasonya / Adobe Stock)

Of particular importance is the Via Sacra, the main street of ancient Rome and traditional route of their triumphs which stretched from the top of Capitoline Hill and passed the most important shrines on the way to the Colosseum. The remains of two sacred springs, which are believed to pre-date the city can be seen in the Forum along with a number of early medieval churches built in the Romanesque style. These are among the earliest Christian houses of worship in the world. 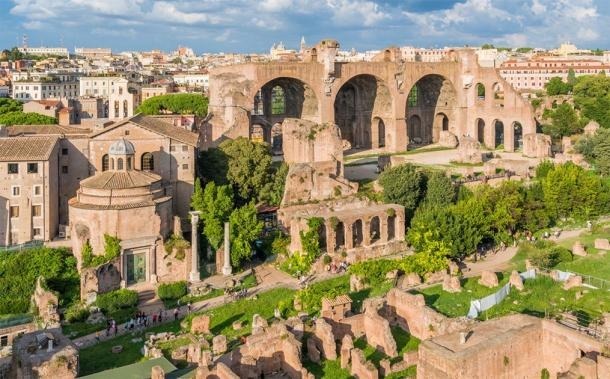 Perhaps the most interesting of these is the circular basilica Santi Cosma e Damiano, which was dedicated to Valerius Romulus, son of the emperor Maxentius, and thought to house the library of the Forum in the main building.

When in Rome, Visit the Forum

Located in the heart of Rome, the site is open almost all year round and guided tour are available. There are many other important historical attractions nearby, including the Colosseum.