A rare core sample, removed years ago, contains a form of quartz that doesn’t erode or crumble. 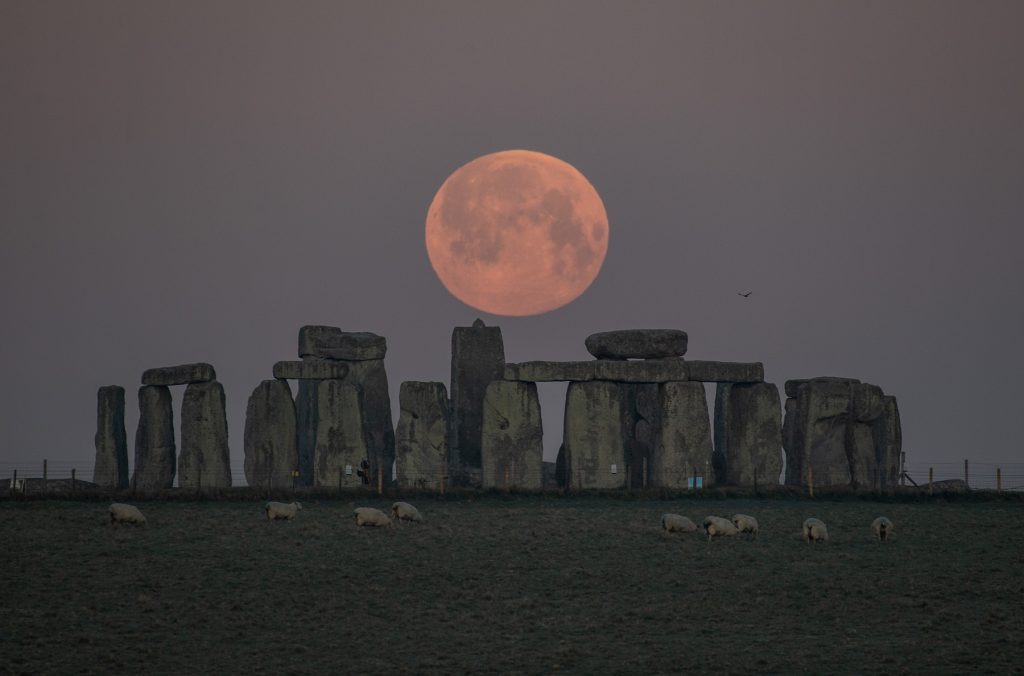 The full moon sets behind Stonehenge on April 27, 2021 in Amesbury, England. Photo by Finnbarr Webster/Getty Images.
A long lost piece of England’s Stonehenge monument is helping experts understand the mysterious prehistoric structure. Analysis of a core sample taken from one of the site’s massive slabs suggests that the stone’s geochemical composition may have made it uniquely well-equipped to stand the test of time.

Made from 99.7 percent quartz crystals, the stones are practically indestructible, according to a new study published in the journal Plos One.

“Now we’ve got a good idea why this stuff’s still standing there,” study co-author David Nash, a professor of physical geography at the University of Brighton, told Business Insider. “The stone is incredibly durable—it’s really resistant to erosion and weathering.”

The study was made possible thanks to a former diamond cutter, Robert Phillips, who died last year. He did repair work at Stonehenge in 1958, drilling into Stone 58 to help re-erect a fallen trilithon of three stones. 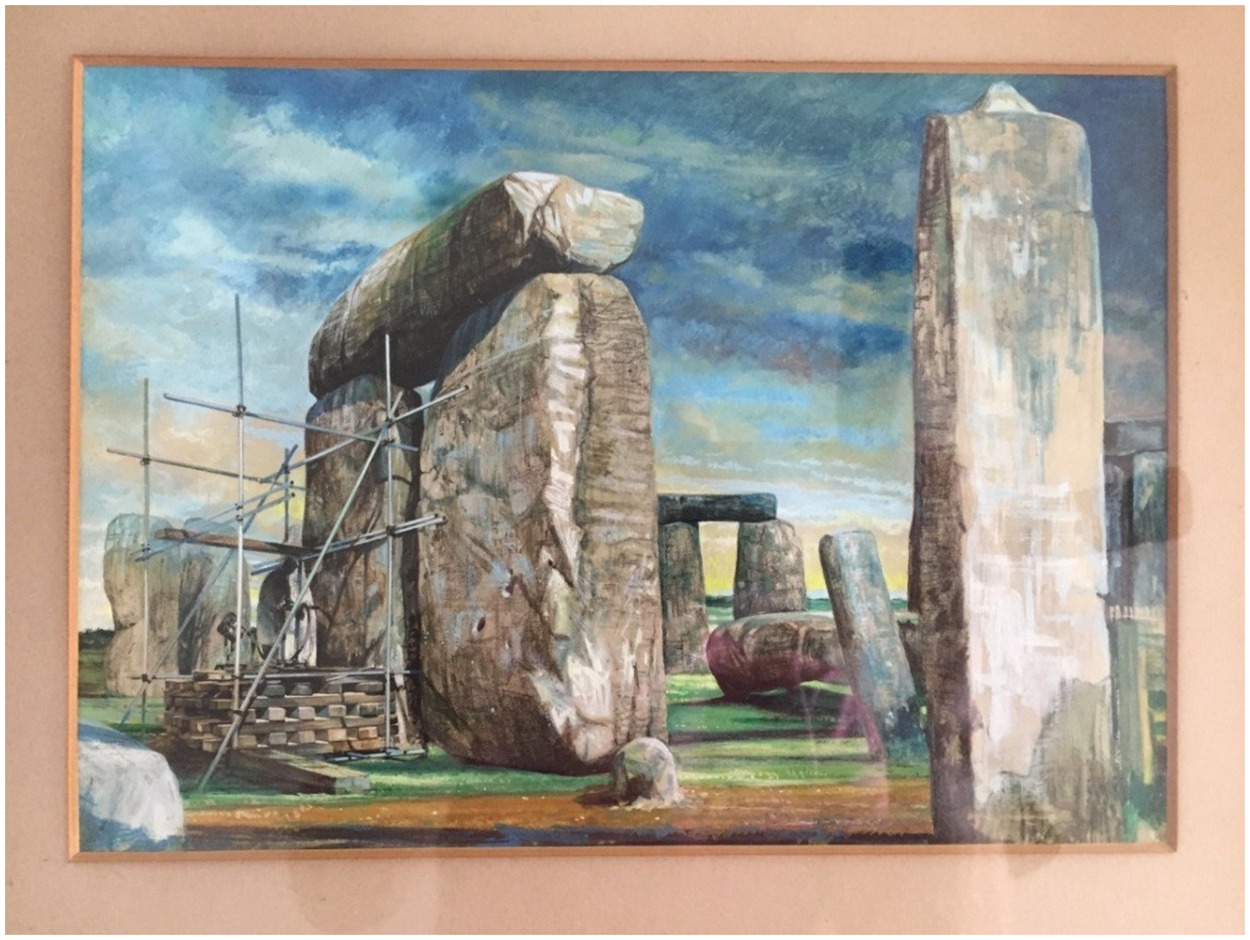 When the work was done, Phillips was allowed to keep one of the three-and-a-half foot cylindrical cores as a souvenir. He returned it 60 years later, opening new avenues of research into Stonehenge’s origins—taking new samples from the protected monument is prohibited. Experts were able to conduct destructive testing on half the sample.

“Getting access to the core drilled from Stone 58 was very much the Holy Grail for our research,” Nash said in a statement. “It is extremely rare as a scientist that you get the chance to work on samples of such national and international importance.” 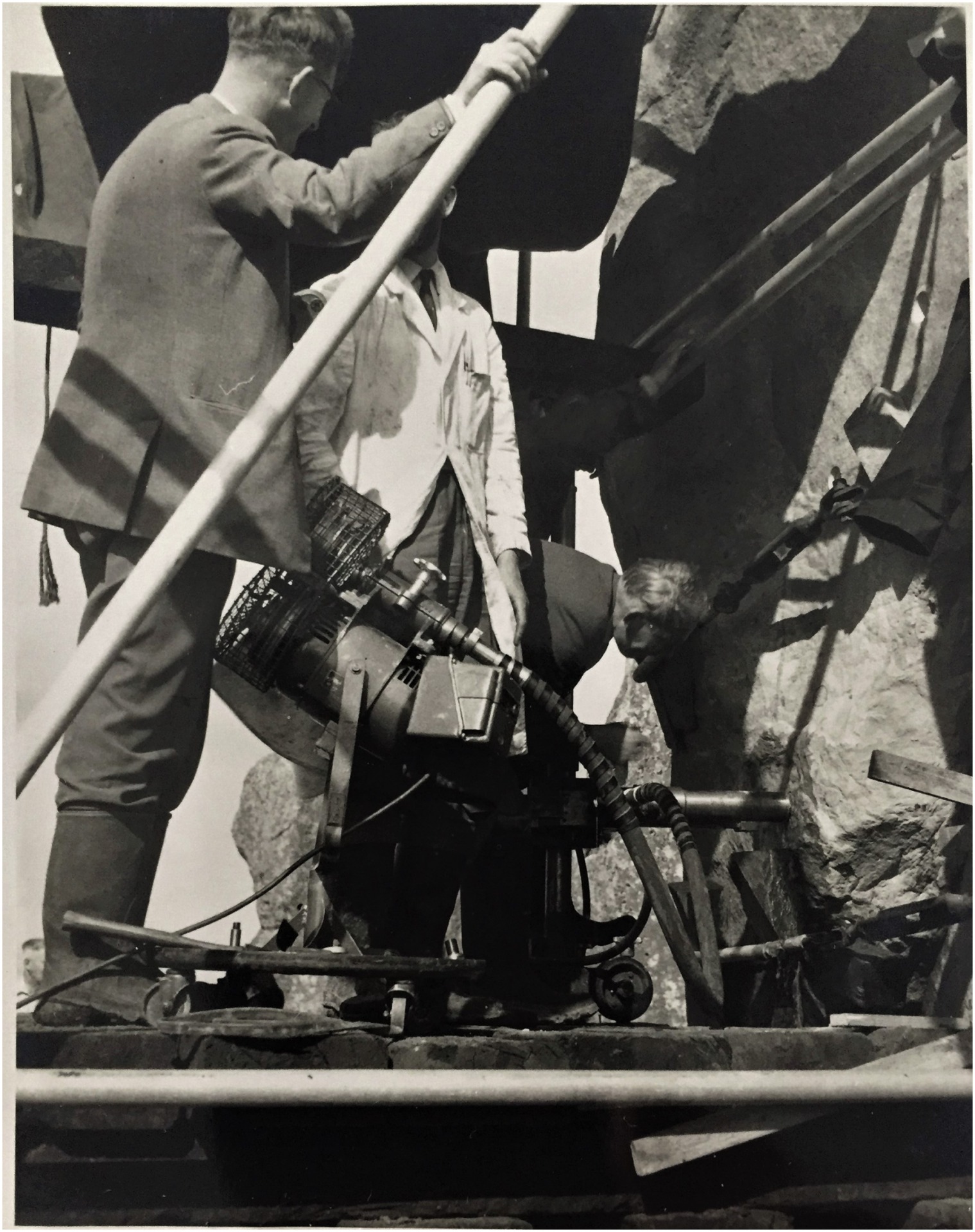 Working with experts from British Geological Survey, English Heritage, and the Natural History Museum in London, Nash subjected the Phillip’s Core, as it is known, as well as a second sample from the Salisbury Museum in England, to X-ray and CT scans, examining them under a microscope. What they saw were tiny grains of quartz arranged in an incredibly strong interlocking matrix of crystals, providing an ideal building material.

“These cements are incredibly strong. I’ve wondered if the builders of Stonehenge could tell something about the stone properties, and not only chose the closest, biggest boulders, but also the ones that were most likely to stand the test of time,” Nash told Science Alert. 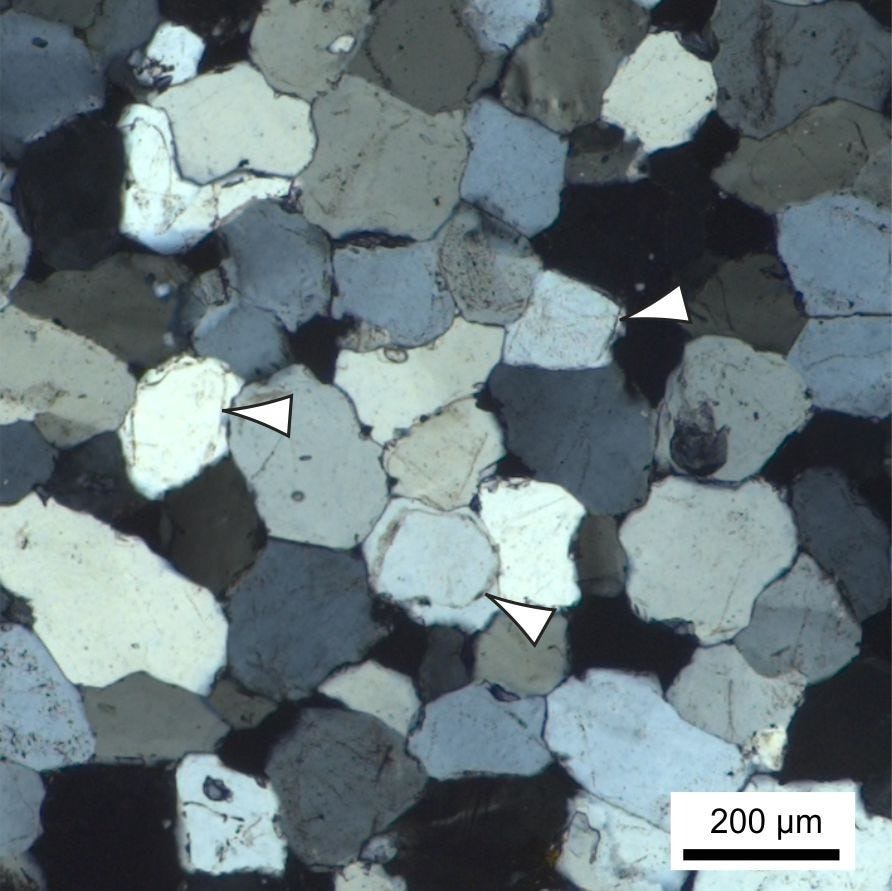 A microscope image of the sample from Stonehenge’s Stone 58 shows a tightly interlocking mosaic of quartz crystals. The outlines of quartz sand grains are indicated by arrows. Photo courtesy of the Trustees of the Natural History Museum.

Geochemically, the Stone 58 sample is a match to 50 of the 52 remaining sarcens, so any findings derived from the cores likely apply to the vast majority of the monument. The specific kind of stone is called silcrete, which forms from groundwater washing though buried sediment, reports Reuters.

Dating found that the stones were largely composed of eroded sediments from the Paleogene period, from 66 million to 23 million years ago. 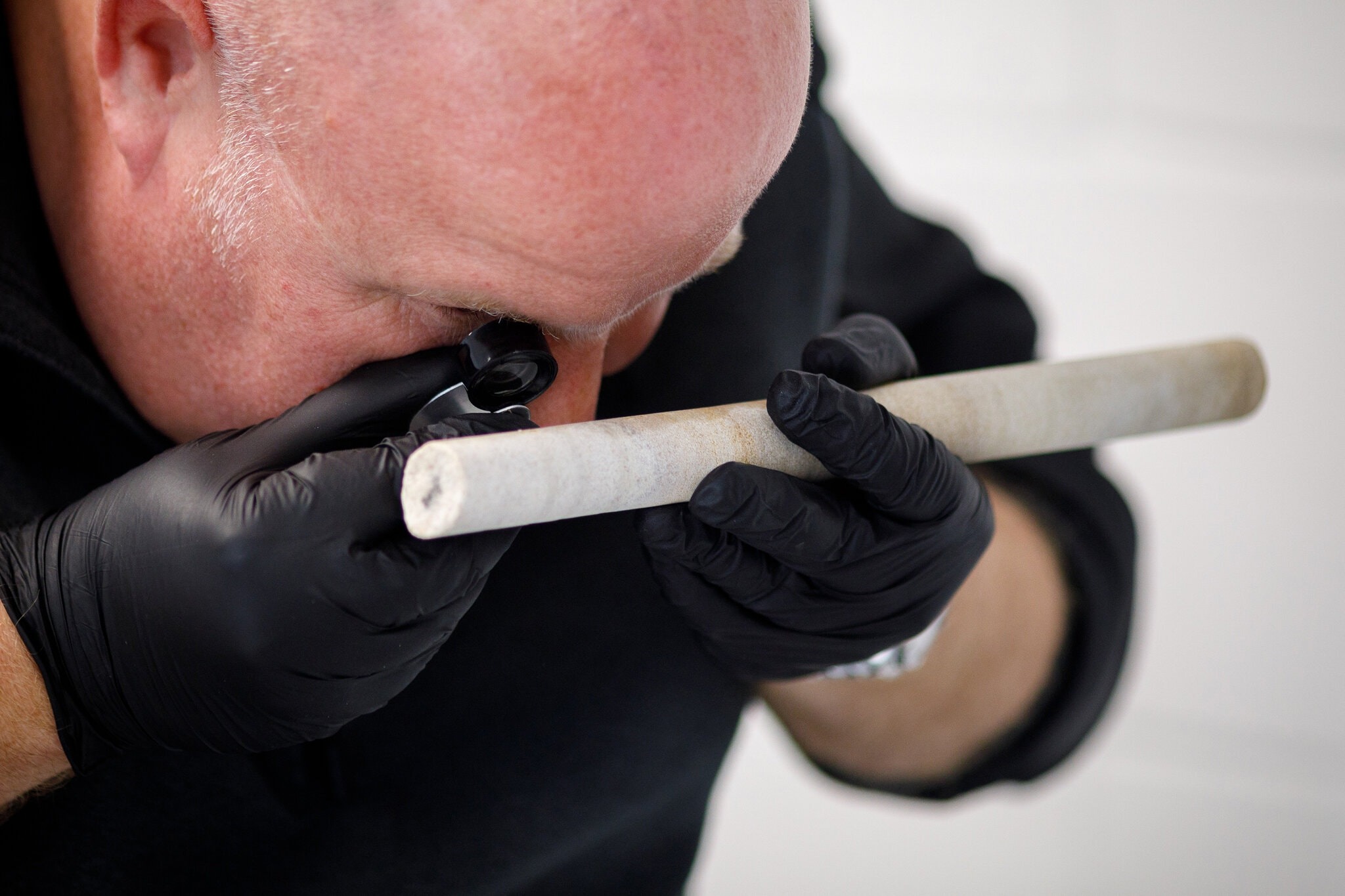 University of Brighton geomorphologist David Nash examines a core sample removed from Stonehenge during repairs in the 1950s. Photo by Sam Frost, courtesy of English Heritage.

But they also incorporate much older material from the Mesozoic era, between 252 million and 66 million years ago, and the Mesoproterozoic era, an astounding 1 billion to 1.6 billion years ago.

The Phillilp’s Core had already allowed Nash and his team to solve one of Stonehenge’s most enduring mysteries: the origin of its monolithic stones. 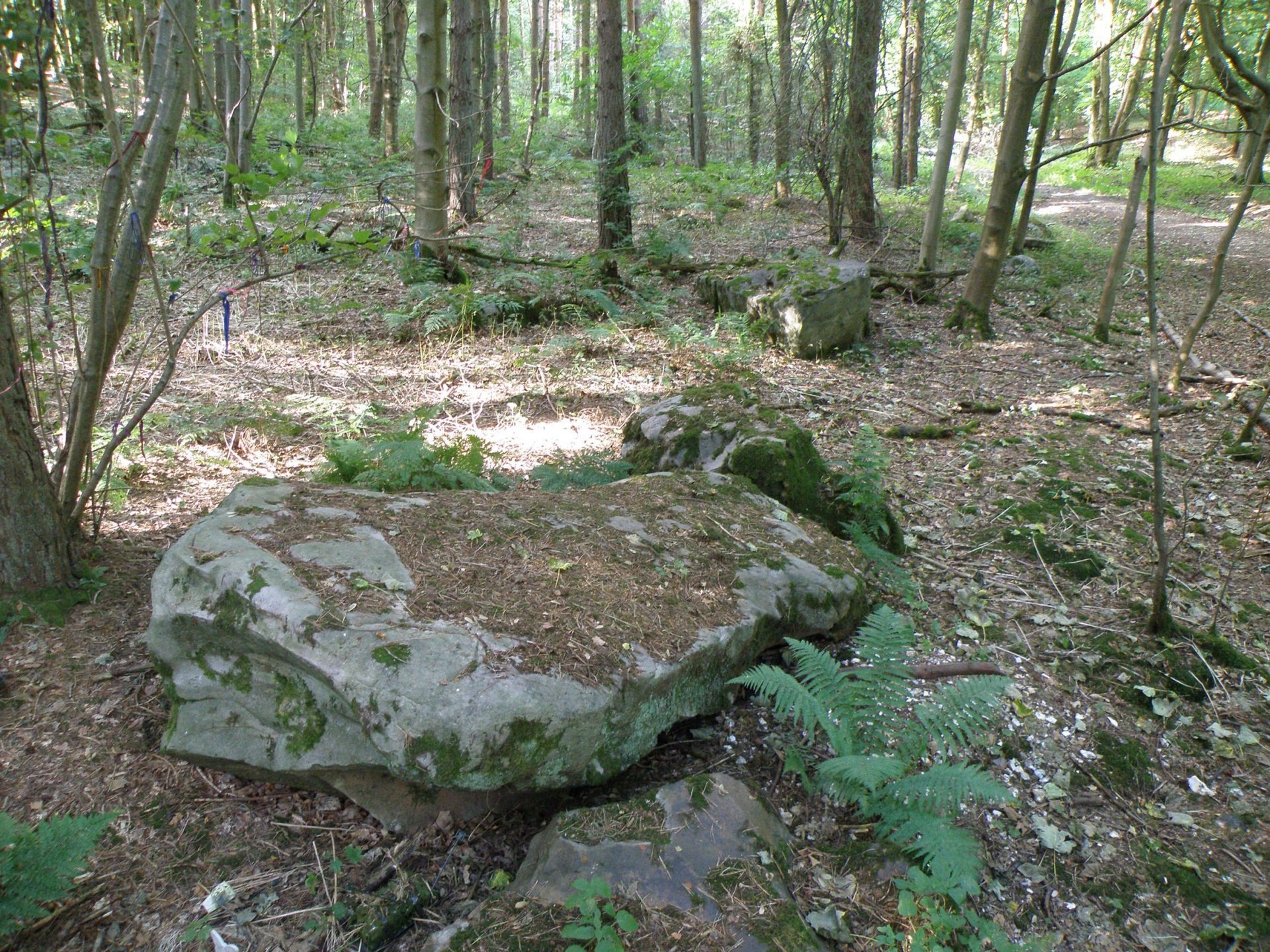 A sarsen, like the ones at Stonehenge, in the West Woods, now known to be the origin of the prehistoric monument’s massive stone slabs. Photo by Katy Whitaker, courtesy of Historic England/the University of Reading.

It was long suspected that the sarcens came from the chalk hills of Marlborough Downs. Testing on the Philips Core allowed researchers to identify the stone’s “geochemical fingerprint,” and match it to stone slabs from a specific location in the downs known as the West Woods.

Stonehenge was likely erected in two phases between 5,000 and 4,500 years ago. In addition to the massive sarcens, the monument also includes an interior circle of smaller bluestones. Recent studies suggest that the bluestones hail from the Preseli Hills in Wales, and were initially built there, before being transported to the Salisbury Plain.