The ruins of an early-18th-century complex that could once house up to 12,000 horses.

The Royal Stables of Meknes. FLICKR/KRISTOF ARNDT (CC BY ND 2.0)

DURING THE REIGN OF SULTAN Moulay Ismail, between 1672 and 1727, the medieval city of Meknes served as Morocco’s capital. While his royal palace was largely destroyed by the 1755 Lisbon earthquake, a nearby magnificent structure now referred to as the Royal Stables has survived to this day, beautifully preserved.

Stories abound about the 12,000 horses the Sultan kept there and how his love for them assured they were well tended to, but in fact the edifice was NEVER A STABLE.* A fanciful tale that has been perpetuated for decades by local guides, in guidebooks, on the web and on maps until today, but the complex was strictly an immense granary, as the translation of Heri es-Souani indicates. Fearing an attack on his capital, Moulay Ismail wanted to ensure there would be enough grain in storage to feed his horses and the city’s population for up to a year-long siege. Thus the granary was constantly repleted by caravans carrying grain from the wheat-growing Tadla plains to the South. 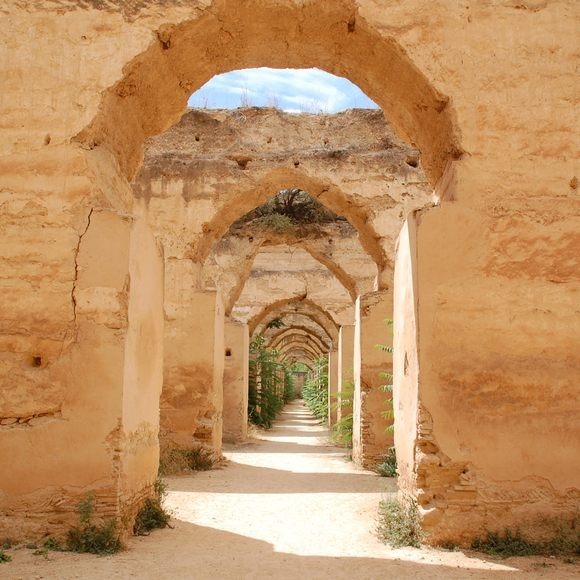 *(Horses throughout history and throughout the world need to be in stalls. The first thing any horse enthusiast notices in the building is that there is no trace of stalls nor any logistical arrangement under the arches where stalls could have been set up. Also, no water troughs, so the other fancy tale that the horses were taken everyday to a water reservoir which is downhill from the building is equally logistically impossible when you’re dealing with thousands of horses, not to mention they need to drink more than once a day!)

The actual stables were roughly 600 meters to the southeast of the granary. The first description we have of them is from 1712 by French cleric Dominique Bousnot, on his third and final mission to the court of Moulay Ismail in order to negotiate the release of French prisoners. He described two long lines of stalls (didn’t mention how many), separated in the middle by a wide water trough for the horses. The only remains of the site is a small mosque, the Jamiaa Roua, which means Mosque of the Stables, and the now dried up trough, covered by cement slabs.

Still, the Royal Granary is an astounding architectural achievement, well worthy of its placement on the World Heritage List, its sheer vastness (of which only 2/3rds remain) overwhelming to the senses. The first 3 halls have been restored to their original grandeur and were used in the filming of “The Black Stallion Returns.” The remainder is in the state that the 1755 earthquake left it, with all roofs caved in, yet you can still see in the walls the windows that provided aeration to the stored grain.

Know Before You Go
Heri es-Souani is open daily 9:00am to noon and 3 to 6:30pm (albeit in periods of shorter daylight the guard generally locks it up as soon as the sun sets). The entry fee is 70 Dirhams, roughly $8, local cash only.