Rock Inscriptions in Greek Discovered on Mountain in Central Asia

The engravings in Greek writing in the Bactrian region of that area reads, “ΕΙΔΙΗΛΟ Υ…ϸΑΟΝΑΝϸΑΕ ΟΟΗ-ΜΟ ΤΑΚ-ΤΟΕ,” which translates to “This is the…of the king of kings, Vima Tactu,” according to Nicholas Sims-Williams, a leading specialist in the study of the Bactrian language. 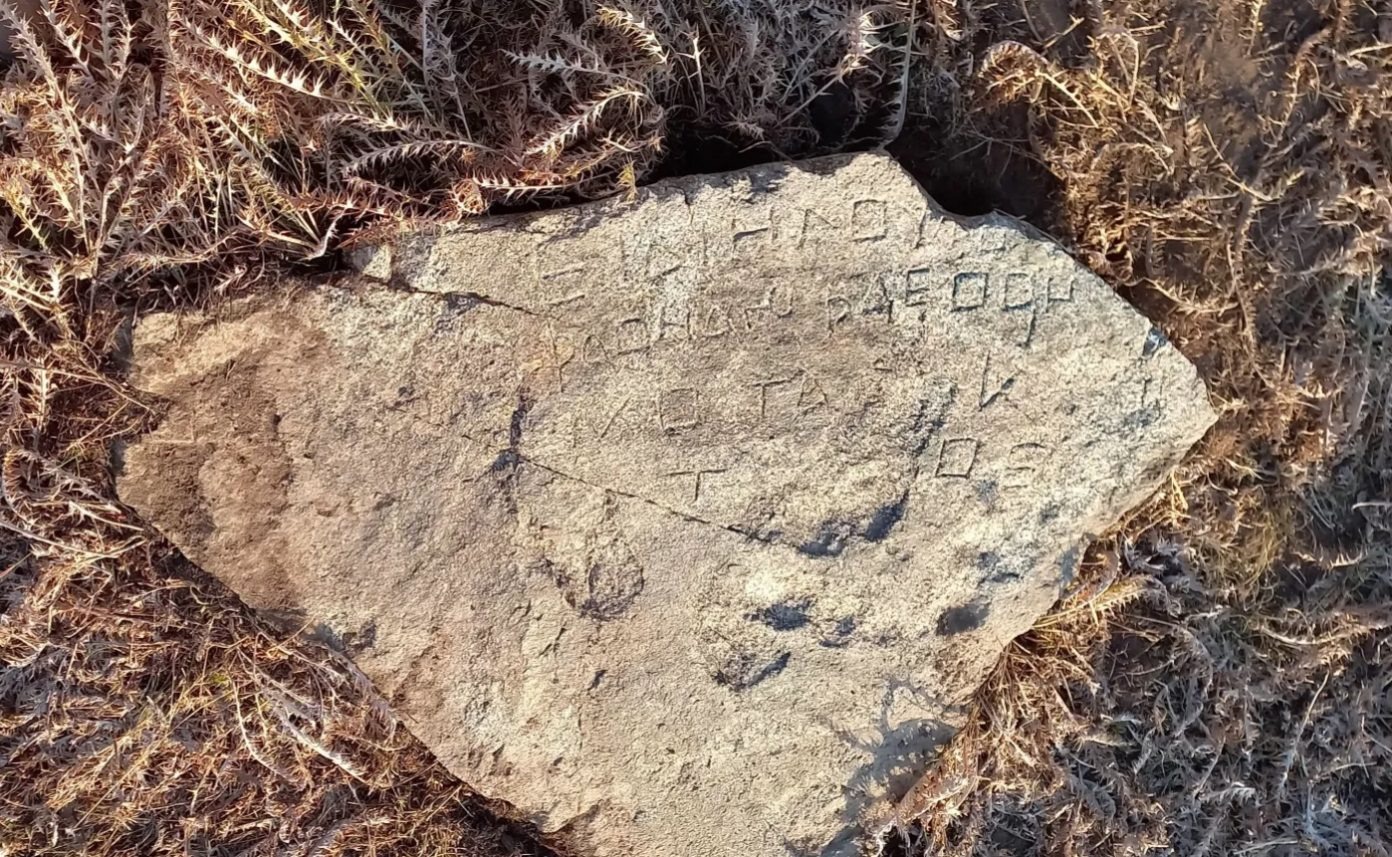 Bactrian and Greek
Bactrian coin Greek alphabet
The Bactrian word Alchono ( Αλχοννο ) written in Greek on a coin. Credit: cng coins / wikimedia commons CC BY-SA 3.0
Bactrian was written predominantly in an alphabet based on the Greek script, known natively as αριαo (Arya). Following Alexander the Great’s conquest of Bactria in 323 BC, Greek was the administrative language of his Hellenistic successors, the Seleucid and Greco-Bactrian kingdoms, for about two centuries.

Later, the Kushan Empire retained Greek for administrative purposes but soon switched to Bactrian. The Bactrian Rabatak inscription (discovered in 1993 and deciphered in 2000) records that the Kushan king Kanishka (c. 127 AD) abandoned Greek (“Ionian”) as the administrative language in favor of Bactrian (“Arya language”).

As a result, the Greek language faded from official use, with only Bactrian remaining. The Greek script, on the other hand, persisted and was used to write Bactrian.

The obstacles of new findings
Archaeologists do not typically have the opportunity to discover new monuments in Tajikistan due to its natural landscapes.

The monuments in hard-to-reach mountainous areas are particularly difficult to identify. Local residents get the job done, however, and report their findings to archaeologists.

For example, in 1932, a local shepherd named Jura Ali discovered a basket filled with documents on Mount Mug. The finding turned out to be unique, as it was the first text in the Sogdian language found in the territory of historical Sogd. That study eventually led to the discovery of the settlement of ancient Penjikent. 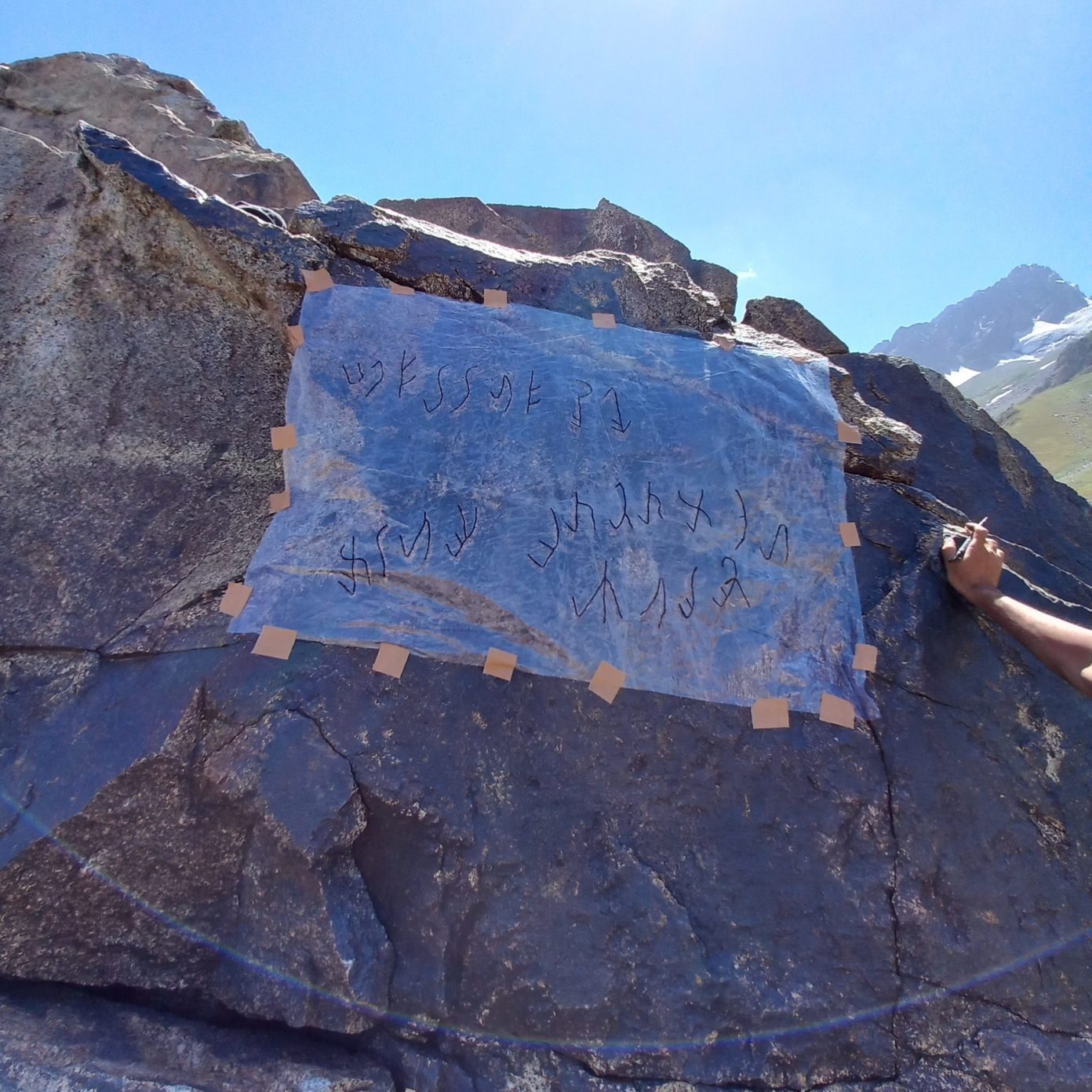 How the discovery came about
Similarly, a resident of the village of Shol in the Hisor Sanginov district came across inscriptions in an unfamiliar letter in the mountains.

Bobomullo Bobomulloev, a researcher at the Institute of History, Archaeology and Ethnography of the National Academy of Sciences of Tajikistan, took over the examination of the discovery.

After closer analysis, the rock inscriptions indeed turned out to be in ancient writing. They were located on the northernmost part of the gorge near the right tributary of the Almosi River in a very picturesque place known among the local population as Khoja Mafraj.

The local shepherd Sanginov Khaitali, who made the find, said that the first time he had visited the area, he had found even more.

Due to avalanches, fragments with inscriptions fell to the foot of the cliff. The part that survived is carved on a flat rock surface in three lines, where there are twenty-three letters.

Bactria, its history, and connection to Greeks
Bactria is an ancient historic region in Central Asia between the Hindu Kush Mountain range and the Oxus River now called the Amu Darya River. The region also goes by the name “Balkh” after one of the tributary rivers of the Amu Darya.

Even though historically it has been a unified region, it is now divided among many Central Asian nations including Turkmenistan, Afghanistan, Uzbekistan, Tajikistan, and Pakistan. Two of its most important cities today are Samarkand in Uzbekistan and Kunduz in northern Afghanistan.

Early Greek accounts of archaeological evidence indicate that the area east of Persia and northwest of India has been home to assembled empires since 2,500 BCE.

In the sixth century BCE, Cyrus the Great conquered Bactria and added it to the Persian Empire. When Darius III fell to Alexander the Great in the Battle of Gaugamela (Arbela) in 331 BCE Bactria was thrown into chaos. Due to strong local resistance, it took the Greek army two years to put down the Bactrian insurgency, but their power was tenuous at best. 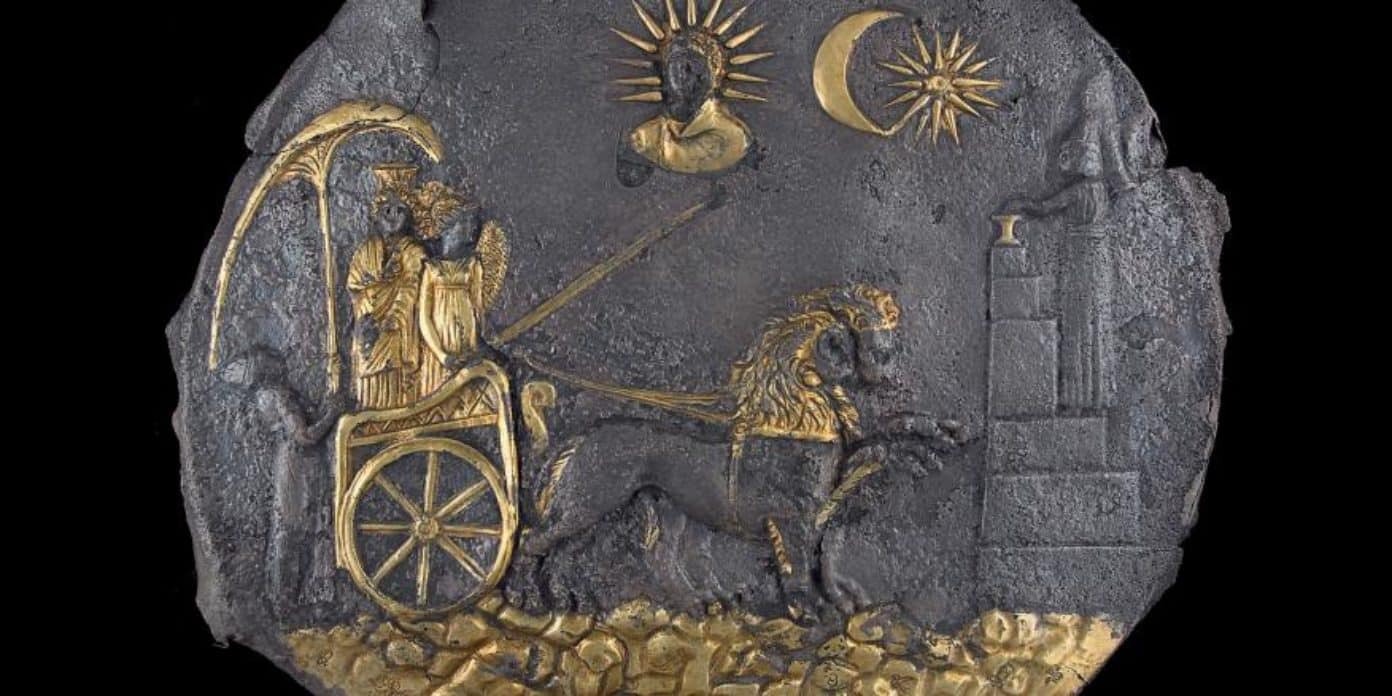 Plaque from Bactria (2nd c. BC) depicting Greek Goddess Cybele in a chariot driven by Nike and drawn by lions toward a votive sacrifice (right); above are heavenly symbols including a solar deity . Credit: Public Domain
The conquests of Alexander the Great in Bactria
Alexander the Great played a major role in bringing Greek people and culture to lands quite distant from the Mediterranean.

The Hellenistic Period of 323 to 331 BCE introduced diversity on a greater level, cultural transformations, and blending brought by the arrival of Greeks into western and central Asia.

On the eastern side is Bactria, an isolated region that hosted the unique Greco-Bactrian Kingdom.

The Greek historian Herodotus wrote that during the Greco-Persian wars (499-449 BCE), after having besieged the Greek colony of Barca in Cyrenaica for nine months, the Persian King Darius reduced the city’s population to slavery and “gave them a town of Bactria to live in.”

Yet it was not until Alexander’s conquest that the Greek presence in the region became more substantial. After his death, it formed the easternmost part of the Seleucid Empire, named after the Greco-Macedonian dynasty which governed much of the Middle East during the Hellenistic period.