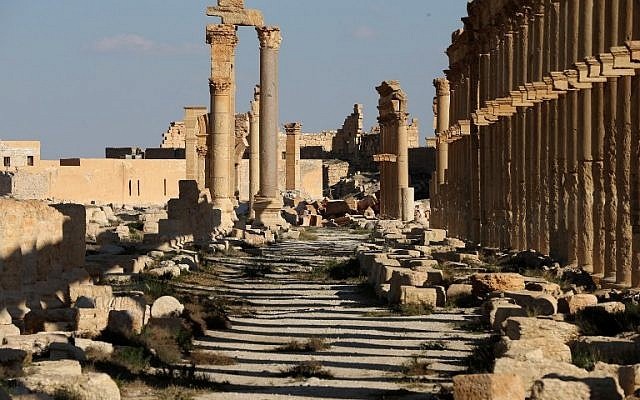 This file photo taken on March 31, 2016 shows the remains of the destroyed Arc du Triomphe in the ancient city of Palmyra in central Syria. (AFP/Joseph Eid)
While the Islamic State carries out its notorious broad-based campaign in Palmyra of vandalism and cultural cleansing, there are another 20,000 archeological sites across the Middle East and North Africa that are also at severe risk.

Last month, an archaeological preservation project launched an online English and Arabic-language database to raise awareness and urge state officials in affected countries to take protective measures. The project, called Endangered Archaeology in the Middle East and North Africa (EAMENA), has developed a spatial database which provides the level of risk the site is facing and its historical background.

Founded in 2015, the project is based at the universities of Oxford, Leicester and Durham, and is supported by charitable fund Arcadia, which since 2002 has awarded 75 grants for a combined $207 million to “preserve endangered culture.”

With the rise of the Islamic State and extremism throughout the region, the need for such cultural preservation is palpable. According to a 2014 report from right-wing think tank the Gatestone Institute, called “The Destruction of the Middle East,” the heritage of centuries has been wiped out in little more than a year.

However, since many of these regions of at-risk ruins are located in war zones, according to a press release, “the project uses satellite imagery to rapidly record and make available information about archaeological sites and landscapes which are under threat.”

According to the EAMENA website, “Whilst not all damage and threats to the archaeology of the MENA region can be prevented, they can be monitored and mitigated.”

Not all threats to the archeology are from armed conflict. There is an entry in the database for the West Bank city of Jericho, which it lists as being located in the “State of Palestine.” A main biblical site, remains of a settlement dating back to 9,000 BCE have been found in archaeological digs.

Unfortunately, today the site is labeled in “poor” condition. As for the “potential impact factors on the resource,” two are listed: development and construction 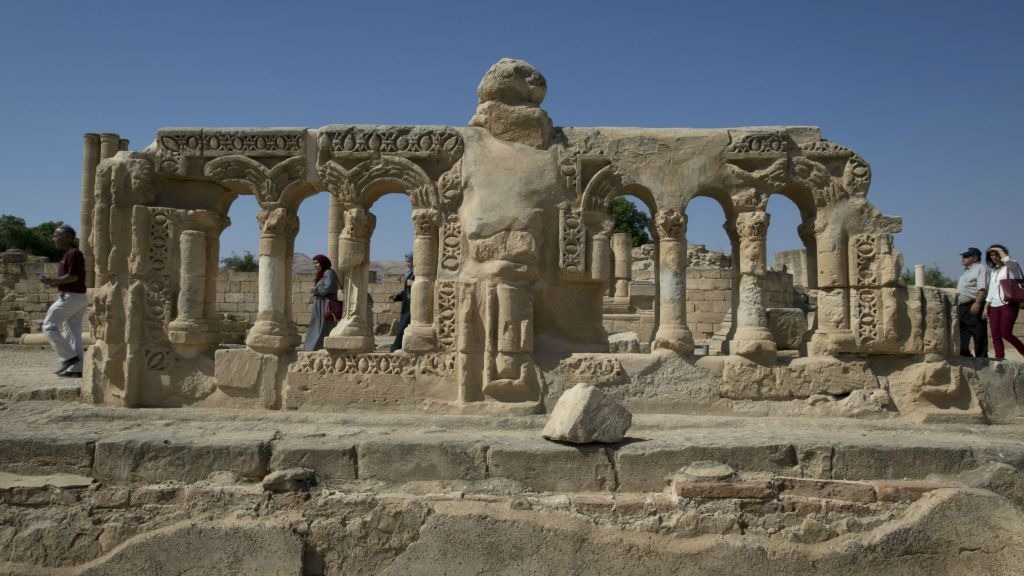 Visitors roam the Islamic archaeological site of Hisham Palace ahead of an opening ceremony, in the West Bank city of Jericho, Thursday, Oct. 20, 2016. (AP Photo/Nasser Nasser)
“The archaeology of the Middle East and North Africa is exceptionally rich and diverse, giving insight into some of the earliest and most significant cultures in human history,” said Oxford University’s Dr. Robert Bewley, director of EAMENA project. “Those seeking to deliberately damage archaeological sites are attacking the cultural heritage of all of us.”

Perhaps with the tools found in this database, the world may be one step closer to an archeological neighborhood watch.