To archaeologists, Luxor is a dream. To tourists, it’s a wonderful place offering the best of glimpses into the ancient Egyptian world one can get. If you want to follow in the footsteps of the Pharaohs, Luxor is a must-see. Whether in real-life or pictures, Luxor brings the days of the Golden Age back to life. 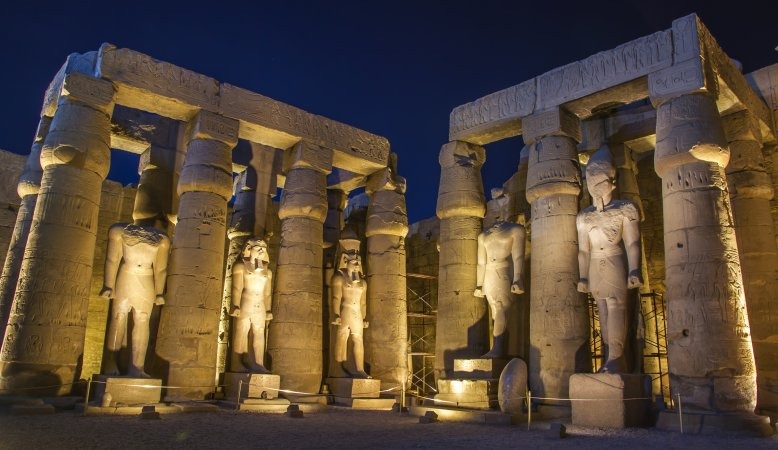 Located in Upper Egypt, on the east bank of the Nile River, Luxor is one of the oldest inhabited cities in the world. Its name has changed, but its brilliance has withstood the test of time. Referred to in the Bible as Thebes, this metropolis was known to ancient Greeks under the same name.

In Arabic, the name Luxor means “The Palaces” and in ancient times the place was known as “The city of Hundred Doors“.

Thebes is mentioned five times in the Bible, and the Holy Book reveals this great capital of Upper Egypt during the New Kingdom was considered a hostile place to the Israelites.

“The Lord of Hosts, the God of Israel, says: “I am about to punish Amon, god of Thebes, along with Pharaoh, Egypt, her gods, and her kings—Pharaoh and those trusting in him.” (Jer 46:25)

The splendid city of Amun, a god who was a member of Ogdoad of Hermopolis was once a cult center. “The Hermopolitan concept of the Ogdoad pantheon was widely acknowledged throughout Egypt, and Medinet Habu located in western Thebes was regarded as the mortuary cult-place of the “deceased” Ogdoad’s eight primordial deities.” 1

During the Hyksos invasion, Thebes was attacked, and it took many years before the Egyptian civilization regained control over large parts of their kingdom.

With the rule of Ahmose I, the pharaoh who expelled the Hyksos invaders, Amun acquired national importance, expressed in his fusion with the Sun god, Ra, as Amun-Ra or Amun-Re. Thebes became the city of god Amun-Ra.

Gigantic Karnak Complex Built With Advanced Ancient Technology
God Amun-Ra was worshipped in his temple in the Karnak Temples Complex. “Karnak represents one of the greatest temple complexes in the world. It is the result of combined architectural achievements of several generations of skilled ancient builders of Pharaonic Egypt.” 2 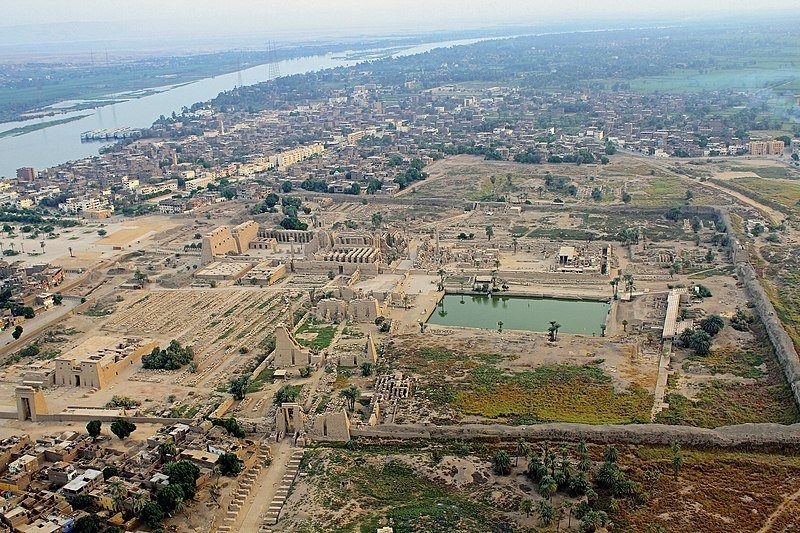 To the north is the smallest precinct of Montu, the falcon-headed god of war, “Lord of Thebes”. Karnak, with a spectacular collection of obelisks, stone statues, gigantic walls, and walls, offers much to see.” 2

Many aspects of the huge Karnak Temple complex are still shrouded in mystery and it seems this place has still not revealed all its secrets. It is assumed most of the original temple complex is still hidden under the city of Luxor and is inaccessible by archaeologists. It’s also unknown what advanced ancient technology its builders relied on to raise these giant statues and columns.

It Took Hundreds Of Years To Build The Luxor Temple
The incredible Luxor Temple, one of the most visited landmarks in Egypt was constructed over hundreds of years.

“Despite the presence of elements from Middle Kingdom buildings reused in its construction, the Luxor Temple can be traced back no earlier than the eighteenth dynasty. Perhaps the earliest reference to it in ancient records comes from the twenty-second year of the reign of Ahmose (c. 1548 BCE), on a pair of stelae left at Maasara quarry, in the hills of Memphis; this text records the extraction of limestone for a number of temples, including “the mansion of Amun in the Sou[thern] Sanctuary.” 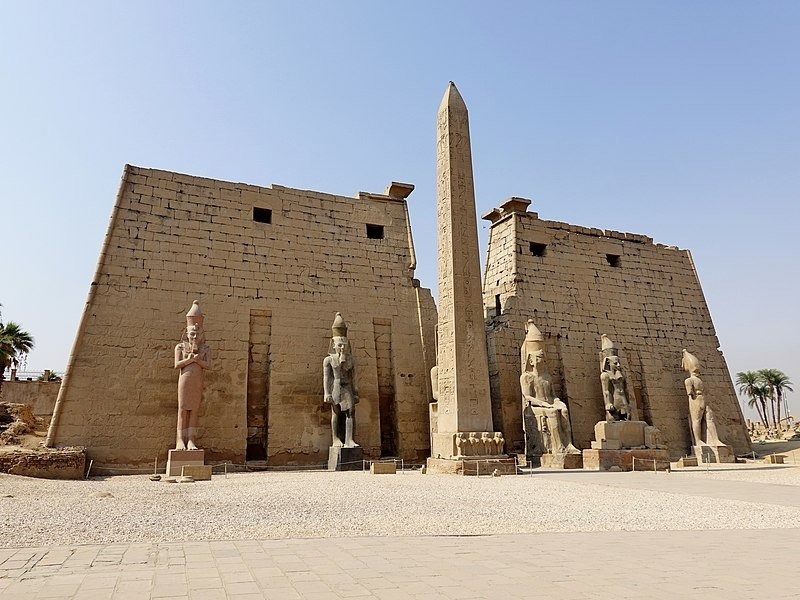 When that building was constructed and what it looked like, are both unknown, for structural evidence appears a Luxor only during the joint reign of Hatshepsut (c. 1502-1482) and Thutmose III: these elements are built into the triple shrine erected by Ramesses II (c. 12034-1237) inside his first court, which reuses elements from an original chapel dedicated by these mid-eighteenth dynasty rulers. This small building had apparently been the last of six “rest stops” built along the road that brought Amun and his circle gods from Karnak to Luxor every year during the Opet festival.” 3

The Valley Of The Kings And Temple Of Hatshepsut
The Valley of the Kings is an ancient necropolis used for burials from approximately 1539 B.C. to 1075 B.C. When archaeologists started to excavate in the Valley of the Kings many tombs were already looted, but astonishing finds have been made, nevertheless. It was here Howard Carter discovered King Tut’s tomb on November 4, 1922. The tomb was intact and packed with antiquities including Tut’s world-famous golden mask. 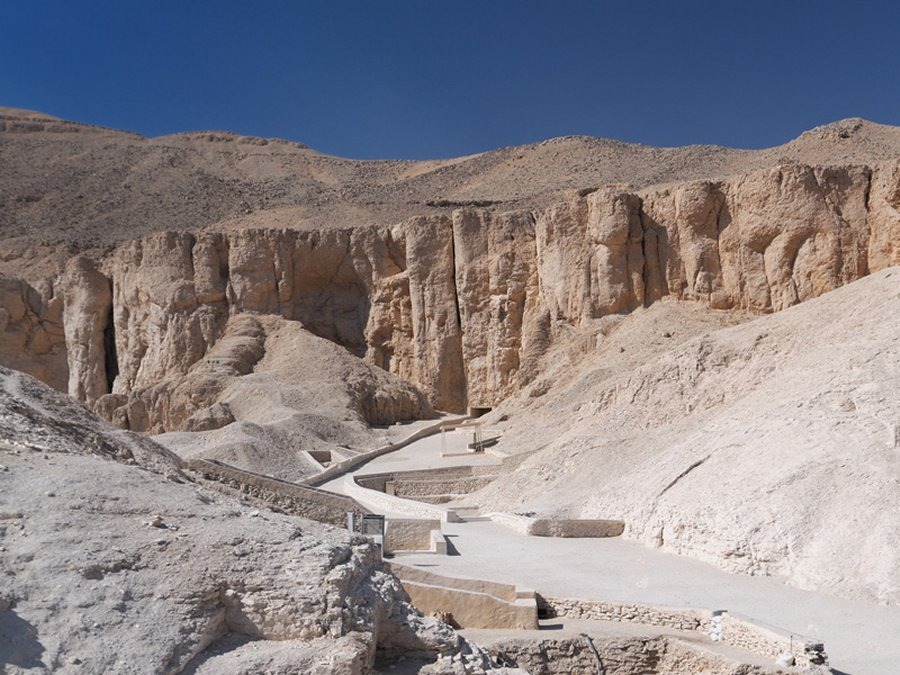 Several tombs – hidden in rocky caves – were built and the Valley of the Kings became a royal necropolis for the greatest personalities of ancient Egypt, such as Tutankhamun, Seti I, and Ramses II, and many others. Credit: Egypt Tourism

When examining the rock-cut tombs and chambers in the Valley of the Kings, archaeologists discovered richly decorated paintings and murals depicting beautiful scenes of ancient Egyptian mythology, as well as images from daily life that provide clues about ancient Egyptian history, culture, and religious beliefs.

Luxor is also famous for the beautiful temple of Hatshepsut. Pharaoh Hatshepsut was a skillful and efficient female ruler who brought prosperity to ancient Egypt. She ascended the throne between 1512 B.C and 1479 B.C.

“She was crowned king, claimed a divine right to rule based on the authority of the god Amun and began to dress as a male pharaoh, and even wore the pharaoh’s “beard’ that was part of their sign of power.” 4

Sited next to the Mortuary Temple of Mentuhotep II, the Hatshepsut temple in Luxor is an archaeological wonder. The construction of the temple started in 1479 B.C and it took 15 years to complete the work. The temple has three levels and the building was deliberately built to tell the story of her life. 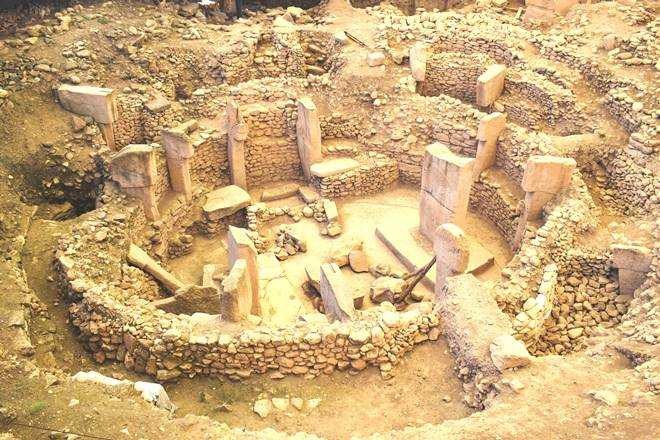 On the temple, walls are scenes depicting Pharaoh Hatshepsut’s journey to the mysterious Land of Punt. Her temple is also “home of two statues of Osiris, sphinx avenue and colonnades with Square Pillars. It holds the shrine of Hathor that has a hypostyle hall with twelve beautiful columns and the chapel of Anubis that has a hypostyle hall with fluted columns, there is also a sanctuary of Amun.” 5

The temple was designed to immortalize Pharaoh Hatshepsut’s name and she succeeded.

A place like Luxor is bound to become a target for treasure hunters, and looters. We can only guess how many magnificent ancient artifacts have been stolen from this place, but fortunately for us, Luxor has not revealed all of its secrets. Luxor is an ever-lasting legacy of the ancient Egyptian civilization and the Pharaohs, and archaeologists are still making fascinating discoveries here every year.