The elaborate mosaic is the largest discovered in London in half a century. 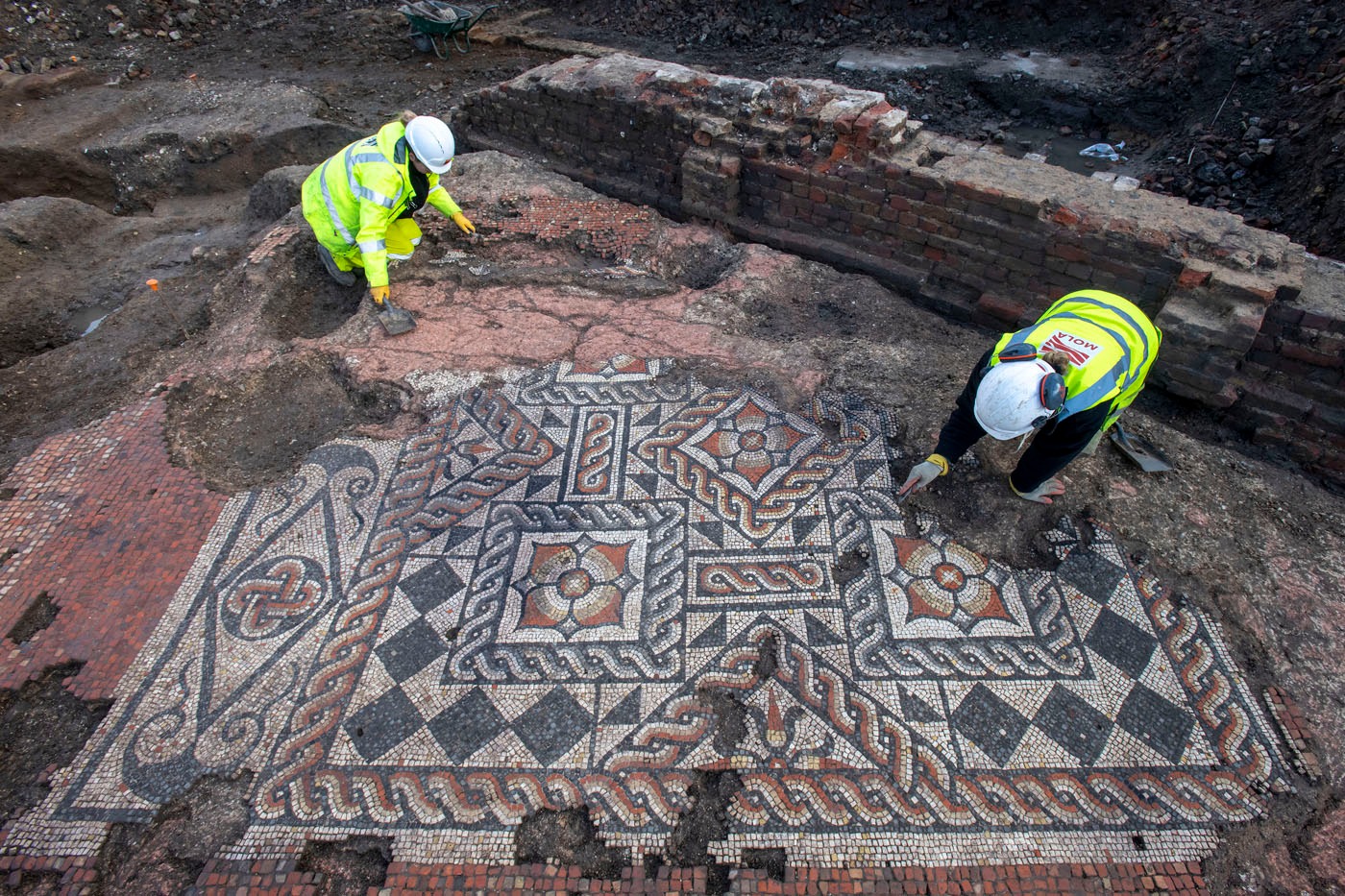 MOLA archaeologists at work on the mosaic unearthed in Southwark (all images ©MOLA and Andy Chopping; courtesy MOLA)
We all muddle through life with the dim awareness that our daily goings and doings are preceded by thousands of years of human activity, but it is only rarely that we encounter tangible evidence of this ancient history. This week, in what is being hailed as “a once-in-a-lifetime find,” a nearly complete Roman floor mosaic was discovered during a planning excavation for the construction of the Liberty of Southwark — a forthcoming mixed-use residential and cultural district in the oldest area of London.

Unearthed by archaeologists from the Museum of London Archaeology (MOLA), the well-preserved mosaic is the largest to be found in London in half a century. As a detailed timeline shows, the site has been subject to British rule and development since 1107 CE, but it was previously an outpost at the fringes of the Roman Empire. The mosaics are thought to be part of residences built between 72 and 160 CE as part of the Roman city of Londinium, founded around 50 CE following the Roman invasion of Britain led by Emperor Claudius. 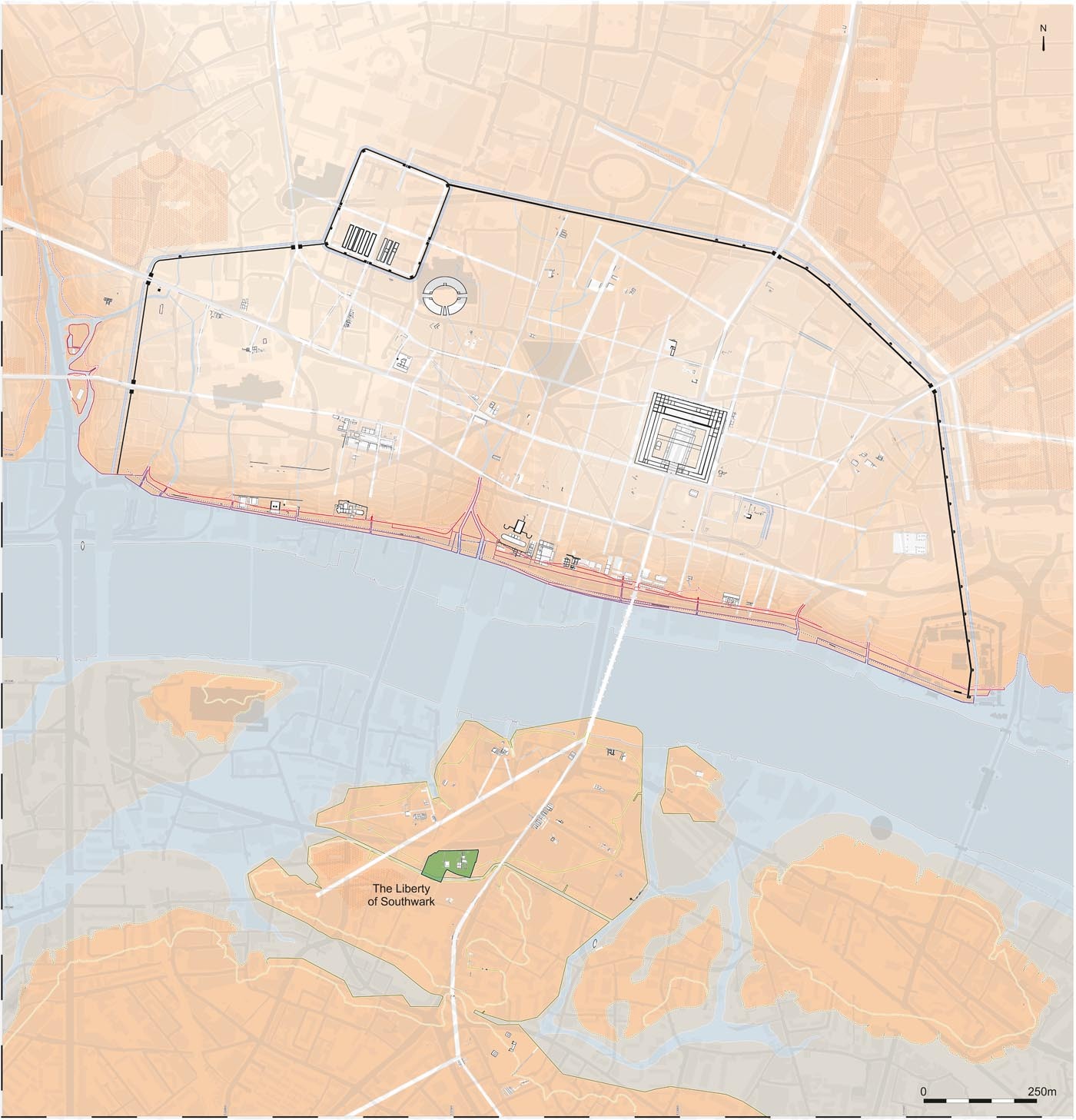 Location of the Liberty of Southwark site in Roman London (detail) (© MOLA; reproduced with permission from Ordnance Survey)
Henrietta Nowne, senior development Manager at U+I, a real estate development firm working to build the site in cooperation with Transport for London (TfL), said that “the Liberty of Southwark site has a rich history, but we never expected a find on this scale or significance.”

“We are committed to celebrating the heritage of all of our regeneration sites, so it’s brilliant that we’ve been able to unearth a beautiful and culturally-important specimen in central London that will be now preserved so that it can be enjoyed by generations to come,” Nowne added in MOLA’s press release.

The mosaics are decorative panels comprised of thousands of small colored and black and white tiles set into a floor of larger red pieces. The largest panel includes flowers framed by geometric guilloché banding, a decorative motif that employs complex, intertwining lines. Lotus flowers, embellished half-moon shapes, and a pattern known as “Solomon’s knot” are all features of the floor mosaics. According to a press release from MOLA, Dr. David Neal, a former archaeologist and an expert in Roman mosaic, has attributed the design to a local enclave of mosaicists who worked in London known as the ‘Acanthus group.’

The smaller panel features flowers and geometric forms that strongly resemble a mosaic uncovered in Trier, Germany, and supports the idea that high-demand mosaic artists of the time likely traveled around the known world plying their trade. 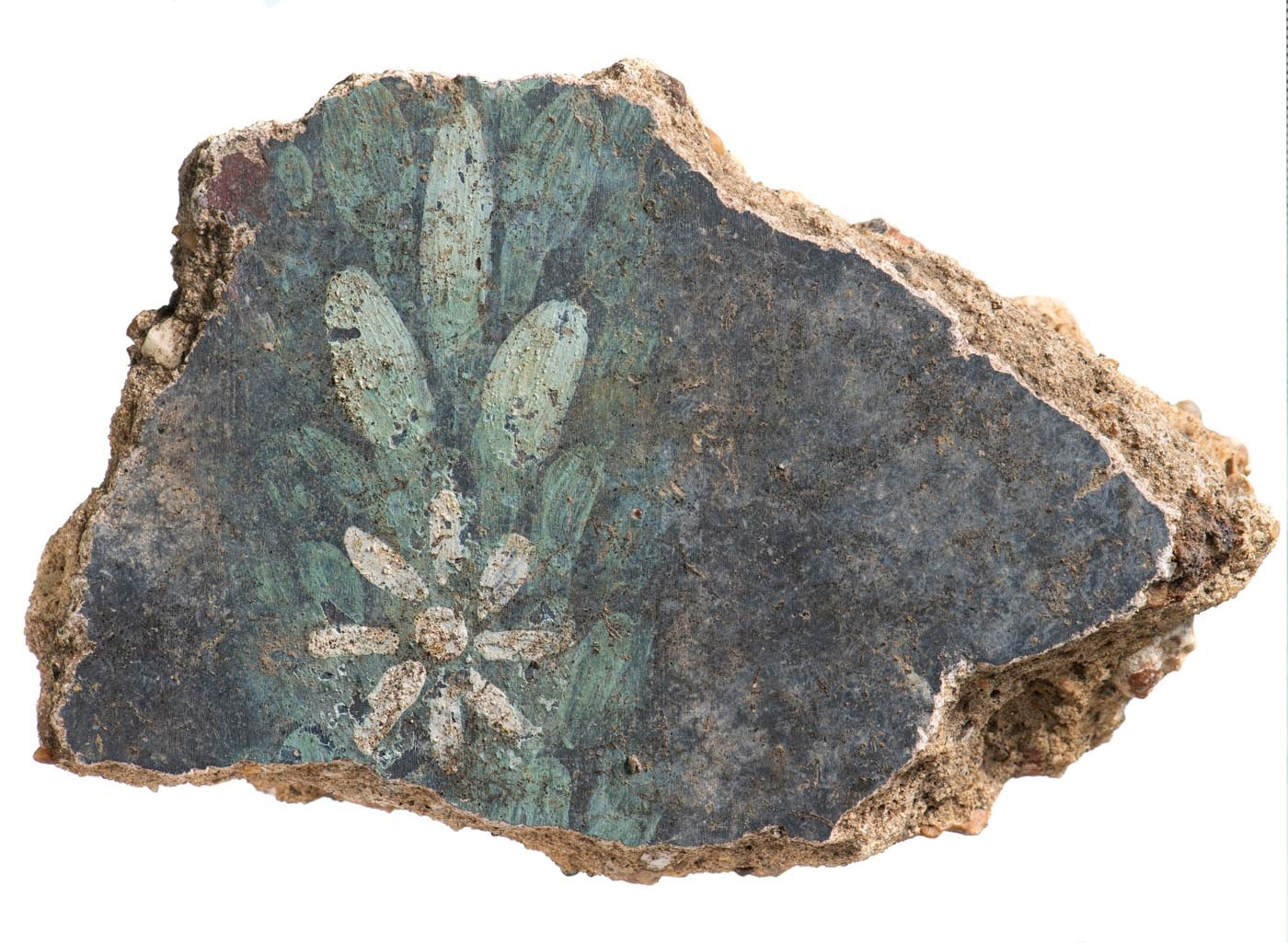 A bit of decorative wall plaster also found at the site during excavations.
“It has been a privilege to work on such a large site where the Roman archaeology is largely undisturbed by later activity,” said Antonietta Lerz, who is supervising the site for MOLA, in the statement. “When the first flashes of colour started to emerge through the soil everyone on site was very excited!”

A digital reconstruction of the mosaics in their original context places them in a dining room, or triclinium, of what is believed to be a Roman mansio — a kind of fancy “motel” that accommodated state couriers and officials traveling to and from London. The space would have contained dining couches, which would afford guests a view of the mosaics while dining. Researchers have dated the largest mosaic panel to the late second to early third century CE, but the room was likely in use through the fourth century, until the discontinuation of Roman rule in 410 CE. Traces of an earlier mosaic have been detected underneath the one currently visible, showing that ancient history has its own predecessors. 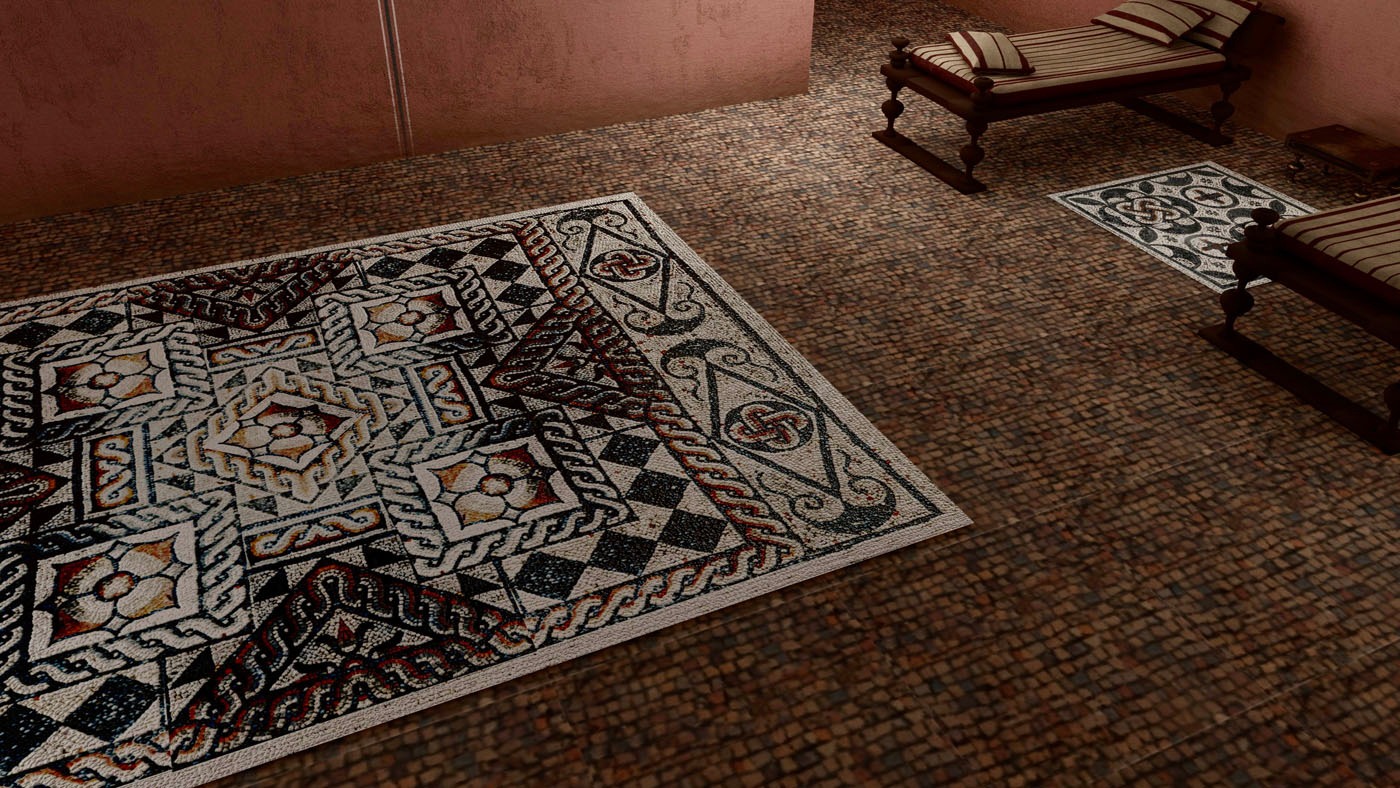 3D reconstruction of the room with the discovered mosaic (artist’s impression). 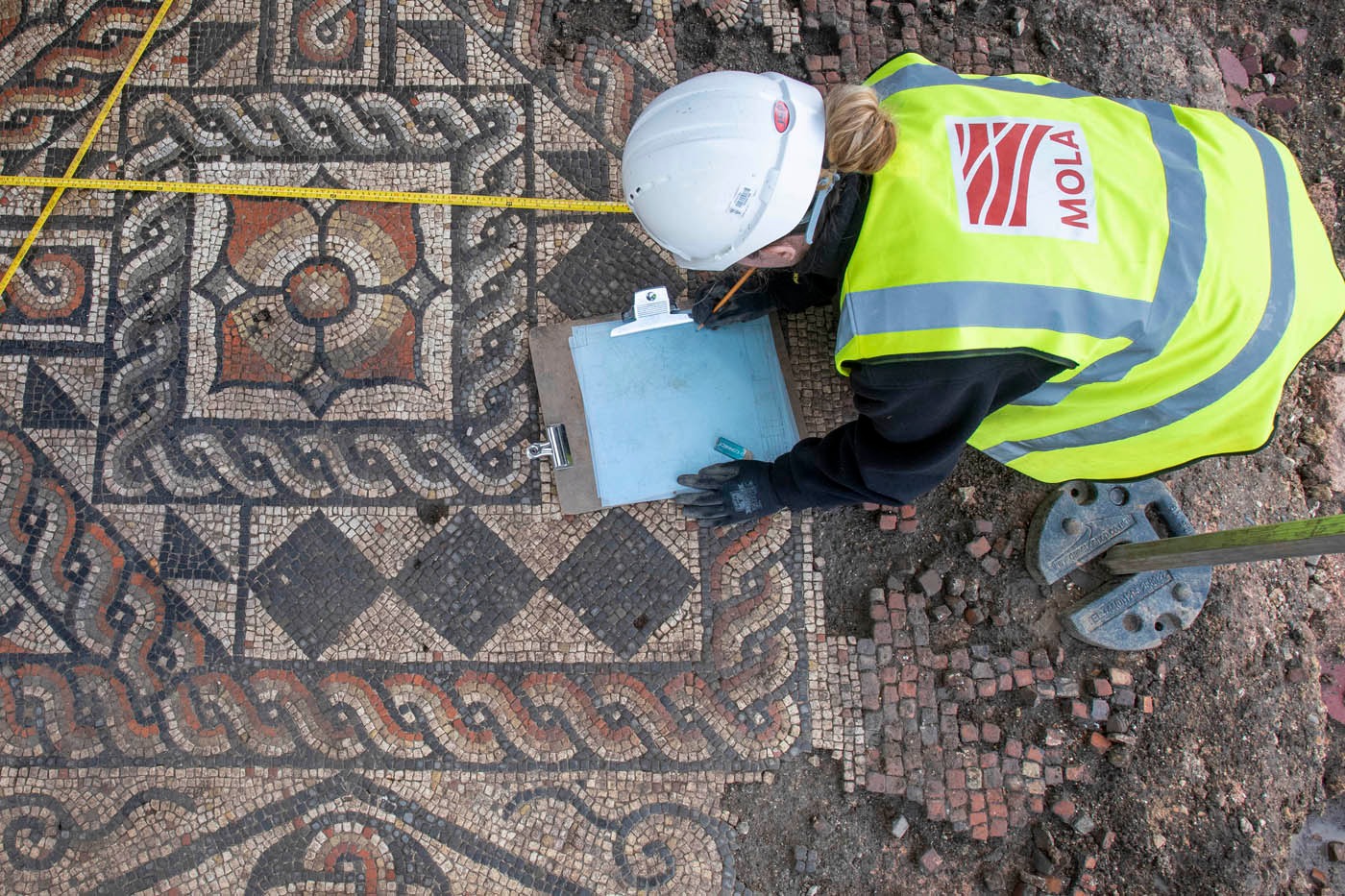 MOLA archaeologist at work on the mosaic unearthed in Southwark.