Archaeologists unveil 1,700-year-old floor, which paved the courtyard of an affluent family’s villa 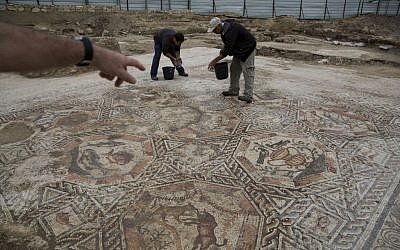 A partial view of a 1,700-year-old Roman-era mosaic floor in Lod, Israel, Nov. 16, 2015. (AP Photo/Ariel Schalit)
LOD — Israel’s antiquities authority on Monday unveiled a 1,700-year-old mosaic floor in the center of the country that archaeologists found last year while building a visitors’ center meant to display another mosaic, discovered two decades earlier at the same location.

The authority said the newly discovered Roman-era mosaic measures 11 meters by 13 meters (36 feet by 42 feet) and paved the courtyard of a villa in an affluent neighborhood that stood during the Roman and Byzantine eras. The scenes include hunting animals, fish, vases and birds. 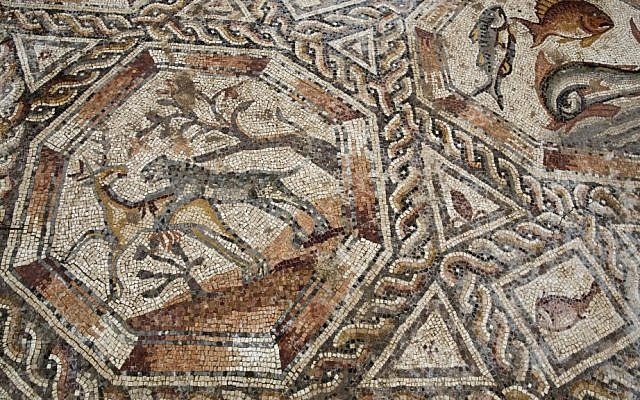 “The quality of the images portrayed in the mosaic indicates a highly developed artistic ability,” said Amir Gorzalczany, who directed the excavation.

The new mosaic was found just a few meters (yards) from the first one, in what is today the city of Lod.

The authority said the mosaic discovered in the 1990s covered the villa’s living room while the newly discovered one was in its courtyard.

The original mosaic has been displayed at the Metropolitan Museum in New York, the Louvre in Paris, and the Hermitage museum in St. Petersburg. It is currently on display at the Cini Gallery in Venice, and is expected to return to Lod after the visitors’ center is complete.