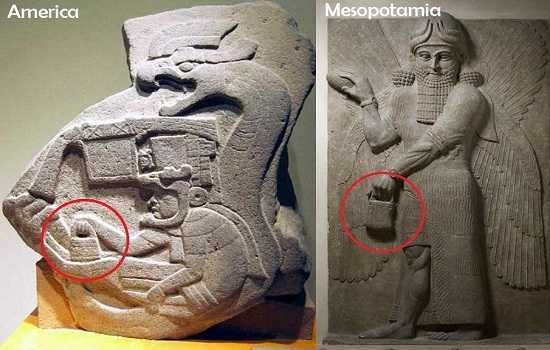 Graham Hancock draws attention to the resemblance between the “handbag” motifs seen in the Göbekli Tepe pillars, stone reliefs created by the Assyrians of ancient Iraq, and the Olmecs of ancient Mesoamerica, in “Magicians of the Gods.” Different cultures utilized the same symbol—a bag or a bucket—at various points in time and in various parts of the world. This is quite strange.

One of the most intriguing and perplexing mysteries may be linked to Ancient Mesopotamia, sometimes known as the Cradle of Civilization, where an enigmatic motif has led many writers to doubt the accuracy of history as we have been taught.

The Ancient Sumerians painted strange objects on their images of the Anunnaki. The “hand watch” that appears in almost all representations of the ancient Sumerian deities and the enigmatic “bag” that the Gods carried were two of the most intriguing artifacts. Curiously, the ancient Maya, Aztecs, and other ancient civilizations used the same design when representing their deities. Additionally, similar to the mysterious bags in prehistoric Mesopotamia and the Americas, the gods in ancient Egypt carried the Ankh sign around with them.

Why did ancient American, Egyptian, and Mesopotamian civilizations picture their gods holding an enigmatic thing in their hands? Is it possible that all ancient cultures in America, Egypt, and Mesopotamia were visited by the same ‘Gods’?

Contrary to various attributes that clearly distinguish the Ancient Anunnaki from regular people, the Ancient Anunnaki Gods were almost always shown as humanoids, with their facial features always being well-masked by their thick beards. Ancient Egyptians and several cultures in the Americas did the same thing as the Sumerians in depicting their gods in humanoid forms.

Left: 1200–400 BC: Olmec Monument 19, from La Venta, Tabasco (earliest depiction of central American deity known by Maya people as Kukulkan and by Aztec people as Quetzalcoatl); Right: This image shows a possible representation of Marduk who is possibly an embodiment of Enlil in Babylonian myths.
Quetzalcoatl, an ancient Mesoamerican deity, is oddly shown on a stone stele at the La Venta archaeological site holding the same “Bag” that we see in ancient Sumerian representations. But this isn’t the only site in Mexico where the curious representation was found.

The intriguing image, though, was discovered in Mexico at other locations as well. Between Teotihuacan’s fall and Tenochtitlan’s emergence, Tula, a significant regional hub, rose to prominence as the Toltec Empire’s capital. One of its enormous “Atlantean” statues is once more seen clutching an enigmatic purse.

Göbekli Tepe is one of the oldest ancient megalithic temples on Earth. There are complex, enormous stone pillars grouped in a series of rings that stand tall and proudly narrate a millennia-old tale of the time when various civilizations ruled the earth. Despite new evidence to the contrary, it was once thought that the enormous stones were engraved by Neolithic hunter-gatherers around 12,000 years ago. 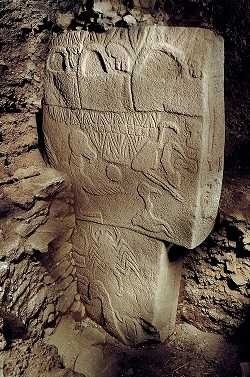 Pillar 43, Enclosure D, also known as the Vulture Stone of Göbekli Tepe. Credit: Martin B. Sweatman and Dimitrios Tsikritsis
The enigmatic temple, which consists of three enormous stone circles, was hidden for an unidentified reason in the distant past. Archaeologists have been excavating the ancient site for 13 years, yet not a single stone-cutting tool has been found. No one can explain how prehistoric humans, who were thought to be incapable of such feasts, managed to construct some of the most amazing stone structures on the world.

Does the existence of the enigmatic bag that the gods carried suggest a secret connection between these two cultures? Why were Gods depicted in ancient cultures as having a strange handbag? What did it contain?

Most importantly, how is it even conceivable that the enigmatic handbag may be found in several cultures around the world that conventional experts claim were never connected? What if the Gods who visited the ancient Maya, Aztec, Toltec, and Olmec civilizations were actually the same as the Ancient Anunnaki, as represented by the Ancient Sumerians?

Ancient Origins explains, “In ancient cultures from Africa to India to China, the figure of a circle was associated symbolically with concepts of spirituality or non-materiality, while that of a square was often associated with concepts of the Earth and of materiality.” And so, “the image is used to symbolize the (re)unification of the earth and sky, of the material and the non-material elements of existence.” Medium, on the other hand, quotes non-mainstream historian Graham Hancock asking, “Could these containers (whether they are bags or buckets) be the symbols of office of an initiatic brotherhood — far traveled and deeply ancient, with roots reaching back into the remotest prehistory?”

Has the Mystery Of Handbags Solved?
Archaeologist and Egyptologist Andrea Sinclair might have an explanation for some handbags depiction in the ancient gods’ statues. She says “the answer is ‘completely different objects.’” She has done her MA in Late Bronze Age eastern Mediterranean/Near Eastern archaeology, and a Ph.D. in Egyptology specializing in iconography and cultural interconnections. (Source)

According to her, this Neo-Assyrian (1st millennium, 9th century BC) relief from Iraq has a winged protective Apkallu divinity who is holding a ritual bucket filled with a libation liquid. The image is a two-dimensional interpretation of a circular bucket with a handle that is viewed in profile. The pine cone he holds is dipped into it so that he can sprinkle the liquid. 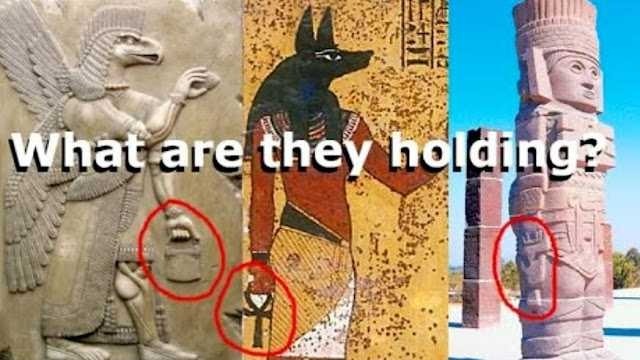 The jackal-headed figure is the Egyptian god of mummification Anubis from a wall in the burial chamber of Tutankhamun’s tomb (2nd mill., 14th century BC). He is holding an amulet, the symbol of life, the ankh, that is really not in any known universe a bucket or a handbag. Egyptian gods carried life in their hands and conferred it on kings, particularly the dead ones.

The Meso-American Toltec warrior (10th to 12th century AD), is from the pyramid of the Toltec creator and chief god Quetzacoatl at Tula in Mexico. The figure holds something specific to his warrior status and his culture that resembles neither of the other objects. It is a weapon.