One of the most impressive finds was a mosaic floor, dating back second half of the 1st century B.C., discovered in the ruins of what’s thought to be a Roman public building. (Image credit: Bertrand Houix, INRAP)

Hidden for centuries, mosaic floors from the lost Roman city of Ucetia have been uncovered in France. 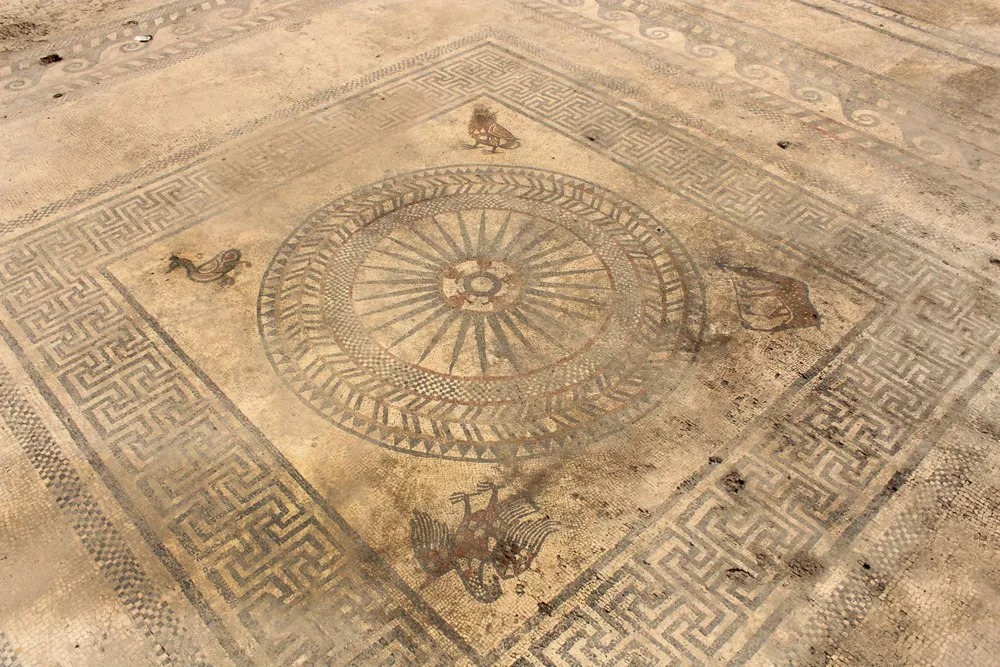 A large excavation is underway in the town of Uzès in southern France to unearth more of the remains of this ancient Roman settlement, the existence of which archaeologists had only hints of until the dig.

The nearby city of Nîmes is more famous for its Roman history, largely thanks to the A.D. 70 amphitheater, where events, including bullfights, still take place. Less is known about Uzès, once called Ucetia. But before the construction of dormitories for a high school there, archaeologists were brought in to investigate a 43,000 square-foot (4,000 square meters) area for pieces of the city’s history. [See Images of the Lost Roman Mosaics of Ucetia]

The French National Institute for Preventive Archaeological Research (INRAP) announced that the dig has so far been very fruitful. Some of the walls and structures that were uncovered date to just before the Roman conquest of present-day France (called Gaul at the time). But the most visually stunning finds are the well-preserved Roman-era mosaic floors with richly colored patterns and figures.

The archaeologists found one large structure, 2,700 square feet (250 square meters) in area, with a colonnade that suggests it was a public building, and four rooms in a row.

One of those large rooms contains a complex mosaic pavement with geometric patterns like meanders and swastikas, as well as symbols like crowns and chevrons, and animals like an owl, duck, eagle and fawn. The archaeologists think this building dates to the first century B.C. and was maintained until the first century A.D.

In another area at the site, the archaeologists unearthed a”domus,” or a large house belonging to a wealthy Roman family. This building sprawls over 5,380 square feet (500 square meters) and dates to the early Roman Empire (first century B.C.).

A room in this family home has a mosaic floor with a geometric pattern, accompanied by stylized dolphins in the four corners. The home also had a type of central heating system; archaeologists found a “hypocaust,” or a crawl space supported by brick columns where hot air would have circulated. And several “dolia,” or huge ceramic wine vessels, were found there, suggesting the inhabitants might have drunk homemade wine.

The 1.5 million euro ($1.6 million) dig is ongoing, and, according to INRAP, the archaeologists have recently begun excavating another large area of ancient and medieval ruins, including two roads and an intersection.