Egyptian medicine – Science and superstition in the Ancient World

To early Orientalists, they were exotic people who used arcane ritual and repulsive medicines; but in Antiquity, Egyptian doctors were regarded as the epitome of medical excellence. Prof. Rosalie David tells CWA how recent investigations are revealing their exceptional pioneering practices.

While Greek physicians like Hippocrates and Galen are often regarded as the forefathers of modern scientific medicine, to the Ancient Greeks themselves that accolade went to Egypt. Indeed, as early as the 7th or 8th century BC, Homer’s epic, the Odyssey, stated: ‘In Egypt, men are more skilled in medicine than any of humankind’.

Traditionally, the first port of call  in assessing Egyptian therapeutic  practices has been the ‘medical papyri’, 12 manuscripts dating from about 1820 BC to AD 250 – though some may be copies of still earlier works. These texts reveal a complex and sophisticated approach to treating the sick, where the ritual practices and spells that you might expect from 3,500-year-old remedies are combined with a strikingly modern approach towards diagnosis.

These two branches of thought are called ‘rational’ (that is, more conventionally scientific) and ‘irrational’ (magical) by modern Egyptologists. But this separation of science and superstition would have been alien to Ancient Egyptians. While the amount of magic prescribed by each papyrus varies greatly, it is clear that its practitioners viewed the two types of treatment as complementary. ‘Magic is effective together with medicine; medicine is effective together with magic’, the Ebers papyrus scribe wrote in c.1550 BC.

The manuscript with the least magic of the 12 is the Edwin Smith papyrus, comprising around 500 lines probably written by a single individual in c.1500 BC. Its contents are a series of medical case studies, neatly organised under subheadings that relate to the part of the body they discuss. These provide instructions on how to examine the patient, as well as advice on diagnosis, likely prognosis, and what treatment should be given.

Yet even this manuscript contains a small amount of magic – incantations against ‘disease-causing agents’ listed on the reverse – giving us a rare insight into how the ancient Egyptians understood the transmission of illness. They had no knowledge of microbes (no-one did before the 17th century AD). Instead, these spells describe a ‘pestilent wind’, ‘the pest embedding in household goods’, and advice on how to treat someone who has swallowed a fly. While it would be rash to interpret such rationale as evidence of a modern understanding of sanitation or insect-borne disease, it does suggest that the Ancient Egyptians recognised that illness had its roots in the physical world.

Moreover, while early Egyptian pharmacy is often stereotyped as using unpalatable concoctions of ingredients such as animal fat and crocodile dung, recent studies of the medical papyri – which between them list recipes for around 2,000 remedies – indicate that some prescriptions may have had real therapeutic benefits. While translating the ingredients is not always straightforward, as many of their names do not occur in other documents, some 50% of their drug sources are thought to still be in use today, with ingredients listed in the Ebers papyrus including opium, henna, garlic, coriander, and juniper. 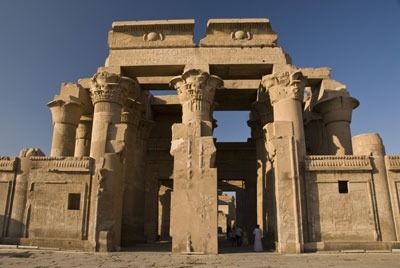 Where magic is prescribed as a treatment, it typically involves three elements. Spells were recited, after which there was a laying on of hands – either directly on the afflicted person, or on a model representing them if treatment was being performed at a distance – during which the patient was anointed with wine, water, and oil. Amulets, often shaped like parts of the body to help focus the spell, were also used to attract helpful spirits who could assist the cure.

While medicine in Egypt seems to have been a mostly male domain, occasional references to women do survive: a 4th-Dynasty (c.2613-2494 BC) stele at Giza mentions Peseshet, a female name, who was imy-r swnwt, ‘Overseer of Female Physicians’.

Temple and other inscriptions record at least three categories of medical practitioners with whom patients could consult. At the top were the priests of Sekhmet, a lioness-headed deity associated with war and disease. These were the consultants of their day, who worked in temples, healing the sick, compiling medical texts, and perhaps teaching medical skills. There were also swnw – trained doctors who were not priests – and magicians.

Much of this treatment, particularly for the very sick, would probably have taken place in patients’ homes, but temples also offered medical aid. Several inscriptions refer to a building in religious complexes called the ‘House of Life’, where it is thought that treatment may have been given. Temple-based medicine may also have taken place on outdoor terraces, perhaps involving a form of dream therapy. On the terrace at the Temple of Hatshepsut at Deir el-Bahari, we find graffiti left behind by grateful patients, some of whom travelled long distances in search of a cure. One was Andromachus, a Macedonian ‘worker for hire’, who writes that he ‘came to the good god Amenothes; he was sick and the god healed him on that very day.’ These Late Period inscriptions also give thanks to the Greek deities Hygeia and Asklepios.