A fabulous new find where history meets luxury in Antakya
When hotel construction work unearthed extraordinary mosaics, the owners decided to create a new archaeological park. It showcases what is believed to be the largest known surviving Roman mosaic, as well as some stunning mythological scenes. Anthony Beeson puts us in the picture. 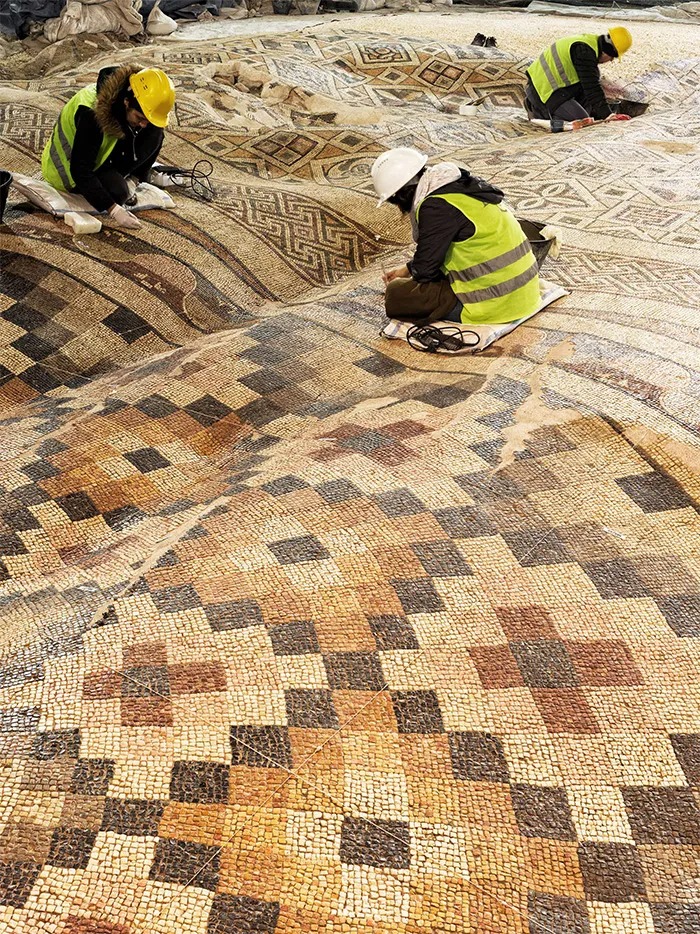 Conservators working on the rippled mosaic
Excavations at a new hotel development in Antakya have revealed some stunning mosaics, including the vast great mosaic. Here, conservators are working on an area of the pavement where earthquake damage has left it looking distinctly rippled. [Image: courtesy of the Museum Hotel Antakya]
Antakya, anciently Antiochia on the Orontes, is a Turkish city renowned for its superb collection of Roman mosaics and a stunning museum. It can now add a truly remarkable geometric mosaic, lauded as being the largest surviving example in the world, to its public attractions. Antiochia was founded in 300 BC by one of Alexander the Great’s generals, Seleucus I Nicator, and became the capital of the so-called Seleucid Empire. It was then taken over by Rome, at its own request, in 64 BC and became the seat of the governor. ‘Golden Antiochia’ was a favourite with the emperors, who beautified it in an attempt to make it an eastern Rome.

Now a new attraction has opened to the public, displayed beneath a futuristic hotel. It takes the form of a unique archaeological park, the Necmi Asfuroğlu Archaeology Museum, which is home to the impressively sized great mosaic. This 1,050m² 4th-century pavement was discovered in 2009, when the Asfuroğlu family began constructing what was supposed to be a new luxury hotel on a site 2km from the centre of the modern city. However, it soon became apparent that the proposed location was full of incredible archaeology. 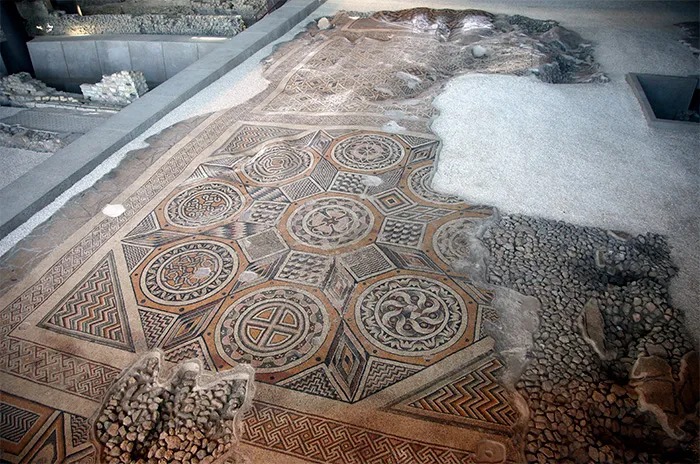 A portion of the great mosaic. This 4th-century pavement covered an area of 1,050m2. In this photograph, its elegant geometric patterns are seen from a walkway during conservation in May 2019. [Image: Lale Köklü]
Instead of abandoning the project, the family decided to preserve the archaeological treasures by integrating them into their new hotel. The Asfuroğlu family worked alongside the Antakya Municipality, the Hatay Archaeology Museum, and the Adana Conservation Council for Cultural and Natural Assets to conduct the largest archaeological excavation in Turkey since the 1930s, and to plan a hotel that would cause the least disturbance to the archaeology. A team of 200, including 35 archaeologists and five restorers, worked for 18 months to complete the excavation and restoration. The finds were superb and included the great geometric pavement, beautiful mosaics such as the 2nd-century AD Bathing of Pegasus, panels devoted to the Muses, and a 5th-century mosaic of Megalopsychia, the physical embodiment of magnanimity, surrounded by birds. 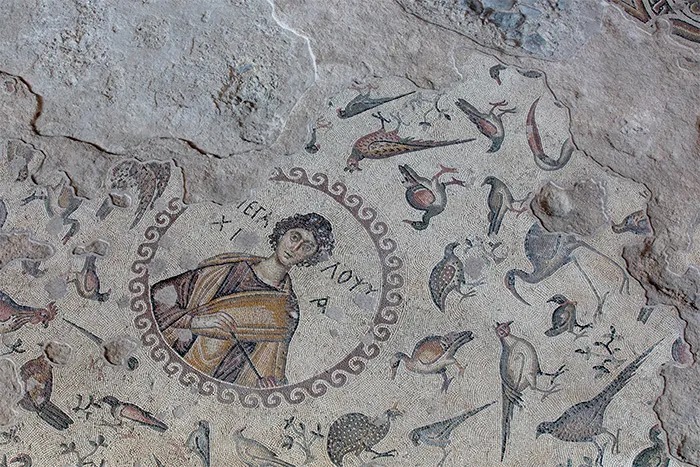 The superb Pegasus or Helikon mosaic, with its Greek inscriptions, is said to contain a remarkable 160 colour shades of plant-dyed tesserae. It was the floor of a chamber that probably would have been a triclinium (dining room), as the main mosaic is surrounded on three sides by a carpet of yellow and white poised squares on which the couches would have been set. The main panel is bordered by a beautiful collection of animal ‘paintings’ in mosaic. Pairs of dogs, goats, deer, hares, and birds face each other over food on eight landscape-shaped panels, while birds flutter in the corner squares. 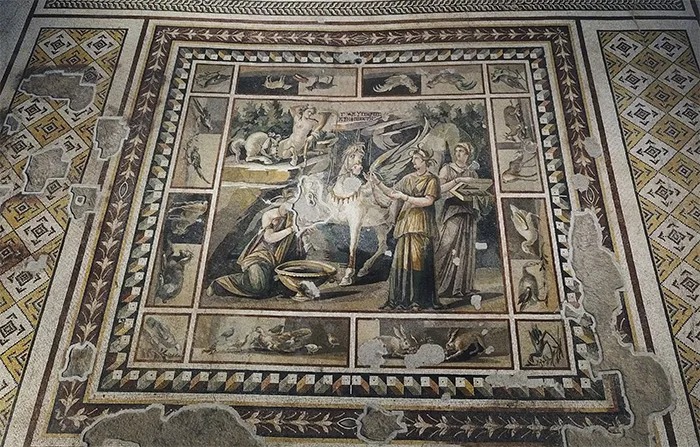 This wonderful 2nd-century AD mosaic shows Pegasus being groomed. [Image: courtesy of the Museum Hotel Antakya]
The wonderful central Pegasus scene occupies most of the floor and depicts the inspiring steed having his hoofs bathed by one water nymph, while another is about to garland his neck with a flower wreath. They are garlanded themselves with reeds, as befits water nymphs, and they probably represent the naiads associated with the Hippokrene and Agannippe springs, which reputedly rose where Pegasus’ hoofs struck Mount Helikon. Drinking and bathing in their waters was supposed to be artistically stimulating. Behind them is a marvellous beribboned and garlanded female centaur, holding a cornucopia from which flows the Hippokrene or ‘Horse’s Fountain’, whose water was supposed to bring forth poetic inspiration. The third female is not wreathed with reeds as a naiad and, unless one is seeing an elaborate arrangement of head scarves, seems to be wearing a Corinthian helmet, which would identify her as the goddess Minerva. Ovid’s Metamorphoses chronicles her visit to Helikon to see Pegasus (‘whom I saw born’) and to see the marvellous spring (Hippokrene) that he had created. She holds a box that seems full of wide ribbons, no doubt to tie about his waist.

A slightly enigmatic Greek inscription appears on the mosaic, starting with an isolated gamma (Γ). The text has been kindly translated for me by Dr Antony Makrinos.