This week, we will be heading to the mountainous outskirts of the Aegean province of Manisa in Turkey and visiting the ancient city of Aigai, one of the dozen ancient cities established in western Anatolia
Istumbled upon Aigai by pure luck. I had come to the northwestern coastal town of Ayvalık to run some errands and, on my way back to Ankara, I decided to take a look at Google Maps and see if there was anywhere I had not been before, somewhere I could pay a quick visit to. 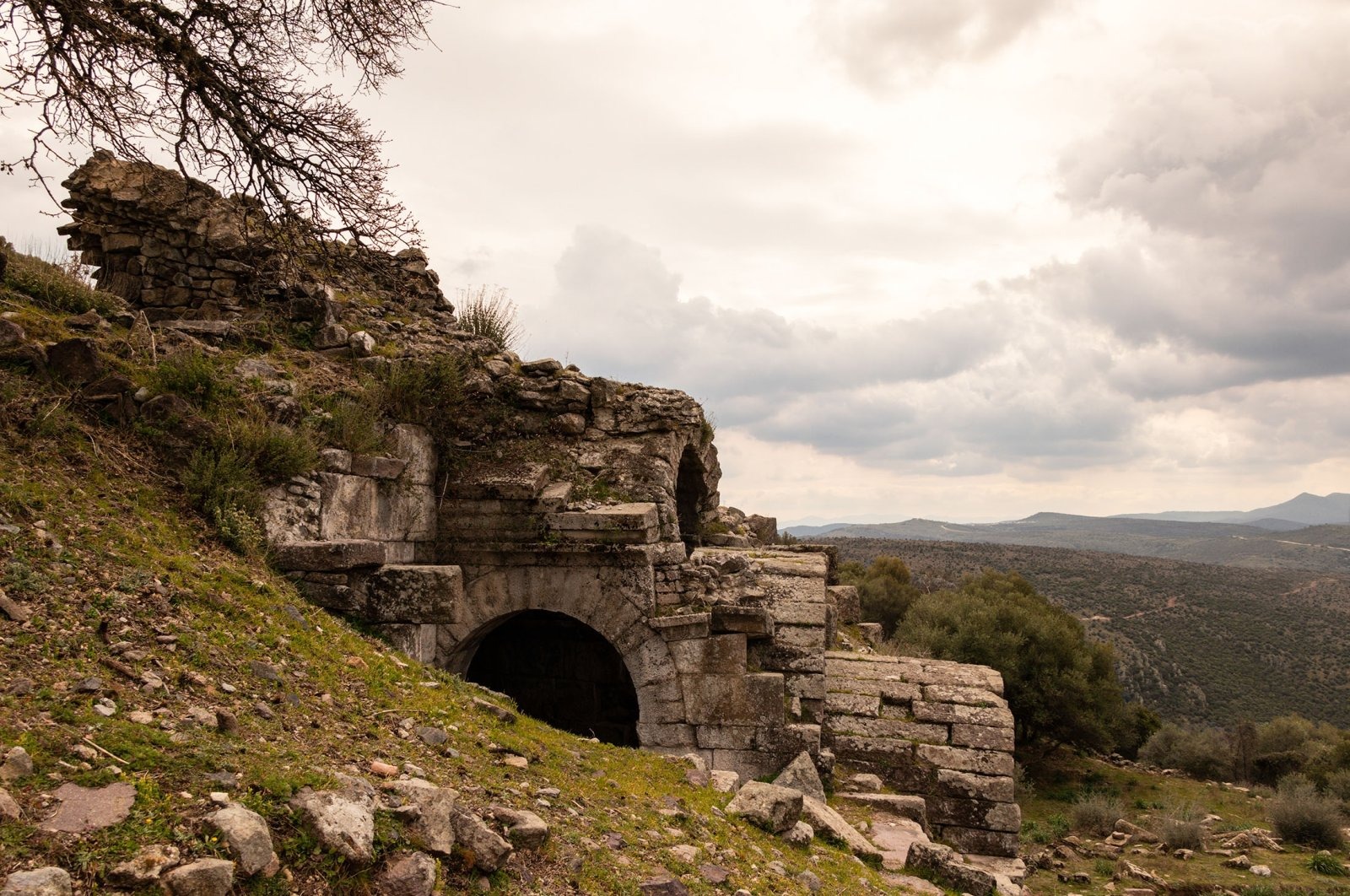 Although I had to take a diversion, which added a good two hours to my overall trip, seeing Aigai was worth it. To get to Aigai, I drove along isolated mountain roads and passed through hillside villages for about an hour. It was a very relaxing road trip accompanied by serene nature and picturesque views.

This ancient settlement is located on the hillside of the Aegean industrial town of Aliağa, right on the provincial border of Izmir and Manisa. It sits high atop Mount Gün, which is a part of the mountain chain of Yunt. The ancient city, whose name comes from the Greek word “aíga” (goat), is often referred to as “the city of goats”, which is not surprising considering its high altitude and rocky lands. The people of Aigai used coins with goats minted on them and regularly engaged in the trade of goods produced from goat hair, bones and skin.

Aigai is one of the less-spoiled ancient sites in western Turkey where you are unlikely to run into large crowds of tourists. The remote location makes it harder to access the city, which makes it a great pick during a pandemic to avoid running into others. 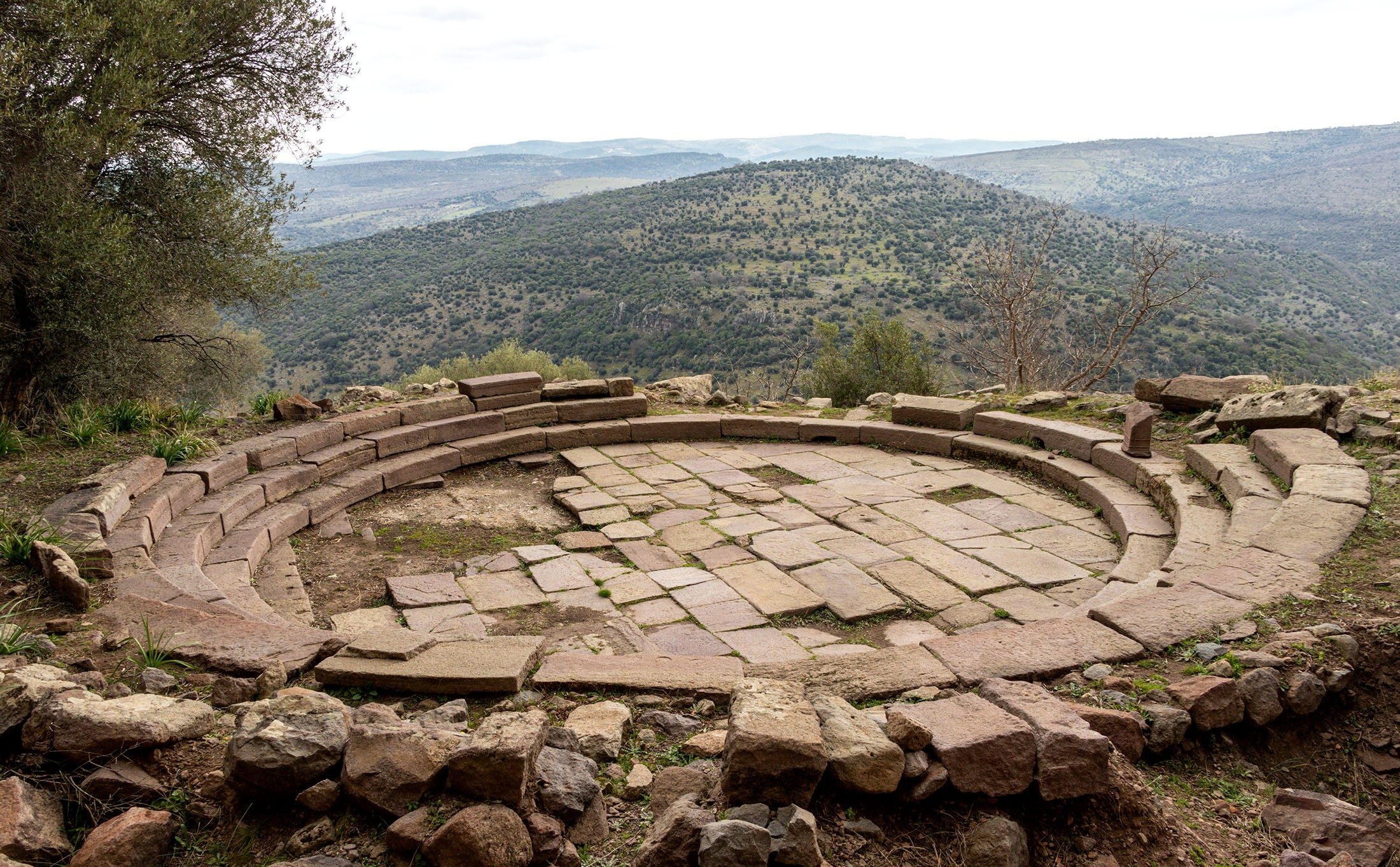 Macella were ancient Roman indoor markets that sold meat and fish. (Shutterstock Photo)
A quick review of Aigai’s history
Aigai, also known as Aigaiai or Nemrutkale, is thought to have been founded in the seventh century B.C., in the ancient region of Aeolis, which comprises the land that stretches between the modern district of Ayvacık in Çanakkale and downtown Izmir. It was a member of the Aeolian dodecapolis, a confederation of 12 cities.

The city reached its golden age during the reign of the Hellenistic Attalid dynasty that ruled the land from three to two B.C. During the years that it was a fully-occupied settlement, Aigai was an important center for commerce and politics. The city was also home to a complex system of water canals that helped protect its people from floods and conserve rainwater.

On account of a severe earthquake in 17 B.C., which caused irreversible damage to the Aegean coast as well as Aigai, the city was rebuilt in subsequent decades. Aigai was deserted in the third century A.D. and remained unoccupied for about a millennium. The findings unearthed in the region date back to the Eastern Roman period and support the idea that the city was resettled by the Byzantines and used as a small settlement for a Christian congregation. 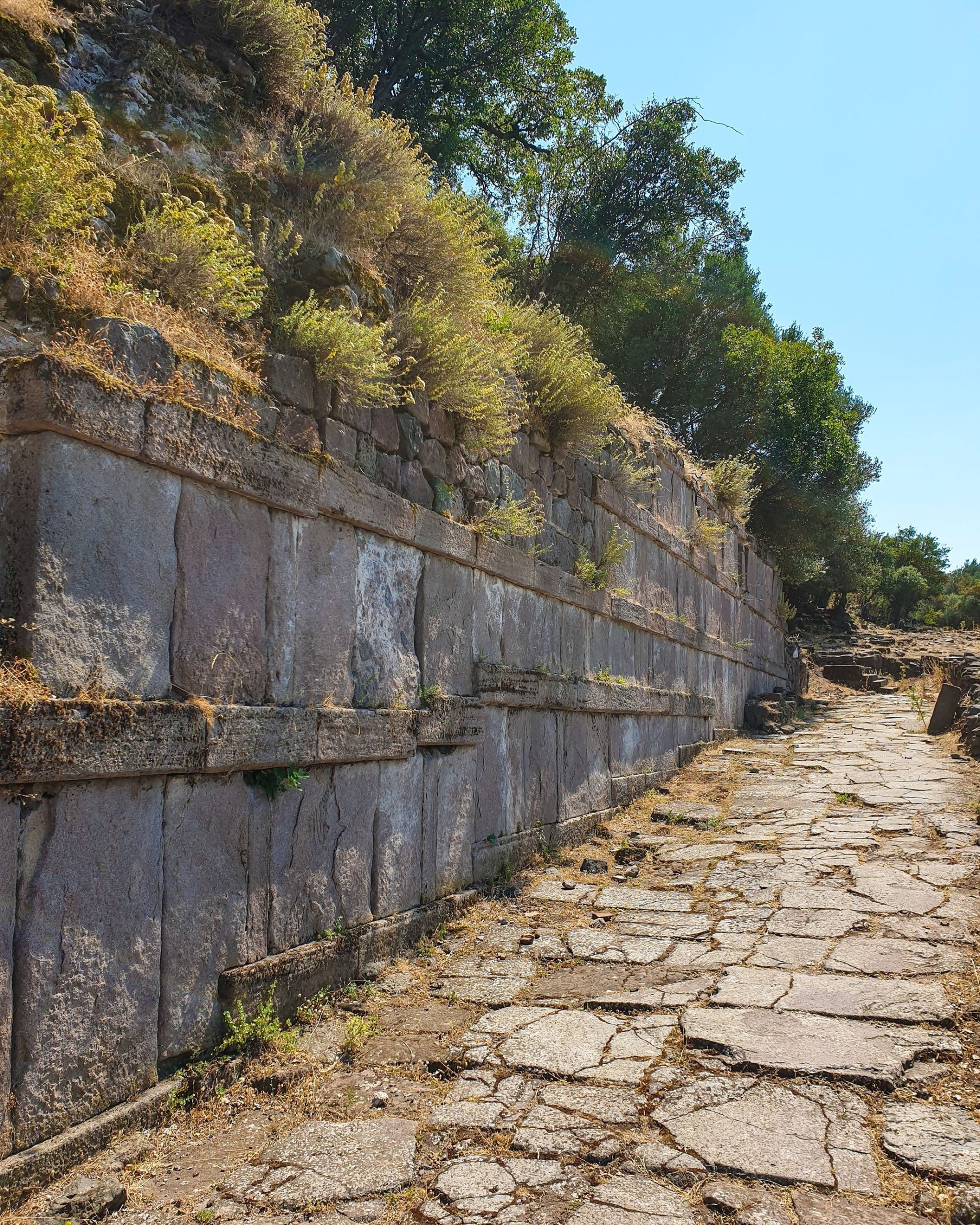 Exploring the ruins
Agora
Agoras were open-air marketplaces or open-air spaces that served as an assembly area for affairs of daily life, religious events and art and social activities. Aigai’s agora was constructed as a triple-story structure, where the ancient Greek residents of the city went about their days. Due to the lack of findings to illuminate the history of the structure, it is not known exactly when the agora was built. However, considering its architectural features, it is believed to have been built in the second century B.C.

Macellum
The macellum was the fish and meat market of ancient Roman cities, kind of like a butcher’s shop. The structure in Aigai was only found recently, in 2018, and it dates to the first century B.C.

The cobblestone roads
Once you are in Aigai, you will be walking through the cobblestone roads that are over 2500 years old. These were unearthed during excavations and found to be completely preserved. The main road allowed the city to be connected with its surroundings.

Bouleuterion
The bouleuterion (city council) was a structure chiefly used during the ancient Greek era, where civil, public and other democratic affairs were discussed. The bouleuterion of Aigai is one of the notable attractions that you should not miss in this ancient city. With a seating capacity of 200, this structure is proof of the importance given to civil life in Aigai. A statue of Hestia Bollaia was unearthed in Aigai’s bouleuterion, indicating that this building was also used by the cult of Hestia as a prytaneion, a building where religious ceremonies are typically held.

I marveled at the sarcophagi with visible carvings and texts on them, as well as the mounds, burial chambers and cists. Many of the sarcophagi have elaborate designs on them, like the ones you usually only see in museums. It left me awestruck to be walking among them still in the same place they were found.

Gymnasium and gymnasium bath
The gymnasium is a hard-to-miss building by the theater. Also, make sure not to miss the gymnasium bath which is adjacent to the gymnasium. This structure was used by the ancient residents who practiced sports to clean their bodies. Recently, archeologists unearthed a beautiful mosaic depicting the Greek god Poseidon in the frigidarium section of the bath.

Theater
The theater of Aigai was built at a spot that shelters the structure from the north winds and provides protection from the sun. 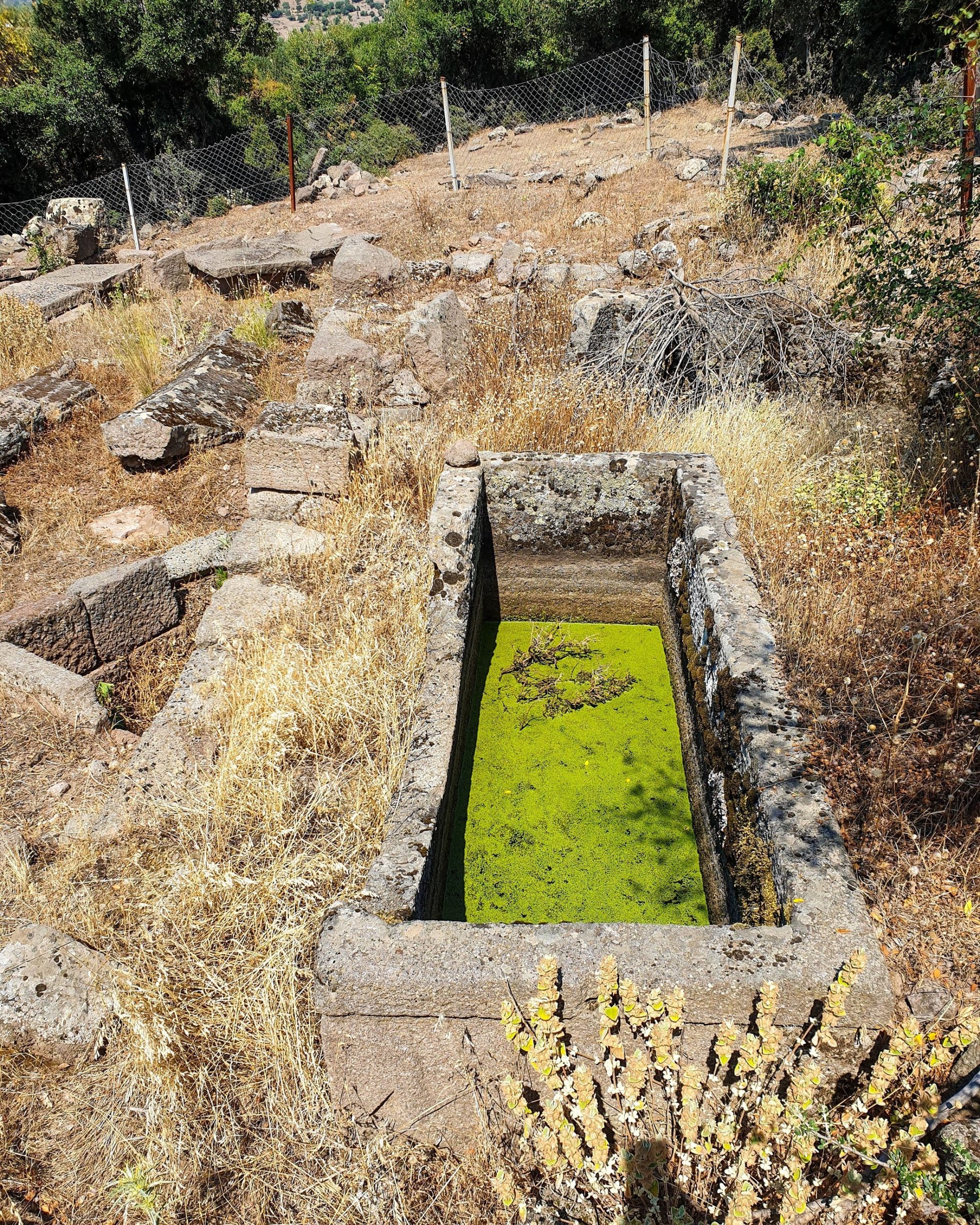 Stadium
The inscriptions unearthed in the agora building show that the stadium was mostly used for gladiator fights. The year when the stadium was built is not yet known.

In addition to the ruins mentioned above, you can also check out other structures in Aigai, such as the Apollon Khresterios Temple, Byzantine remains, the Demeter-Kore Temple, the northern bath and the fortification walls. 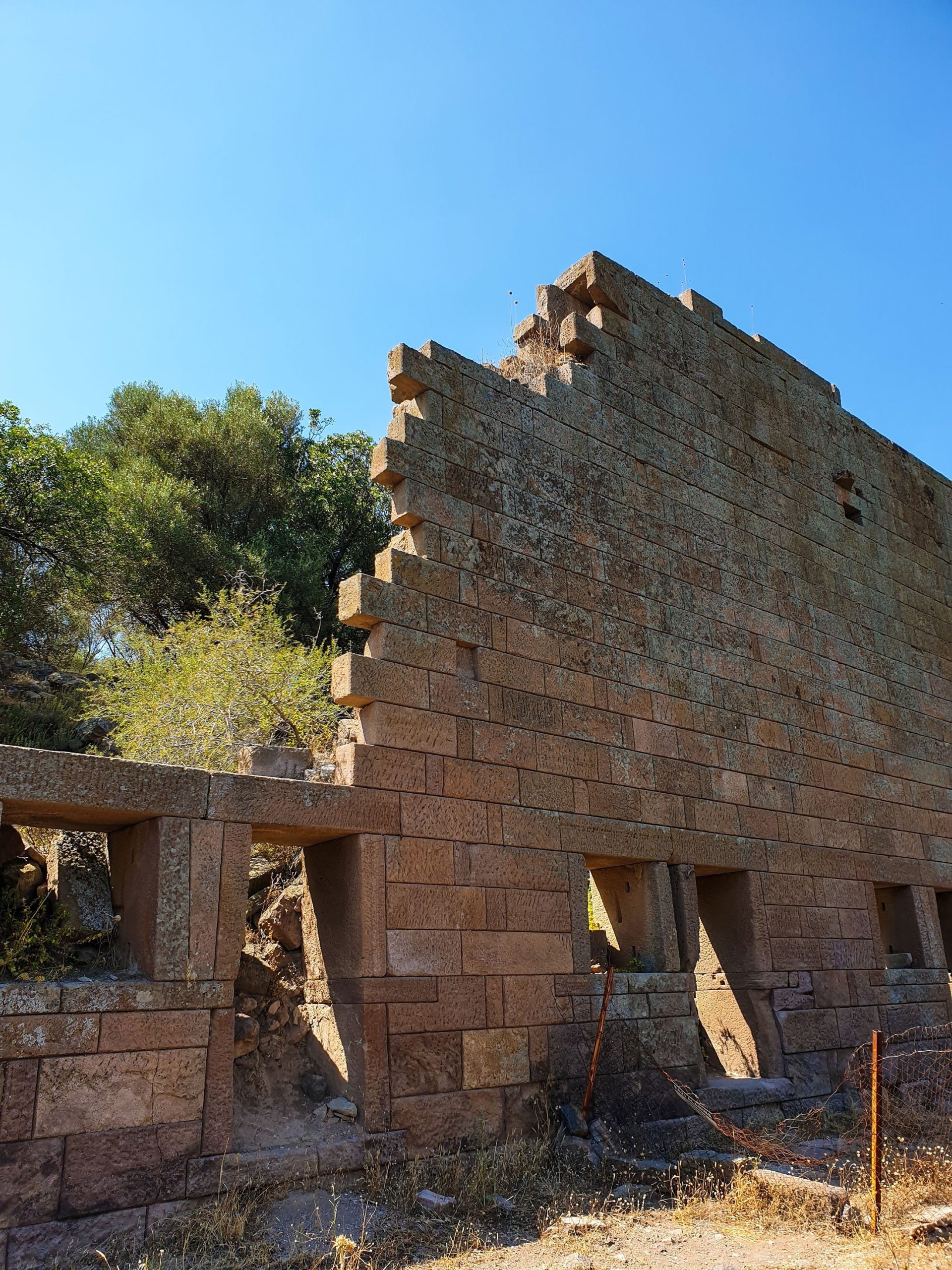 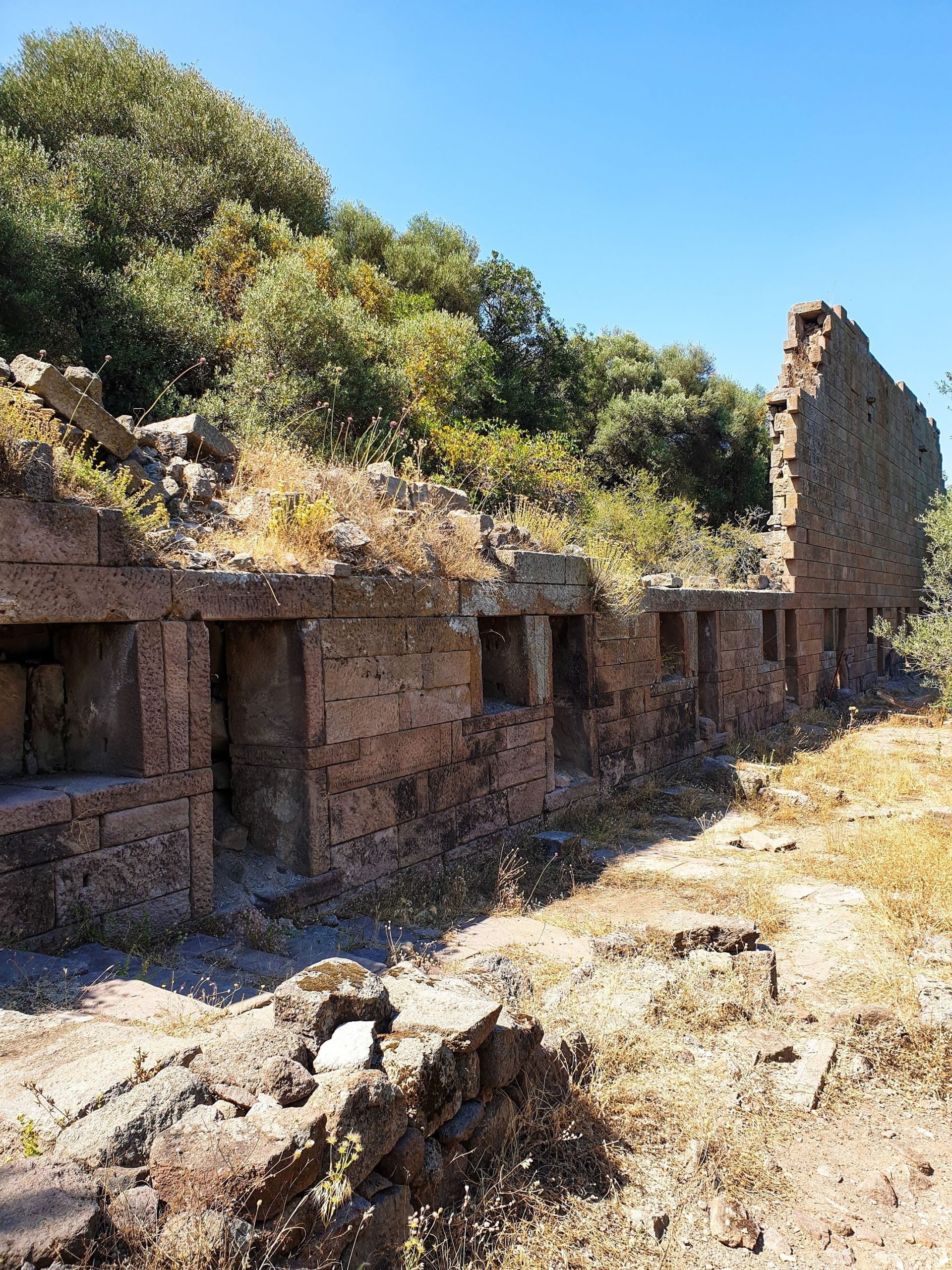 Visiting information
You can visit Aigai every day from 8 a.m. to 7 p.m. in summer and from 8 a.m. to 5 p.m. in winter. The entrance is free of charge. Aigai also has free parking.

It is recommended to wear shoes that are suitable for trekking as the city is spread over rough terrain. Make sure you have plenty of water and some snacks with you to keep up your energy. And, do not forget to fully enjoy the remarkable ruins of Aigai!

So, if you are in the area or planning to pass by, I highly suggest that you spare at least an hour to visit Aigai.