The 12 th century is generally regarded as a period of European decline. In other parts of the world, however, this was certainly not the case. In South East Asia, the Khmer Empire was enjoying its Golden Age. Under the rule of its kings, the empire extended its borders over much of mainland South East Asia. In addition, the prosperity and wealth of the empire allowed Khmer kings to build numerous temples throughout their lands as a sign of their piety. Of these temples, the most famous is undoubtedly Angkor Wat, the largest religious monument in the world. Nevertheless, there are other Khmer temples worth mentioning, one of them being the Bayon Temple. 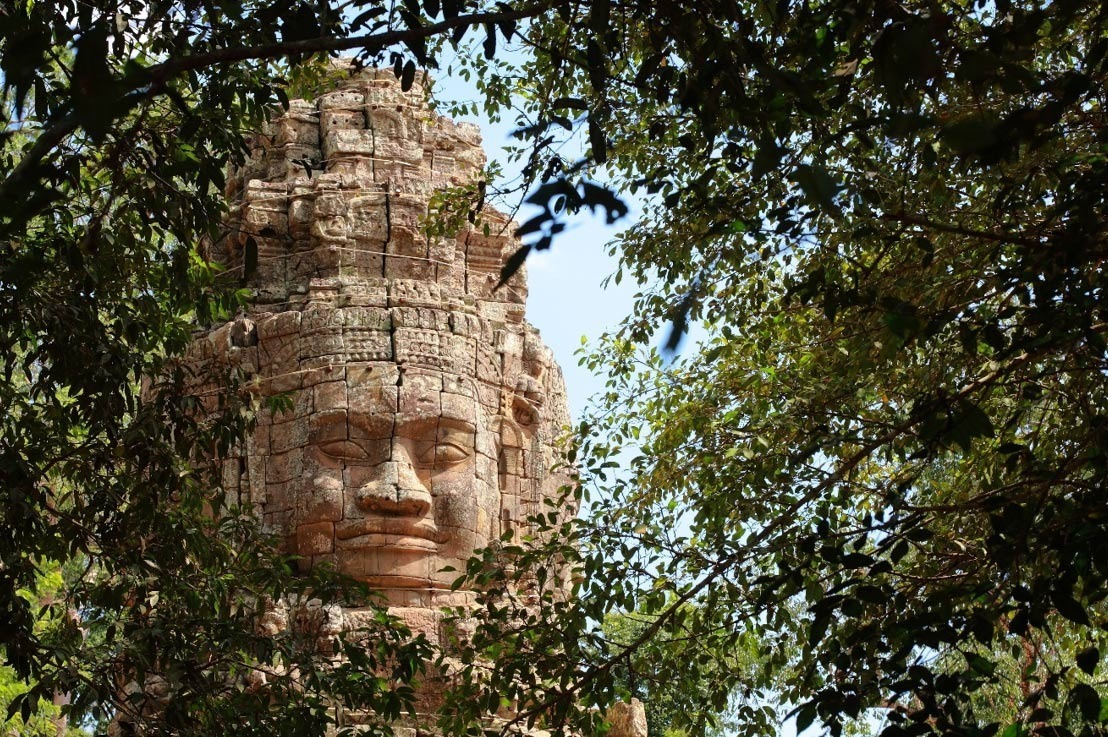 The Bayon Temple was built in the late 12 th or early 13 th century A.D. by Jayavarman VII, one of the Khmer Empire’s greatest kings. The Bayon Temple served as the state temple of Jayavarman’s new capital, Angkor Thom. Given the centrality of Buddhism in the Khmer Empire, the Bayon Temple stood at the center of Angkor Thom. Unlike the other temples built by the Khmer, Bayon Temple is unique in that it was the only state temple built primarily as a Mahayana Buddhist shrine dedicated to the Buddha. After the death of Jayavarman, the features of the Bayon Temple were altered according to the religious belief of his successors, thus containing Hindu and Theravada Buddhist elements that were not part of the temple’s original plans.

The serene stone faces gazing out from the many towers at Bayon Temple, Cambodia. Wikimedia, CC 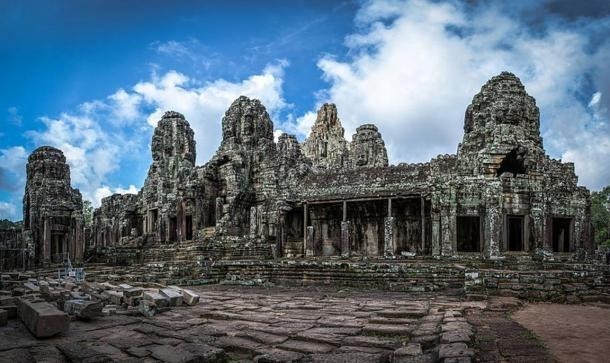 Of all the original features of the Bayon Temple, it is the over 200 gigantic stone faces that probably stand out the most. These faces, dubbed the ‘Mona Lisa of South East Asia’ came in sets of four, each identical, and pointing to a cardinal direction. The location of the faces – on the 50 odd towers of the Bayon Temple, symbolizes the omnipresence of the person whose face is being depicted. According to some scholars, the statues depict the face of the Avalokitesvara, the bodhisattva of compassion. This is supported by the features of the face, in particular the closed eyes and mysterious smile, which represent the achievement of the state of Enlightenment. Others, however, have argued that the faces depicted Jayavarman himself, as they bear an uncanny resemblance to other images of the king. It is also possible that the statues were meant to depict Jayavarman and the Avalokitesvara simultaneously, thus allowing the king to take on the attributes of the bodhisattva. 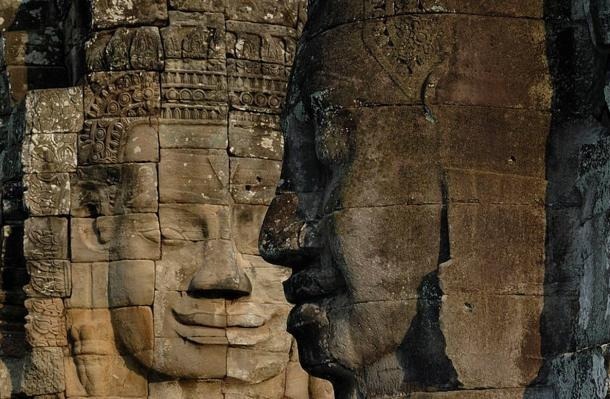 Equally interesting are the reliefs found on the walls of two galleries round the temple. On the outer wall of the outer gallery are scenes from Khmer history and everyday life. There are numerous bas-reliefs depicting the Khmers at war with their neighbors, the Chams. These scenes perhaps highlight the loss of Khmer sovereignty to the Chams, and Jayavarman’s re-conquest of Khmer territory from the invaders. Although many of the carvings on the outer gallery pertain to warfare, there are also scenes depicting domestic and civilian life in the Khmer Empire. By contrast, the reliefs on the walls of the inner gallery depict Hindu deities, including Brahma, Vishnu and Shiva, as well as scenes from Hindu mythology, such as the myth of the ‘Churning of the Sea of Milk’. These reliefs, however, were not made by Jayavarman, but by one of his successors, Jayavarman VIII. In total, there are more than 11,000 carved figures over 1.2 km (.7 mile) of wall. 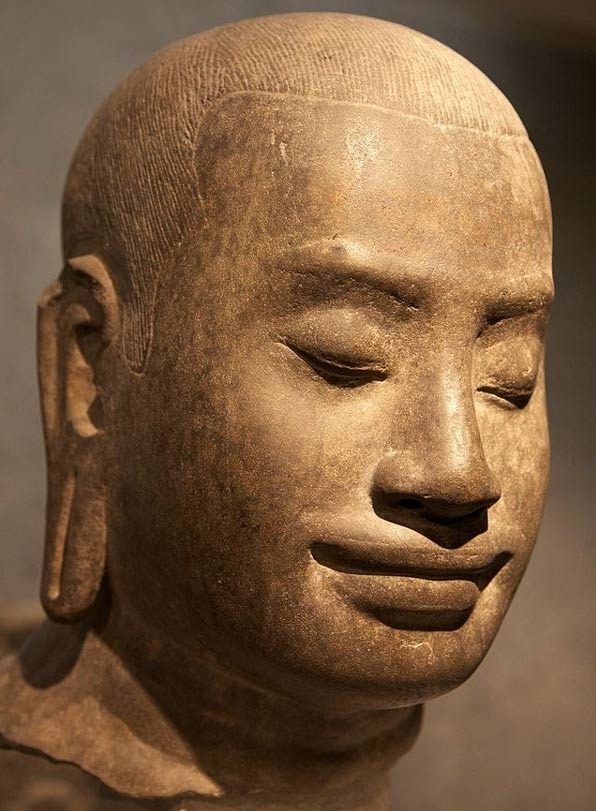 According to Hindu cosmology, the Sea of Milk is the fifth from the center of the seven oceans that surround directional space. At the suggestion of Vishnu, the devas (gods) and asuras (demons) worked together for a millennium to churn the ocean (by pulling on the Serpent King) and release Amrita, the nectar of immortal life. When the Amrita finally emerged along with several other treasures, the devas and asuras fought over it. However Vishnu in the form of Mohini the enchantress manages to lure the asuras into handing over the Amrita, which she then distributes to the devas. Rahu, an asura, disguises himself as a deva and tries to drink some Amrita himself, but Surya (the sun-god) and Chandra (the moon-god) alert Vishnu to this deception. Vishnu then decapitates Rahu just as he is about to swallow the nectar, leaving only his head immortal. 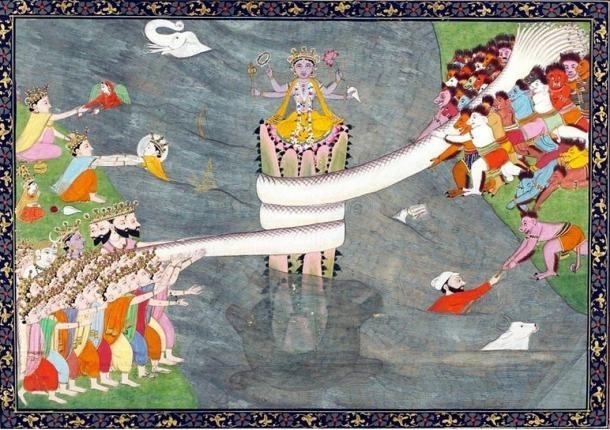 The myth of the ‘Churning of the Sea of Milk’: Kurma Avatar of Vishnu, below Mount Mandara, with Vasuki wrapped around it, during Samudra manthan, churning of the ocean of milk. ca 1870. Public Domain

As of today, the Bayon Temple is part of the Angkor Archaeological Park, which is a UNESCO World Heritage site. When considered along with the other temples in this park, including the famous Angkor Wat, Preah Khan and Ta Prohm, the Bayon Temple offers a unique insight into a once mighty civilization and its religious, political and cultural history. 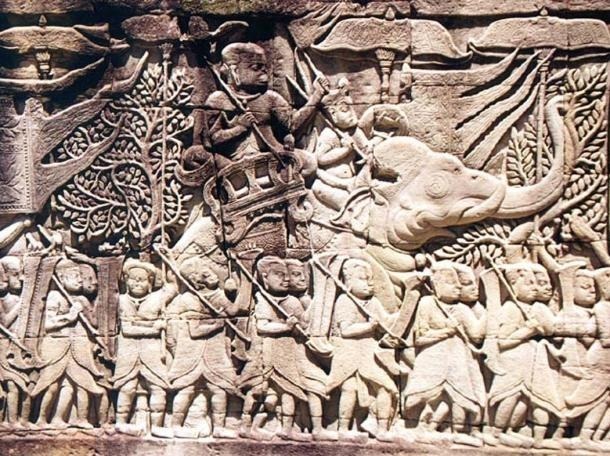 Bas-relief carving from the eastern gallery shows a Khmer army on the march. Wikimedia, CC