Archaeologists at the Sea of Galilee Say They May Have Found the Real-Life Birthplace of St. Peter, First Pope of the Christian Church

Scholars have discovered an inscription that may mark the Church of the Apostles, said to be at St. Peter’s birthplace in Bethsaida. 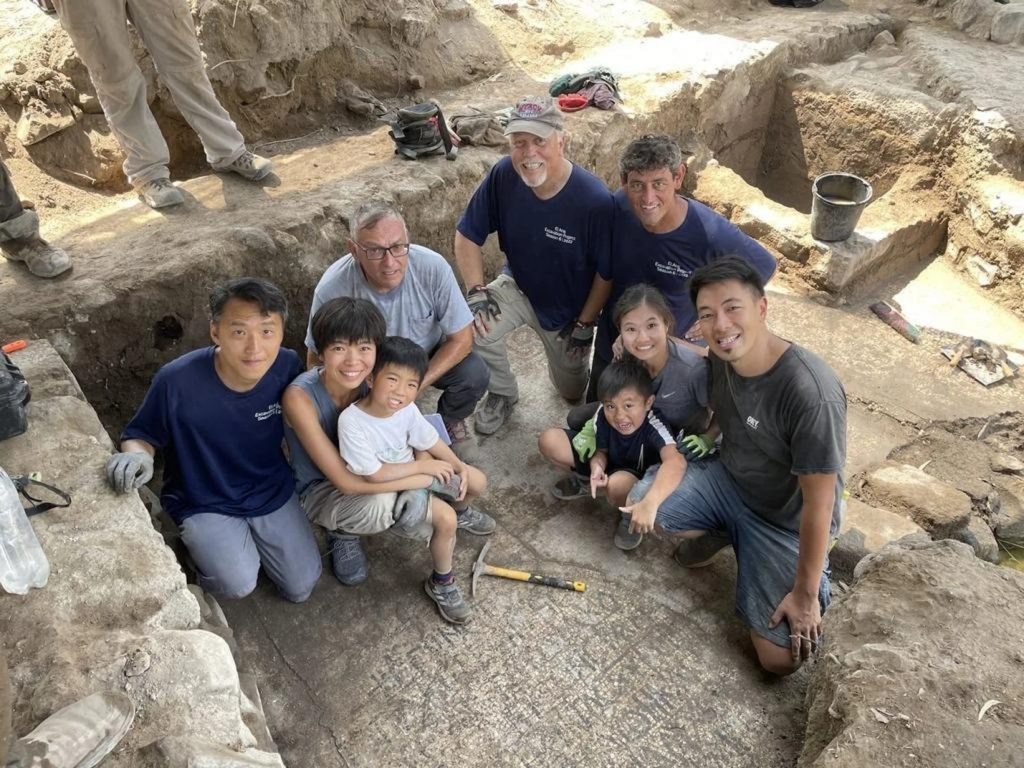 Nyack College professor Steven Notley, academic director of the El Araj Expedition, on site at excavation of the Church of Apostles. He is in the back row wearing a hat, joined by volunteers from Hong Kong. Photo courtesy of the El Araj Expedition.
Archaeologists in Israel have discovered an ancient inscription dedicating a church to St. Peter—and there’s evidence that the place of worship may have been built on the site of the apostle’s birthplace.

Peter and two other apostles, Sts. Andrew and Philip, were born in Bethsaida, according to the Gospel of John. Archaeologists and Biblical scholars have long sought to find the ancient village, narrowing it down to three potential sites.

The El-Araj Expedition, led by the Kinneret Institute for Galilean Archeology and New York’s Nyack College, has been conducting excavations at one of the sites, on the northern shore of the Sea of Galilee, since 2016. It’s found evidence of first-century Roman occupation of El-Araj, such as a bathhouse.

The latest discovery at the dig is a floral pattern mosaic at a church first found in 2019. It bears an inscription calling for the intercession of the “chief and commander of the heavenly apostles”—aka Peter. 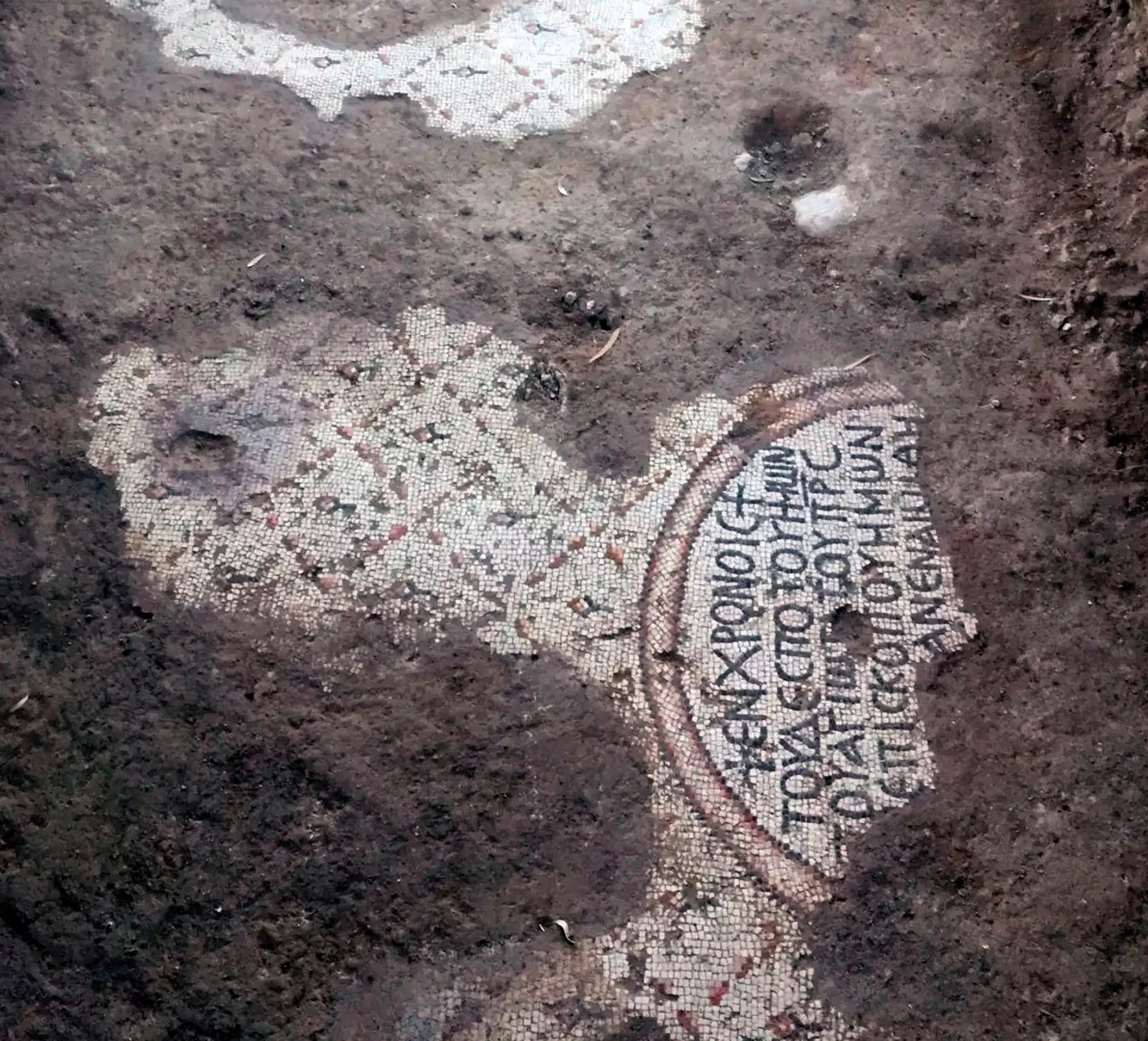 The inscription in the mosaic floor found in the remains of what archaeologists believe is the Byzantine Church of the Apostles built to stand over the home of St. Peter and his brother, Andrew. Photo by Achia Kohn-Tavor, courtesy of Hebrew University, Jerusalem.

“This discovery is our strongest indicator that Peter had a special association with the basilica, and it was likely dedicated to him. Since Byzantine Christian tradition routinely identified Peter’s home in Bethsaida, and not in Capernaum as is often thought today, it seems likely that the basilica commemorates his house,” Steven Notley, a Nyack College professor and the academic director of the dig, said in a statement.

The words support the archaeological team’s theory that the building was the Church of the Apostles, a Byzantine-era basilica described in the writings of Willibald, an eighth-century German bishop from Eichstadt, who made a pilgrimage to holy sites on the Sea of Galilee in 724 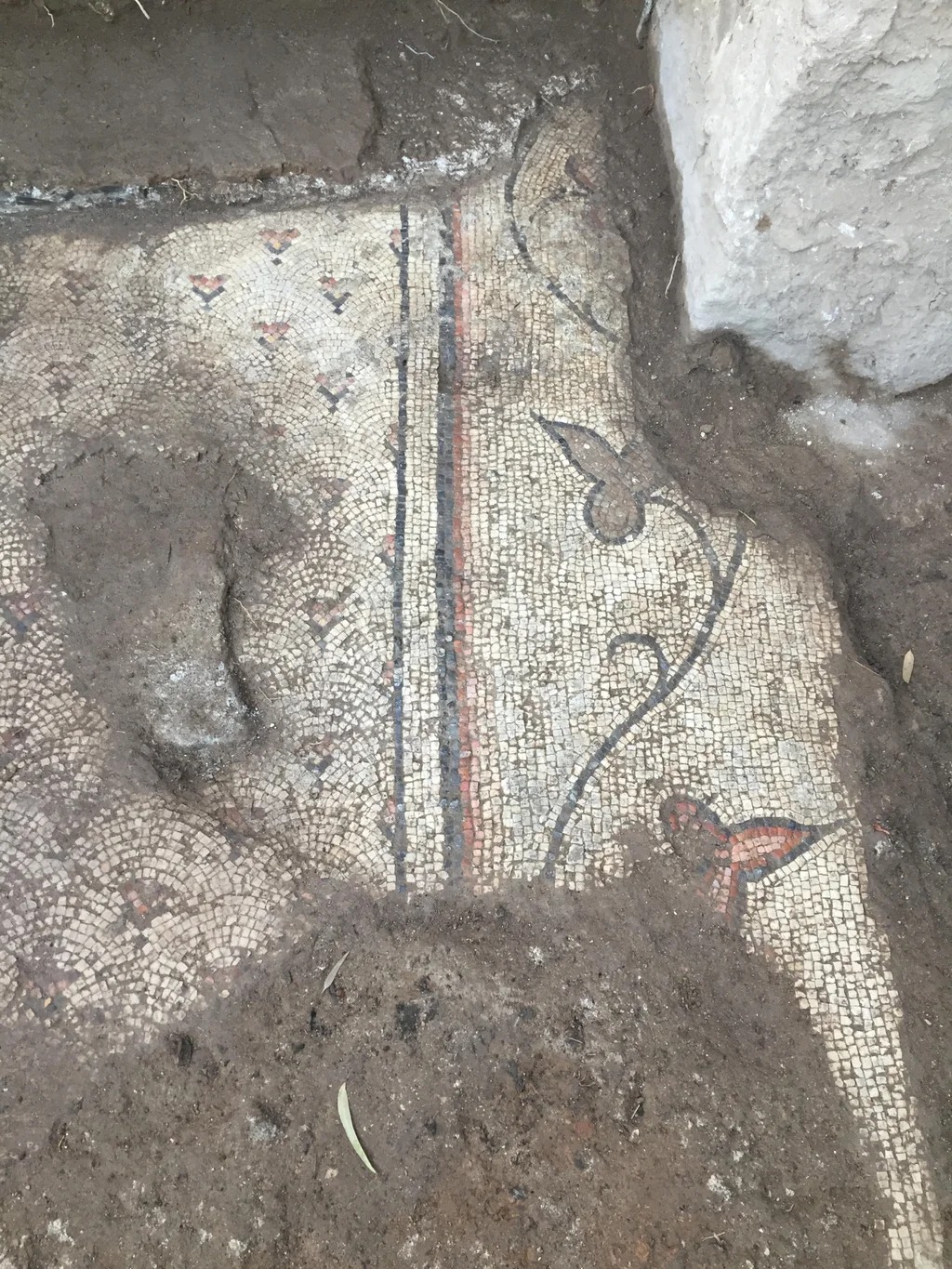 A floral motif in the Byzantine style at what archaeologists believe is the Church of the Apostles in El-Araj. Photo by Achia Kohn-Tavor, courtesy of Hebrew University, Jerusalem.

He wrote that “they went to Bethsaida, the residence of Peter and Andrew, where there is now a church on the site of their house.”

The mosaic that seems to identify the site as Church of Apostles is on the building’s floor. The inscription also references a donor, “Constantine, the servant of Christ” (this would not have been the Roman emperor of the same name), inside a round medallion framed with black tesserae. 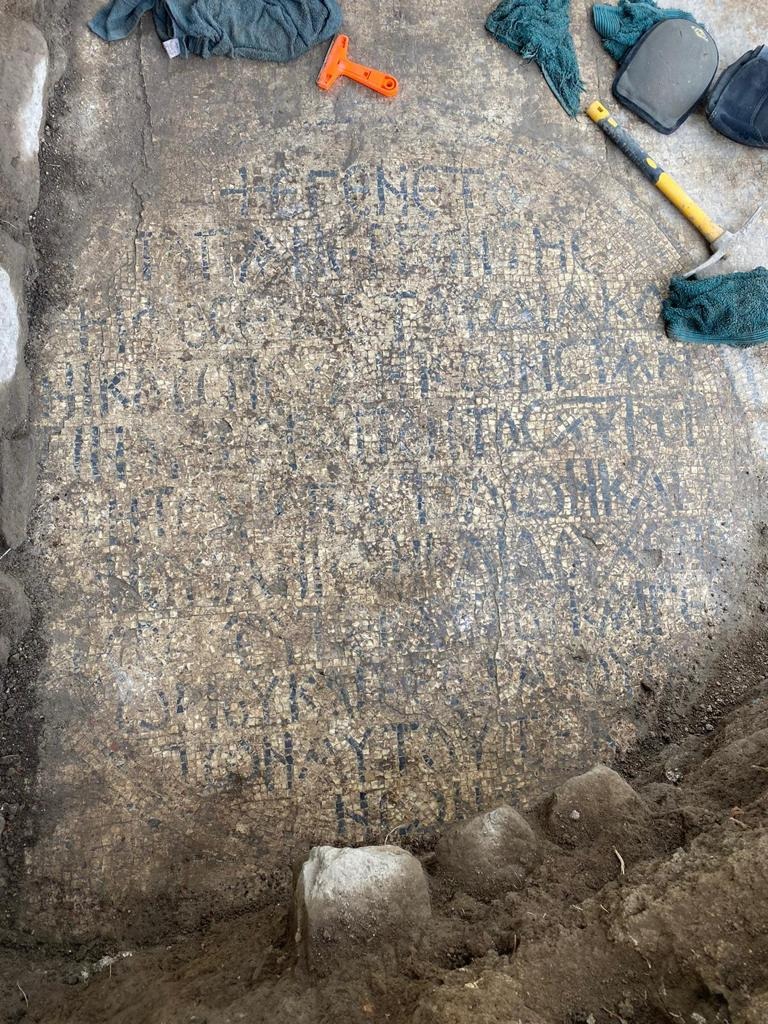 The inscription in the mosaic floor found in the remains of what archaeologists believe is the Byzantine Church of the Apostles built to stand over the home of St. Peter and his brother, Andrew. Photo courtesy of the El Araj Expedition.

The place name Bethsaida means “home of the fishermen,” and Jesus called Peter and Andrew to follow him while they were working as fishermen. The village was also where Jesus fed the 5,000 in the Gospel of Luke.

The remains of the church sit above the Roman bathhouse in the archaeological record, with a 16-inch layer of silt in between, suggesting the village was at one point flooded by the Sea of Galilee. That would fit with the historical record, where references to Bethsaida disappear in the late third century.

That means that when the Byzantines built the Church of the Apostles, the local memory of where Peter and Andrew were born may have been lost. 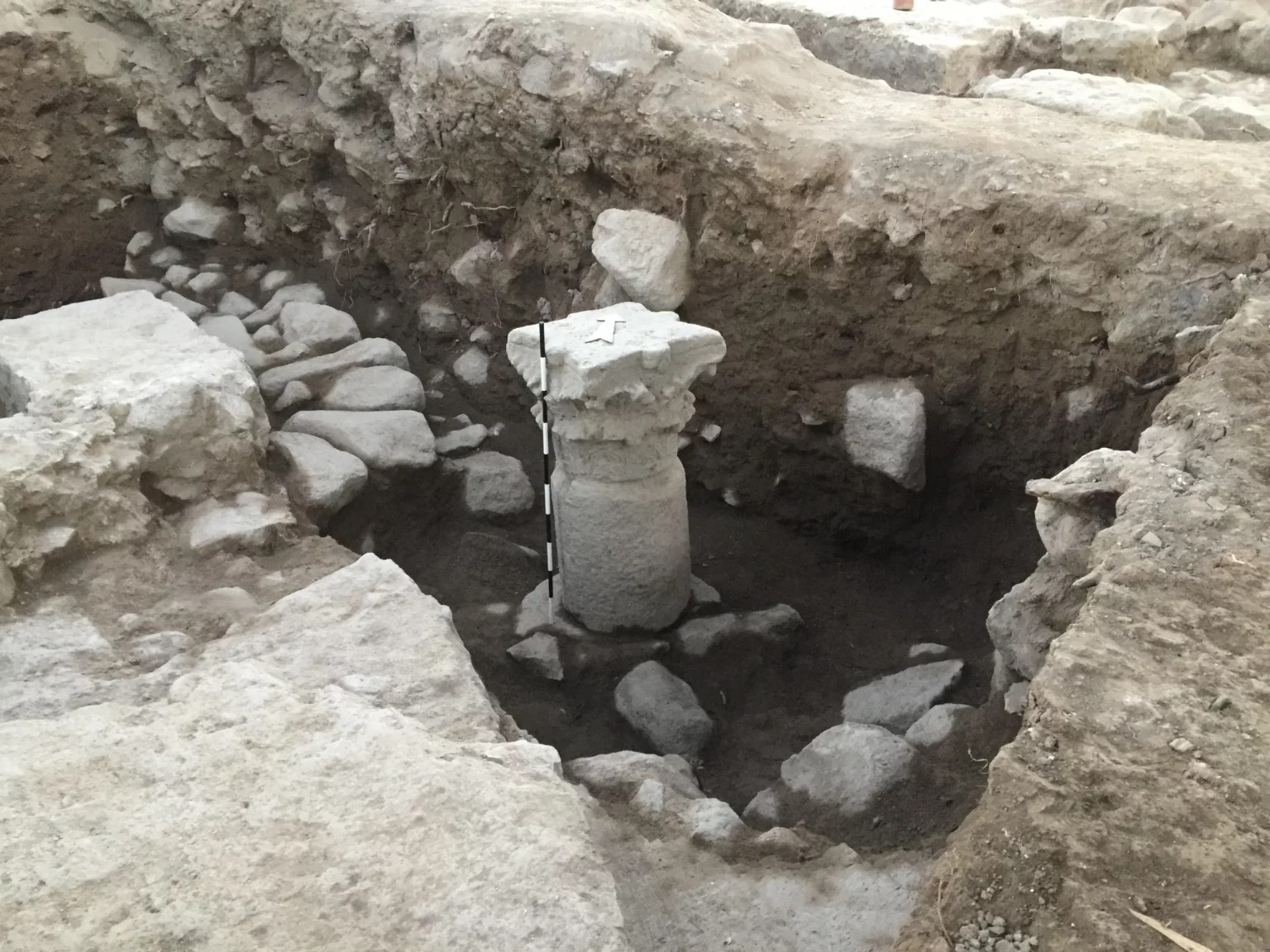 The remains of what archaeologists believe is the Church of the Apostles in Bethsaida, excavated at the El-Araj site. Photo by Achia Kohn-Tavor, courtesy of Hebrew University, Jerusalem.

Though it may prove impossible to tell if the site is two apostles’ birthplace, the new discovery does strengthen El-Araj’s claim to being the historic Bethsaida.

“One of the goals of this dig was to check whether we have at the site a layer from the 1st century, which will allow us to suggest a better candidate for the identification of Biblical Bethsaida,” Kinneret College professor Mordechai Aviam, the excavation’s director, added.

“Not only did we find significant remains from this period,” he said, “but we also found this important church and the monastery around it.”