The installation of a new elevator led to the ancient finds.

The excavations have revealed 2,000 years of the ancient city’s history, including an ornate villa built just before the destruction of the Second Temple in A.D. 70. (Image credit: Assaf Peretz/Israel Antiquities Authority)
Archaeological excavations beside Jerusalem’s Western Wall have unearthed thousands of years of the city’s history — including an ornate 2,000-year-old villa with a private mikveh, or ritual bath.

The Western Wall is one of the holiest sites in Judaism and it’s visited by millions of worshipers and tourists each year. But visitors typically have to descend 142 steps or make a long detour around the city walls to reach the holy site.

Permission was given to a development company in 2017 to build two elevators for better disabled access to make the 85-foot (26 meter) descent beside the existing steps at the edge of the Old City’s Jewish Quarter, and archaeologists began excavating the tiny area in 2019.

“We really were given an outstanding opportunity to excavate an undisturbed plot of land inside the Old City — which today is a great rarity — and thus dig through all the strata beneath a living, active city, in all its complexities and struggles, both past and present,” Michal Haber, an archaeologist at Hebrew University of Jerusalem who took part in the excavation, told Live Science.

The archaeological excavations ended a few months ago, after the discovery of structures and artifacts from at least five different phases of the ancient city’s extensive history. Legal requirements, however, mean that the elevators won’t start operating beside the southwestern end of the Western Wall Plaza until 2025.

Wailing wall
The Western Wall is what remains on the surface of a supporting wall of Jerusalem’s Temple Mount, built by the Roman client king Herod the Great in the first century B.C.

Herod had embarked on an extensive program of expanding and beautifying the Temple Mount structures, which included the Jewish “Second Temple” completed in 515 B.C., supposedly on the site of the First Temple built by the biblical King Solomon, who ruled over ancient Israel.

But in A.D. 70, Roman rulers of Jerusalem destroyed the Second Temple and other structures on Temple Mount as punishment for a Jewish rebellion. In the seventh century, Muslims conquered Jerusalem and built the Al-Aqsa Mosque and the Dome of the Rock shrine. 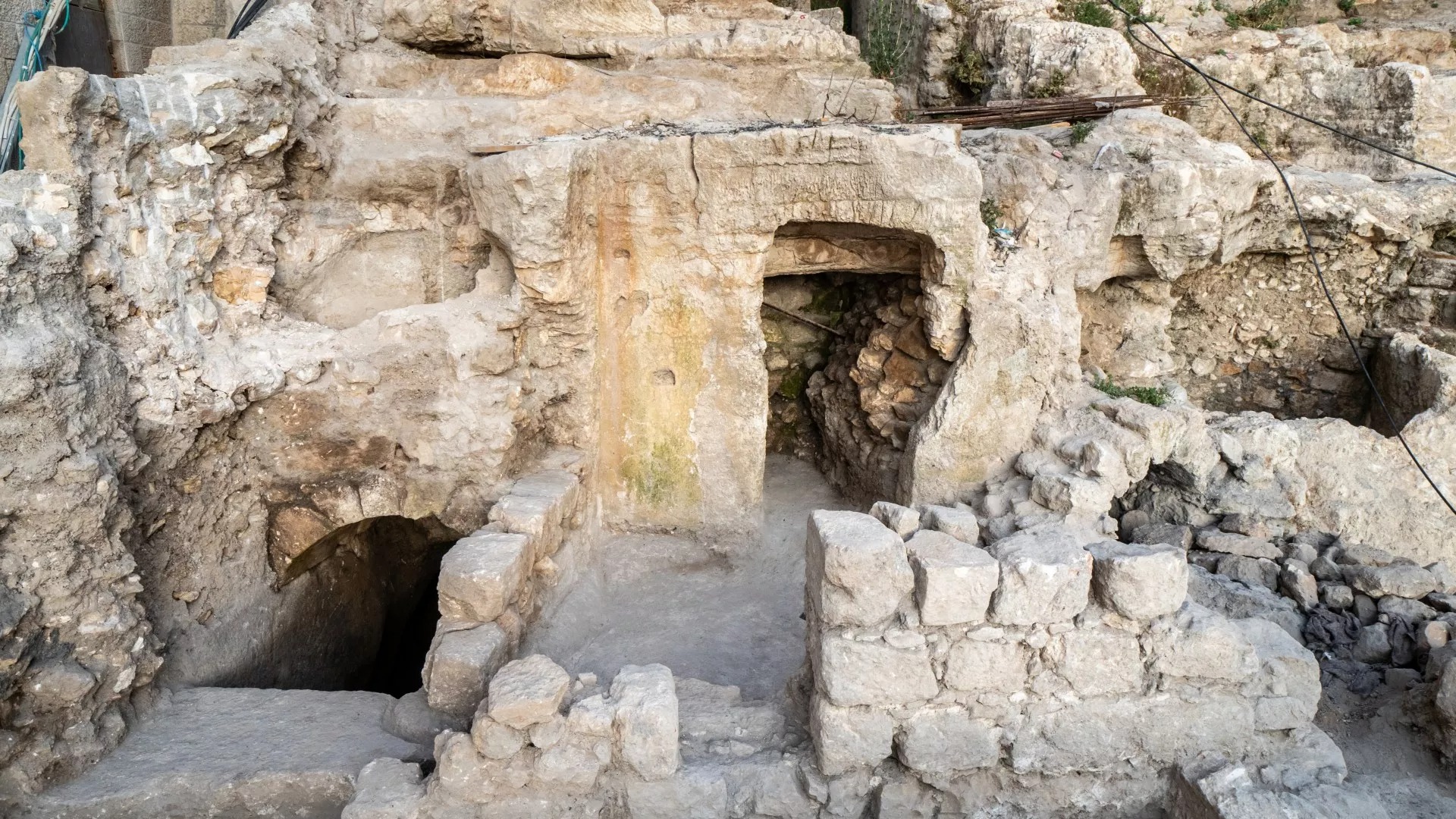 The excavations at the southwestern end of the Western Wall Plaza have revealed artifacts and structures from at least five different periods of the ancient city’s history. (Image credit: Michal Haber/Hebrew University)
Modern entry restrictions to the top of Temple Mount mean Jews are not allowed to pray at the site of the Second Temple, which in tradition was located near the Dome of the Rock, according to Britannica(opens in new tab).

As a result, the Western Wall — thought to be the nearest accessible structure to what was once the temple’s inner sanctum — has become one of the most sacred sites in Judaism.

It’s sometimes been known in the West as the “Wailing Wall” because it’s common for worshippers to weep there over the destruction of the Jewish temple; and supplicants place slips of paper with written prayers into the cracks of the wall. 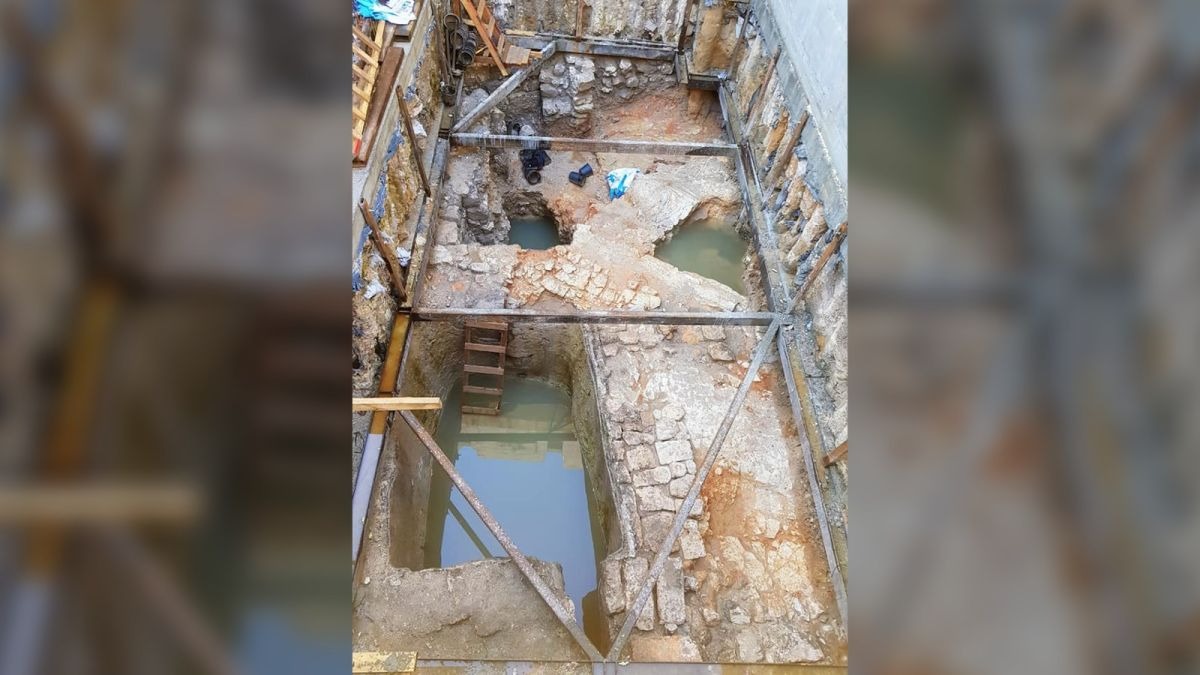 Among the finds are these terracotta water pipes installed by the city’s Ottoman rulers in the 19th century, along an ancient aqueduct built more than 2,000 years ago.(Image credit: Michal Haber/Hebrew University)
A close up of some very old Ottoman-Arab water pipes. They are quite worn with pieces missing.
The Ottoman-Arab water pipes and other artifacts from the different phases of the site are being recorded with 3D digital scans.(Image credit: Assaf Peretz/Israel Antiquities Authority)
One of the uppermost finds on the elevator site are terracotta pipes installed during the Ottoman period in Jerusalem, probably in the 19th century, Hebrew University archaeologist Oren Gutfeld, who led the dig, told Live Science.

The water pipes are still intact, and they continue the line of an aqueduct built during the late Second Temple period — either the Hasmonean or the later Herodian period — to bring water to the city from springs in the hills around Bethlehem, more than 6 miles (10 kilometers) away.

“They used the Hasmonean or Herodian aqueduct as a base for the pipes,” he said. “In some places, the Second Temple-period aqueduct didn’t survive, but all along the way they built the new pipes.” 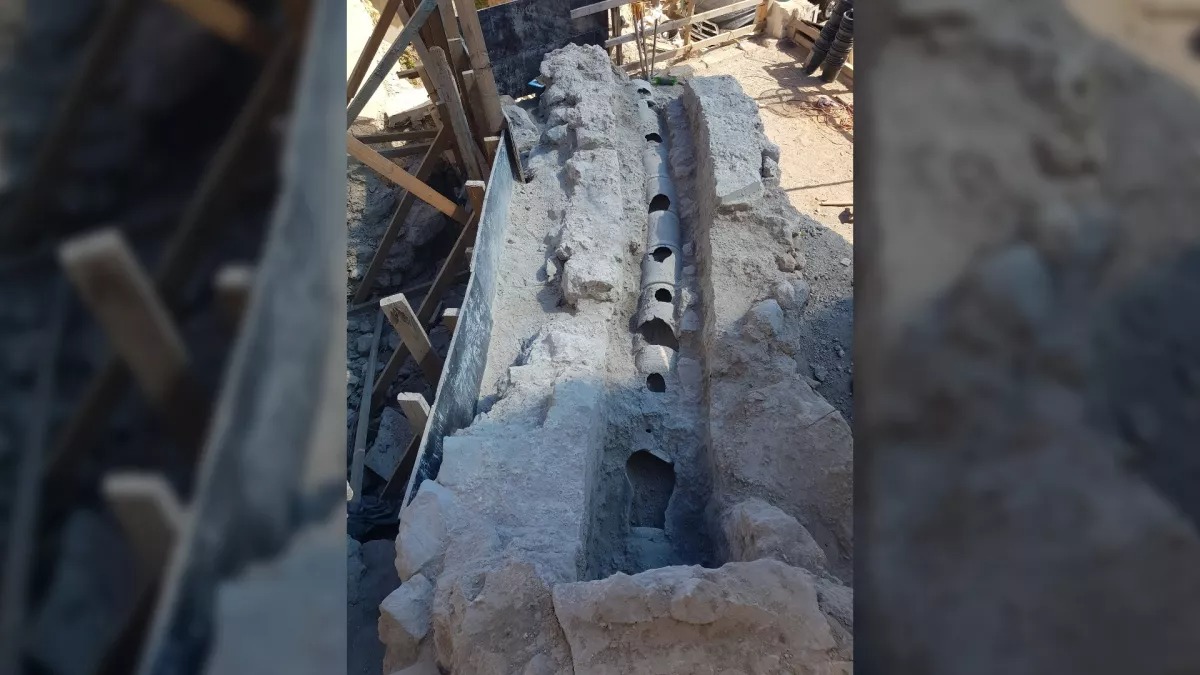 This pottery oil lamp is from an early phase of Jerusalem’s occupation by Muslim conquerors.(Image credit: Michal Haber/Hebrew University)
A hand holding 3 small Ottoman-era pipes used for smoking. One is large and black with straight horizontal lines on the body. The other 2 are slightly smaller, one a reddish brown with vertical stipes and the other more gray and covered in dots.
The archaeologists from Hebrew University also found these Ottoman-era pipes for smoking among the artifacts at the site.(Image credit: Michal Haber/Hebrew University) 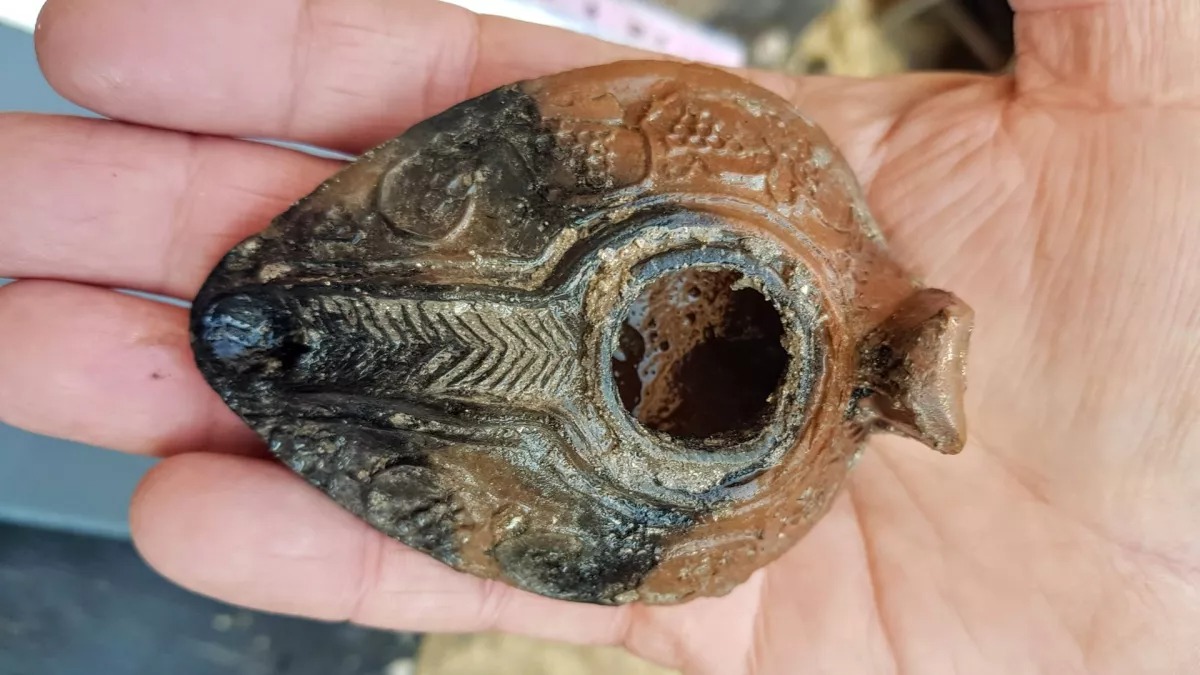 The discoveries also include extensive evidence of the presence of Roman armies in the city after A.D. 135, decades after the Second Temple had been destroyed and Jerusalem had been rebuilt as a pagan Roman city called Aelia Capitolina — a name derived from the family of the emperor at the time, Hadrian, and the city’s dedication to the chief Roman god Jupiter Capitolinus. The Romans also built a temple to the god on the Temple Mount.

Gutfeld said it appeared that the Romans had built a pool of water above the remains of a brick oven, possibly for baking bread. The bricks that were used to build the oven are inscribed with the initials LXF, for “Legio X Fretensis” — the full name of the Roman 10th legion that made them. 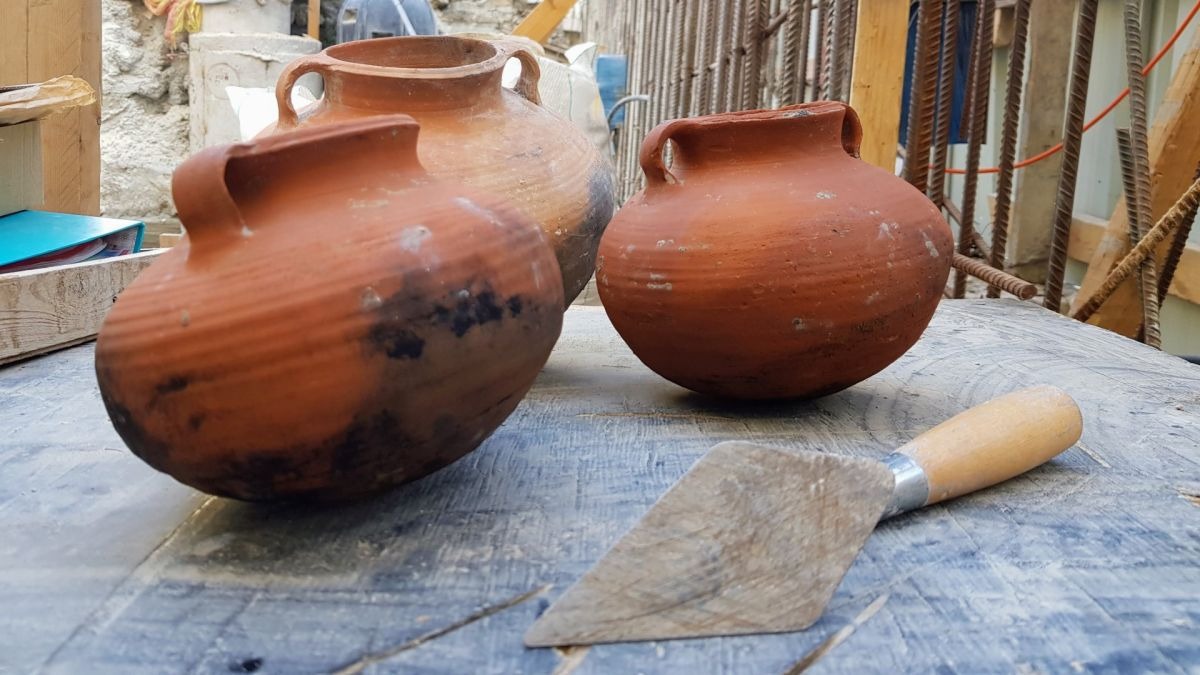 These intact pottery cooking vessels were found in a water cistern that supplied the ritual bath of the villa. (Image credit: Michal Haber/Hebrew University)
The most spectacular find at the site, however, is the skeleton of a wealthy villa that was occupied just before the Romans destroyed the Second Temple in A.D. 70. It includes numerous cooking pots, some of them still intact, and a plastered water cistern that fed a private ritual bath, or mikveh.

Gutfeld explained that Jewish law forbade filling ritual baths by hand — instead, they could only be filled by rainfall or by water flowing from another source; and it seemed that builders placed both the cistern and the mikveh so that water from the ancient aqueduct flowed into them. 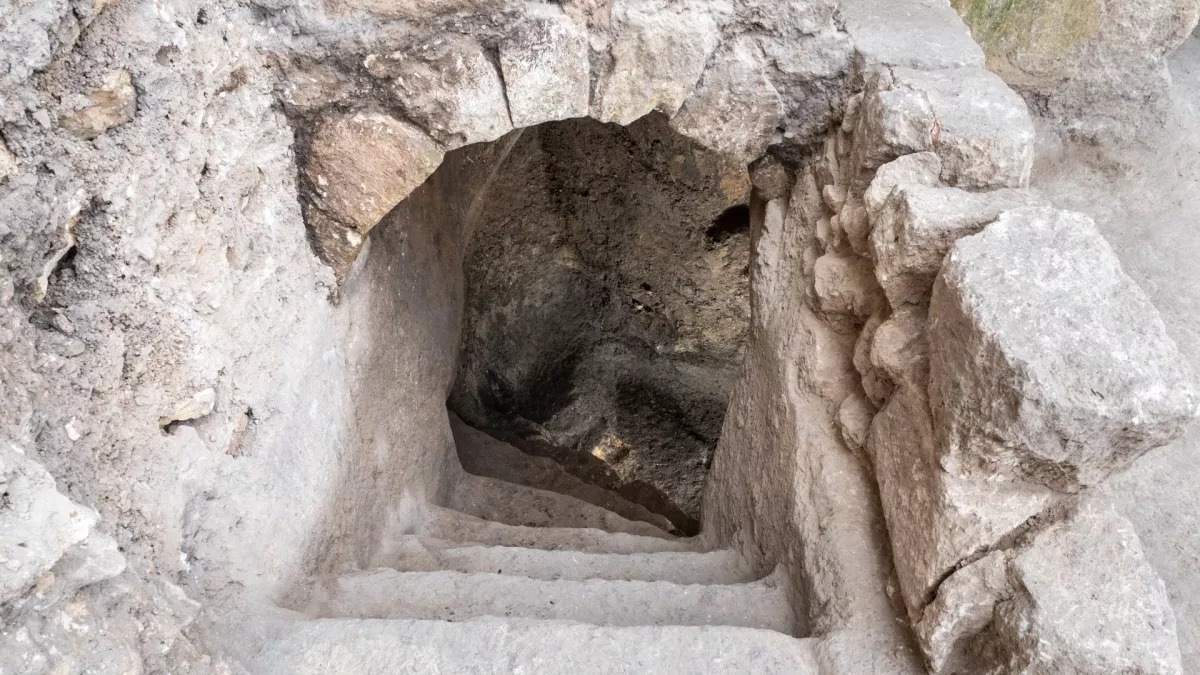 At the time the villa was occupied, the Second Temple nearby was still in use and the area would have been exclusively for very wealthy people, he said

“Our villa is unique because it is really on a cliff right next to the Temple Mount, in a place where you wouldn’t expect to find architecture because of the slope,” he said. “It was like 100 meters [330 feet] from the temple — it must have been some of the best real estate in Jerusalem.”

Haber echoed Gutfeld’s thoughts about the villa and its ritual bath. “The Herodian-era mikveh was a moving discovery,” she said in an email. “I say this as someone completely secular, but who cannot disassociate herself from the significance of such a find so close to the Temple Mount, thinking of the owners of this villa among the city’s elite and what was their fate on the eve of the city’s destruction nearly 2,000 years ago.”