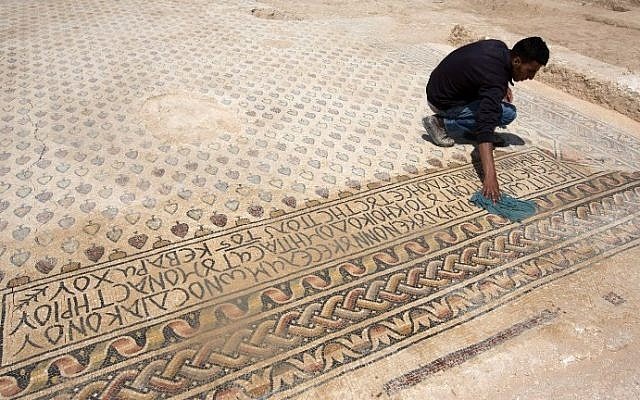 An archaeologist cleans a Byzantine mosaic floor that decorated a monastery during infrastructure work in the Bedouin village of Hura in the Northern part of the Negev desert, Tuesday, April 1, 2014. (photo credit: Menahem Kahana/AFP)
A Byzantine monastery discovered in the northern Negev was revealed to the public on Tuesday.

The monastery, excavated near the entrance to the Bedouin village of Hura by the Israel Antiquities Authority, was uncovered during the construction of a new interchange on the road to the village, which was established in 1989 as part of Israeli efforts to settle the semi-nomadic Bedouin.

The monastery, dated to the sixth century, has mosaic floors decorated with geometric patterns.

The floor of the prayer hall is decorated with leaves in different colors, framed by three borders with three different patterns.

The floor of the dining hall is decorated with colorful birds, pitchers, amphorae, baskets, flowers, leaves and other geometric shapes, with a diamond-shaped pattern in the background. 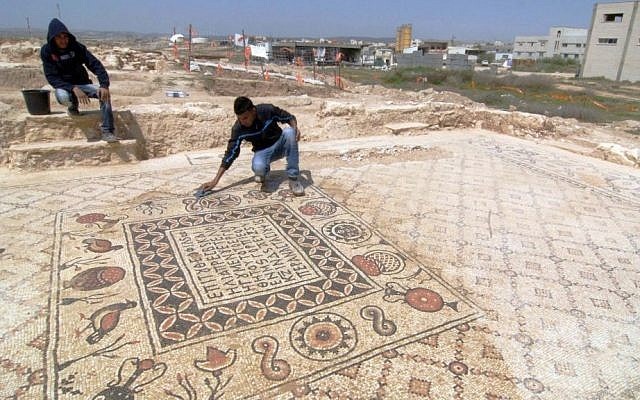 A man unveils Greek inscriptions as he cleans a Byzantine mosaic floor that decorated a monastery and that was discovered during infrastructure work in the Bedouin village of Hura, Tuesday, April 1, 2014. (photo credit: Flash90)
Both floors were also decorated with Greek inscriptions bearing the names of the abbots of the monastery — Elijah, Nonos, Salomon and Ilrion — as well as the dates of the monastery’s construction. One of the inscriptions has a Syriac translation beside the Greek.

The inscriptions indicate that the monastery’s mosaic floors were laid down during the second half of the 6th century.

The building collapsed at the end of the Byzantine period. After that, the rooms in its eastern wing, which had a white mosaic floor, were mostly destroyed by landslides. The western wing survived, and was revealed Tuesday. 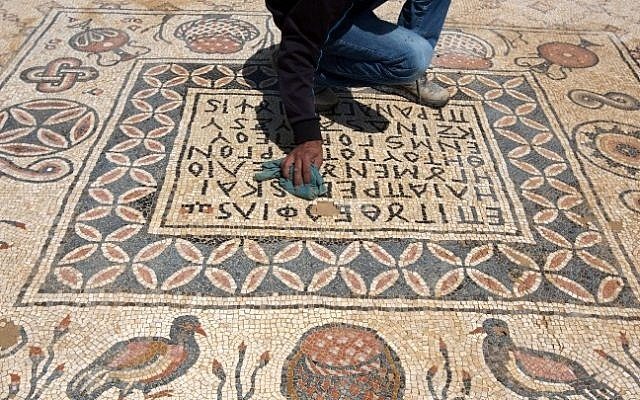 One of the Greek inscriptions found on the mosaic floor of a 6th-century Byzantine mosque near Hura, in the Negev. (photo credit: Menahem Kahana/AFP)
Along with the floors, various objects were excavated at the site: pots, bowls and other pottery; glass objects, and coins.

Though the press was invited to photograph the site, it was not yet opened to the public, for safety reasons.

The Israel Antiquities Authority, National Roads Company, Hura Municipality and Wadi Atir Foundation intend to transfer the monastery and mosaic floors to Wadi Atir, a Bedouin-built farm and tourist site in the Negev.