Archaeologists have uncovered a cache of 2,200-year-old silver coins near the Dead Sea, which they say is the first physical proof that Jews fled to the Judean Desert during the upheaval and persecution under Hanukkah villain Antiochus IV Epiphanes.

As told in I Maccabees 2:29, in the period prior to the Maccabean Revolt, righteous men were exhorted to leave everything and flee to the desert. “At that time, many who sought righteousness and justice went to live in the desert.” Subsequently, while upholding the laws of Shabbat, they were slaughtered by the king’s forces.

During rescue excavations in May, a small, incredibly preserved wooden box holding 15 silver tetradrachma coins was discovered in a cave in the Darageh Stream Nature Reserve. The coins were minted by Ptolemy VI, king of Egypt, and date to up to 170 BCE, which is just before Seleucid King Antiochus IV Epiphanes began handing down harsh measures against Jews’ freedom of worship.

According to Eitan Klein of the Israel Antiquities Authority, which announced the find on Tuesday, the hoard was stashed by a fleeing Jew, who presumably subsequently died in the violence leading up to the Maccabean Revolt.

“Here, we have good proof that people really were fleeing,” said Klein, deputy director of the IAA’s Theft Prevention Unit, just like it was written two thousand years ago in the apocryphal book.

“In general when we find a cache of coins, they tell us a story of war. Otherwise people don’t run off and leave their life savings,” said Klein. In today’s terms the coins are worth about two months’ salary at an average wage, he noted. “You don’t just go off and leave NIS 30,000 in a cave.”

Since 2017, the IAA has spearheaded an ambitious survey of some 500 caves in the Judean Desert — in part to look for more Dead Sea Scrolls, in part to beat antiquities looters to priceless archaeological artifacts. The pristine wooden box was discovered in one of the four Muraba’at Caves where, some 70 years after the first scientific excavations took place in the 100-meter cave near the Dead Sea, exciting new objects are still coming to light, including glimpses of scroll fragments and amazingly preserved textiles. 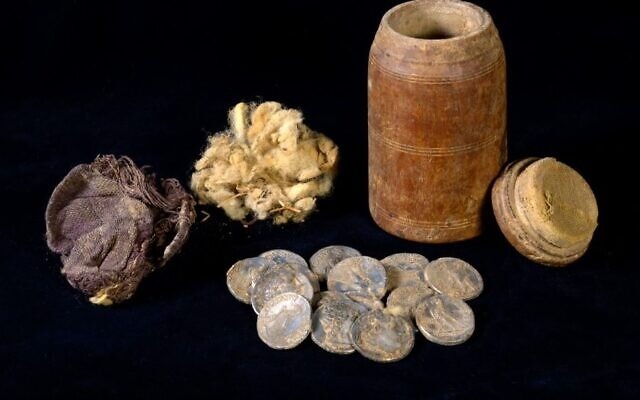 The operation is being undertaken by the IAA in cooperation with the staff officer of the Archaeology Department of the Civil Administration in Judea and Samaria (COGAT,) and has been funded in part by the Ministry of Jerusalem Affairs and Heritage.

“The Survey and Excavation Project carried out by the Israel Antiquities Authority in the Judean Desert over the past six years has proved itself, in that thousands of archaeological artifacts have been saved from destruction and plundering, including parts of biblical scrolls, arrowheads from the Bar Kochba Revolt, a 10,500-year-old basket, and more,” said Amir Ganor, IAA director of the excavation. 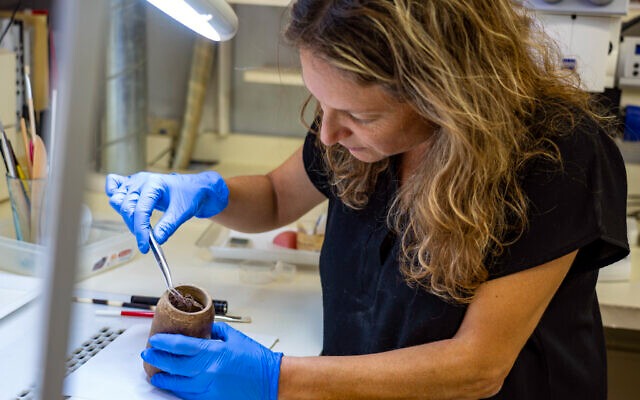 The newly discovered round wooden box looks almost fresh from the ancient lathe that would have made it. Inside were the 15 silver coins, as well as a piece of purple-dyed cloth and some wool stuffing. The dry desert climate, combined with the cave’s protected atmosphere, preserved these organic materials in excellent condition, the IAA’s Naama Sukenik, director of the Laboratory of Organic Materials, told The Times of Israel.

Sukenik said that her team is still in the preliminary stages of research and she does not yet know what type of wood went into creating the beautiful tubular box. She likewise is waiting to see what kind of dye was used on the purple cloth — from common plants or luxurious, royal snail-base dye.

There are few parallel artifacts to the wooden box, she said. “But there is no doubt that the find is very unique, mainly because of the whole complex tale it tells us with the burial of a safe 2,200 years ago,” said Sukenik. 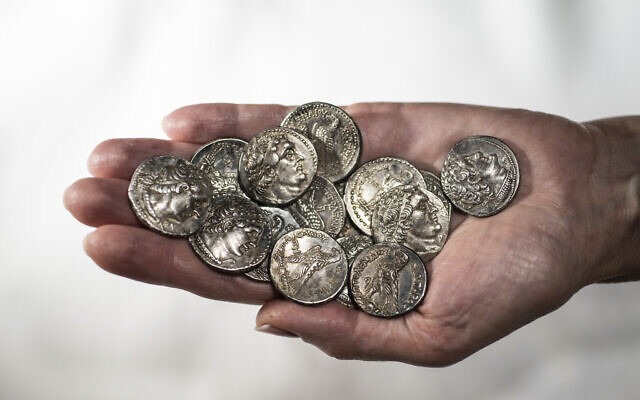 Dr. Naama Sukenik, director of the Laboratory of Organic Materials lifts the woolen cloth from the 2,200-year-old wooden box discovered in Wadi Muraba‘at near the Dead Sea in the IAA laboratory. (Yaniv Berman, Israel Antiquities Authority)
The dating of the coins themselves could serve to anchor the artifacts to the moving description in I Maccabees 2:29, in which the eventual Maccabean Revolt founder Mattathias cries out for righteous men to leave their lives of persecution and live in the desert or eremos, a Greek term for a place desolate of people or animals. (Incidentally, in 2 Maccabees we find the earliest Greek text to use the word “Judaism,” according to scholar Malka Z. Simkovich.)

2,200-year-old silver coins that were discovered in a wooden box inside a cave in Wadi Muraba‘at near the Dead Sea. (Shai Halevy, Israel Antiquities Authority)
The silver tetradrachmas were minted by Ptolemy VI, king of Egypt, who reigned contemporaneously with his uncle, Antiochos IV Epiphanes (often called “the Wicked”), who ruled over the Seleucid Kingdom. Between 270 BCE and 168 BCE, the Seleucids and Ptolemies fought the Six Syrian Wars. After the fourth war, the territory of Judea was conquered by Antiochus III, in the Battle of Paneion in 200 BCE. According to the IAA, the three earliest coins in the trove were minted in 176/5 BCE. The latest coin dated to 171/0 BCE. Curiously, the name “Shalmai” was incised in Aramaic script on one of the coins.

“It is impossible to know where the person fled from. From somewhere in Judah, maybe Jerusalem… Every time there was a war or a traumatic event, people fled to the desert and hid in caves, which were their ‘safe rooms.’ They’d leave their homes, and take only their important items,” Klein told The Times of Israel. 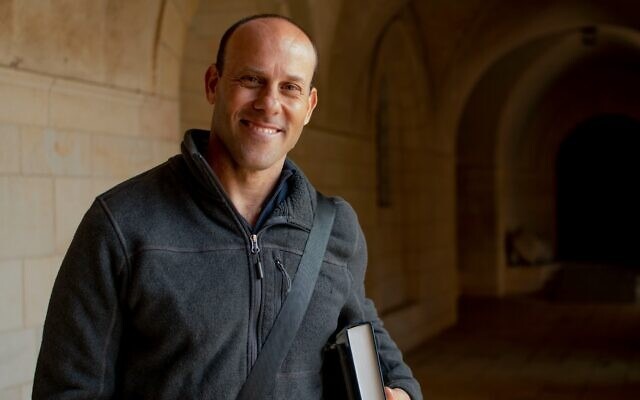 At that time, the caves were very difficult to reach, which also shows the individual’s desperation, said Klein. “Today, we can take a jeep. In that period, there was a path to the Dead Sea, but it was flanked by many unfriendly tribes and it was dangerous to walk in the middle of the desert.” 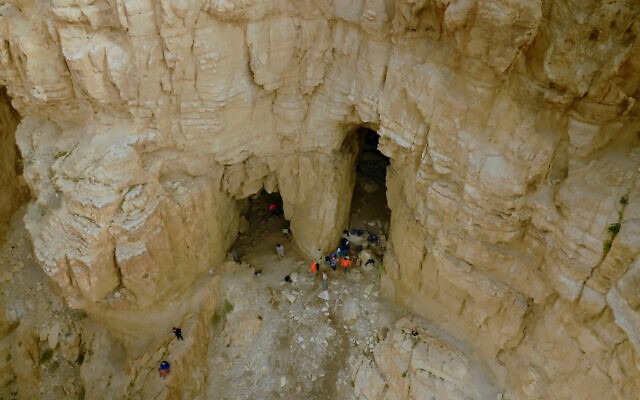 Wadi Muraba‘at near the Dead Sea. (Emil Aladjam, Israel Antiquities Authority)
But the presumed Hasmonean supporters were not the only rebels to have used these caves. In the early 1950s, the French priest archaeologist Roland de Vaux discovered a cache of letters in a cave — one of which was penned by the 132–136 CE Bar Kochba revolt leader Simon ben Kosebah himself.

Klein said that regardless of previous excavations, the caves still offer a huge potential for more excavations and work there will be ongoing. “We are checking to see if there are new things to uncover and finding a lot,” he said. “We have a lot more caves to check out, but are concentrating our efforts on those places that have the most potential.” 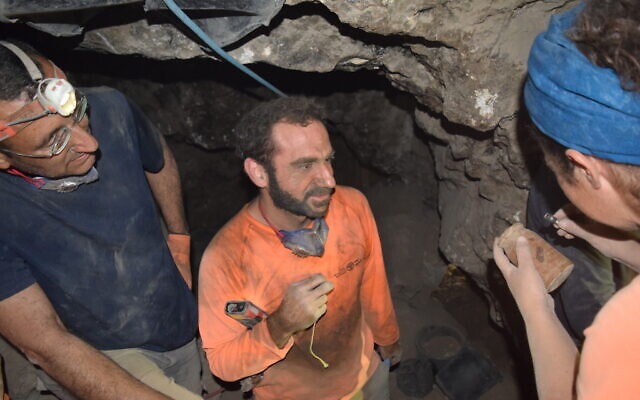 The group examining the 2,200-year-old wooden box discovered in Wadi Muraba‘at near the Dead Sea for the first time, from right to left: Dr. Amir Ganor, Hagay Hamer and Oriah Amichai. (Eitan Klein, Israel Antiquities Authority)
And by potential, Klein is not referring only to the artifacts themselves, but rather to the ability to perform well-documented scientific excavations.

As he noted, these are not the only silver tetradrachmas minted by Ptolemy VI that can be found in Israel today.

“We’ve found in the antiquities market coins of that period, from looters. But now, for the first time in the Land of Israel, we’ve found a trove in a scientific excavation. And therefore, the coins can tell us a story,” said Klein. 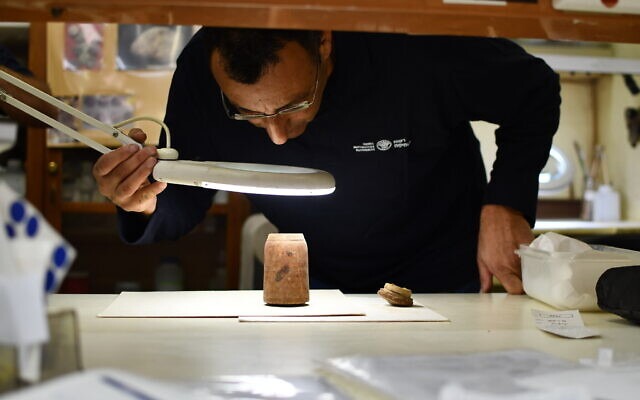 Amir Ganor, director of the Muraba‘at Caves Excavation Project, examines the 2,200-year-old box.(Yoli Schwartz, Israel Antiquities Authority)
The IAA invites the public over age 18 to the caves December 20-28. (Check Facebook for more details.) The coin hoard will be on display in the Hasmonean Museum in Modiin, as part of the “Israel Heritage Week” taking place during Hanukkah.