An ancient mosaic has been uncovered at a seaside villa in Naples, Italy. The Roman emperor Augustus covered over the site in a move that condemned the original owner’s memory. 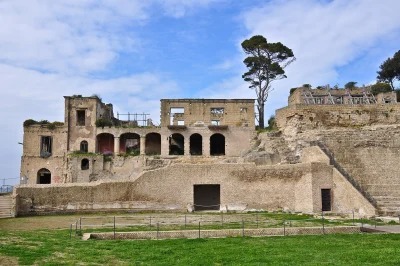 First given the ancient Greek name Pausílypon, meaning “respite from worry,” Posillipo was an elite suburb of Naples during the Roman period. (Because the city’s borders have since changed, it is now sited within present-day Naples.) The coastline along the Bay of Naples was an attractive location for wealthy Romans to build elaborate retreats.

Among them was the Villa of Vedius Pollio, also called the Imperial Villa, which was constructed by the upper-class Roman politician and wine merchant Publius Vedius Pollio during the 1st century BCE. The residence was complete with an odeon and a 2,000-seat Greek-style theater situated on a rocky promontory that overlooks the bay.

A mosaic floor from the villa’s first phase of construction was uncovered by archaeologists from the University of Naples L’Orientale. Beneath renovation works commissioned by Augustus, a carpet of tiny white tesserae encased in a double black frame tesserae, which would have delineated two spaces, was found in part of a large room that overlooked the bay.

“A stratigraphic dating is still missing, but based on the style, the hall could date back to the late Republican age or Augustan at the latest,” said excavation leader Marco Giglio in a release. 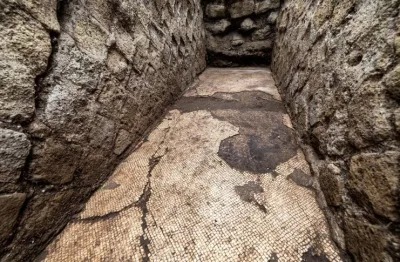 Ancient mosaic uncovered at Villa of Vedius Pollio, Posillipo, Italy.
The son of a freeman, Pollio garnered a reputation for his lavish taste and overwhelming cruelty, particularly to his slaves. On one occasion, Augustus dined at Pollio’s estate and, when a cupbearer broke a crystal glass, Pollio ordered him to be fed to a pool of eels. The slave fell to his knees and pleaded before for the emperor, who ordered the pool to be filled in, all of Pollio’s crystal dishes to be smashed, and the slave to be freed.

When Pollio died in 15 BCE, he bequeathed his estate to Augustus with instructions to erect a monument at the site. Augustus raised a colonnade, known as the Porticus of Livia, which he dedicated to his wife—a kind of damnatio memoriae or a condemnation of memory that attempts to officially erase a person’s existence from known record. The villa was passed down to every emperor until the reign of Hadrian, who died in 138 CE, as an imperial property.