Royal Roman ruins go back to age of myth

Archaeologists have found evidence that a royal palace existed in the time and the place for Rome’s mythological founding, back in 753 B.C.

Ruins from antiquity rise from the Roman Forum. An archaeologist who has been conducting excavations at the Forum for more than 20 years says he has found traces of a royal palace dating back to 8th century B.C.Andrew Medichini / AP 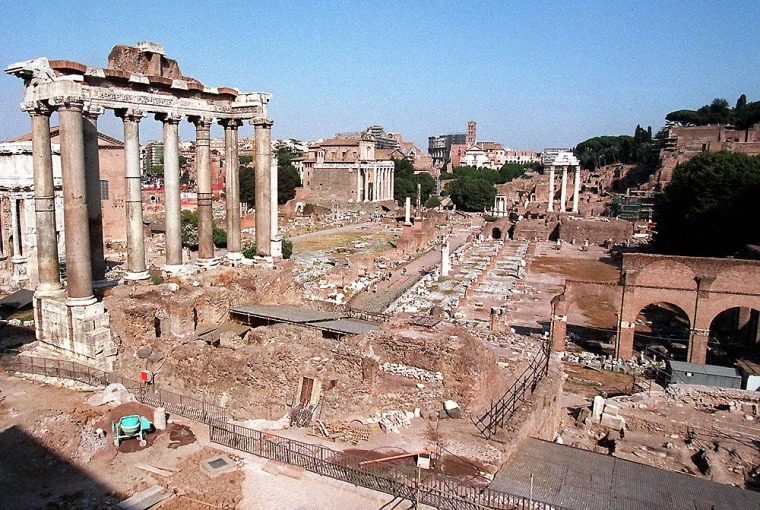 Legend has it that Rome was founded in 753 B.C. by Romulus and Remus, the twin sons of Mars, the god of war, who were suckled as infants by a she-wolf in the woods.

Now, archaeologists believe they have found evidence that at least the time frame for that tale may be true: Traces of a royal palace discovered in the Roman Forum have been dated to roughly the period of the eternal city’s legendary foundation.

Andrea Carandini, a professor of archaeology at Rome’s Sapienza University who has been conducting excavations at the Forum for more than 20 years, said he made the discovery over the past month at the spot where the Temple of Romulus stands today.

It is next to the Sanctuary of Vesta — the Roman goddess of the hearth — just outside the Palatine walls, site of the earliest traces of civilization in Rome.

A space of regal splendor
Where previously archaeologists had only found huts dating to the 8th century B.C., Carandini and his team unearthed traces of regal splendor: A 3,700-square-foot (344-square-meter) palace, 1,130 square feet (105 square meters) of which were covered and the rest courtyard. There was a monumental entrance, and elaborate furnishings and ceramics.

The walls were made of wood and clay, with a floor of wood shavings and pressed turf. It was tests on the clay that allowed the archaeologists to confirm the age of the find.

“It could be nothing other than the royal palace,” he said, adding that during that period the average abode was about one-tenth the size.

Carandini also found a hut where vestal virgins are believed to have lit a sacred flame.

Story supported by authorities
Eugenio La Rocca, the superintendent for monuments for the city of Rome, said Carandini’s interpretation of the ruins appears to be accurate.

“It seems to me that what is emerging from the excavation of Carandini, who can be considered the highest authority in this field, is a very coherent archaeological reading,” La Rocca told the newspaper Il Messaggero.

“Whoever created the legend did so with the knowledge that behind it there was a historical foundation,” he told the newspaper. “That doesn’t mean the story of Romulus and Remus necessarily happened that way, but only that memory as it was handed down by the majority of the Latin writers is much more than a hypothesis.”

Recounting the founding myth
In Rome’s founding myth, the daughter of a king deposed by his brother was forced to become a vestal virgin to prevent her from having children. But Rhea Silvia became pregnant with sons of the god Mars.

When the infants were discovered, the princess was imprisoned and the babies were set adrift in a basket on the Tiber River — which today winds its way through Rome.

The twins floated ashore safely and were suckled by a she-wolf until they were rescued by a shepherd, who raised them.

When they learned the story of their past, they killed the usurper Amulius, restored Rhea Silvia’s father — Numitor — to the throne, and set off to found a city on the site where they were taken care of by the wolf.

The image of the two naked babies looking up to drink the milk of the she-wolf became a recurrent theme in Roman art, and sculptures of the scene are scattered around museums throughout the nation.

While there is little evidence of the historical existence of twins called Romulus and Remus who founded Rome, the discovery of the palace offers tantalizing indications the legend had roots in fact.

Carandini began his career as an art historian before becoming involved in archaeological digs.