Archaeologists excavating near London Bridge have discovered the largest Roman mosaic to have been unearthed in 50 years. Dating back to the Roman period when the city was called Londinium, it was in the shadow of the Shard skyscraper that archaeologists made what they are calling a “once-in-a-lifetime” discovery. A report in The Guardian says the mosaic served as a floor inside a triclinium, which was a venue for high-ranking Roman officials to enjoy luxury foods and drinks while chilling on lavish furniture. 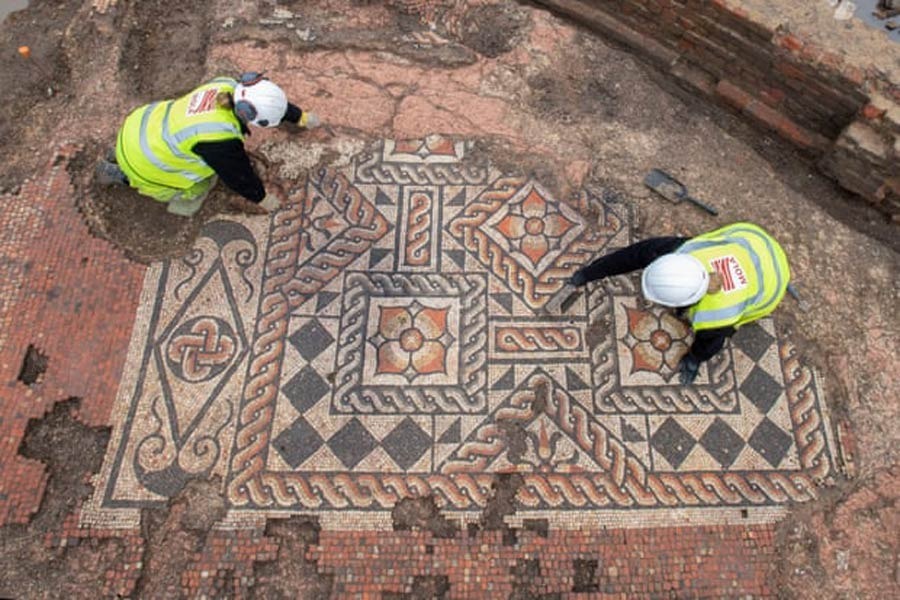 The site where the Roman mosaic was discovered in London is located near the Shard skyscraper. (Andy Choppin / MOLA)

When the Romans invaded England in 43 AD they first landed on the south coast of Kent. From here they sailed up the River Thames and built a settlement and bridge on the north bank where the waterway became narrower. Today this is the site of the city’s iconic London Bridge. Having created a port, a network of paved streets and lush stone buildings with mosaic floors they named the settlement Londinium, which would later serve as the administrative capital of Britannia, the Roman name for Britain. 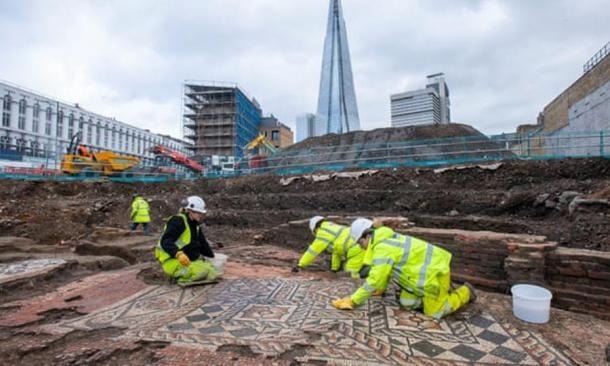 The site is located near the Shard (also referred to as the Shard of Glass), a 72-storey skyscraper that was designed by the Italian architect Renzo Piano in Southwark, London. It is thought to have been a staging post for travelers entering or leaving Roman London on the north side of the Thames.

Antonietta Lerz, of the Museum of London Archaeology (MOLA) said the mosaic, which measures eight meters (26 ft) long, was constructed during the late second century to the early third century AD. The flowers and geometric patterns on the London mosaic are all still intact and they will be lifted later this year to be preserved, and will eventually be exhibited to the public in London. 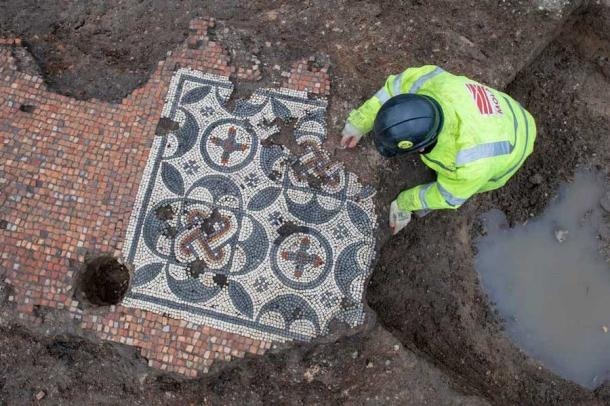 David Neal is an expert in Roman mosaics . According to Archaeology News Network , Neal said the design of the larger panel was created by a highly-skilled team of mosaicists known as the Acanthus. Colorful flowers surrounded by twisted-rope designs are set within a red tessellated floor. Opus tessellatum , in case you are struggling, is the act of covering any surface with a pattern of repeated shapes that fit together without any overlapping or gaps.

The triclinium is thought to have belonged to a Roman mansio and the mosaic was located centrally within a large complex around a central courtyard. In the Roman Empire, a mansio (place to stay) was an official lodging on a Roman road that was managed by the central government for the use of state officials while travelling to and from Londinium.

Apart from this large Roman mosaic discovered in London , a second large Roman building was unearthed nearby the first in which “lavishly painted walls, terrazzo and mosaic floors , coins and jewelry” were found. A decorated bronze brooch, a bone hairpin and a sewing needle all informed the MOLA archaeologists that this was the private residence of a wealthy individual or family. Lerz said all of these finds belonged to “high-status women” who were apparently adhering to the latest “fashions and hairstyles.” 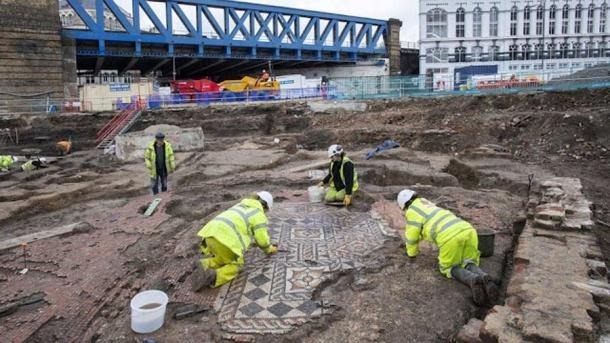 The mosaic is thought to have been the floor of a large dining room, which the Romans called a triclinium, in ancient Roman Londinium. (Andy Choppin / MOLA)

Lers continued to explain that the mosaic was created in “the heyday of Roman London when people were living the good life.” The mosaic was created 200 years after the famous 61 AD uprising of the Iceni tribe , led by Queen Boudicca , which burnt Londinium to the ground resulting in the death of 30,000 Londoners. According to Project Britain , with the rebellion quashed Londinium was rebuilt over the next two decades and the population rocketed up to 60,000.

For the next 300 years Londinium represented the largest city in the Roman outpost of Britannia. The main fort was located where the Barbican Center now stands, and a forum (market) and amphitheater are still buried below the Guildhall and Basilica (business center). But perhaps the Romans greatest architectural achievement was the huge defensive wall they erected around the entire city, to protect the high class elites from further native invasions while they ate and drank the spoils of their invasion.