A view of the vale of Sparta from Mistra.
Mistra, the Byzantine capital of the Peloponnese, is the most exquisitely beautiful of places, an unforgettable combination of peerless art and important Medieval architecture that induced Steven Runciman, the most romantic of modern historians, to rhapsody: ‘The beauty of Greece lies mainly in contrast, the contrast between stark promontories and blue sea-gulfs and between barren mountain-sides and fertile valleys. Nowhere is the contrast more marked than in the vale of Sparta, Lacedaemon, the “hollow land” of the Homeric age.’

On Easter Sunday, as spring comes to the abandoned town, Mistra is ravishing. Located on a sharp pyramidal hill, a wedge standing out from the snow-capped Taygetus mountains, 8km (5 miles) west of Sparta, the ruins are drenched in wild flowers. Here, history is resplendent too. After all, Helen was queen of this vale before fleeing Menelaus’s palace for Troy. Yet her story, for all its timeless simplicity, and much as it might seem preposterous to contemplate, is dwarfed by the expected glories of this lost hill town where Byzantium made its last abortive stand.

Mistra was a great capital for little more than the blink of an eye in terms of great civilisations. At its zenith it had 20,000 inhabitants with populous tumbling hillside suburbs beyond its walls. It began, though, as no more than a formidable castle, a serendipitous outcome of the infamous Fourth Crusade of 1204, when a combination of dissolute Franks and Venetians captured Constantinople, ousted the Byzantine Emperor, and wantonly divided up the territorial spoils.

ottoman-fountain
An Ottoman fountain on a cobbled street in the lower town. 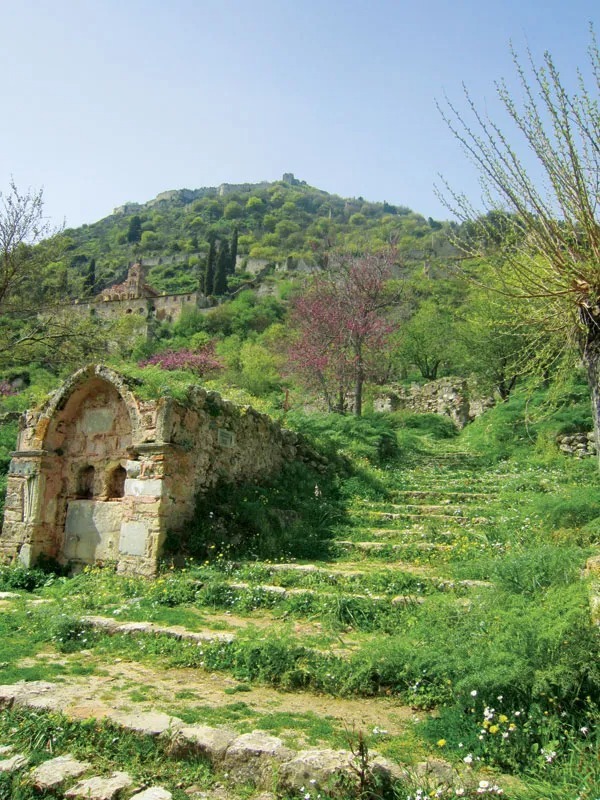 Glittering history
The Peloponnese, with its heartland at Sparta, was won by the self-regarding Villehardouins from Burgundy. In the footsteps of Menelaus, close to ancient Sparta, they made a home at a palace known as La Crémonie. Forty turbulent years passed before William of Villehardouin, scion of the third generation, born in these parts, felt compelled to defend his slice of paradise from the untamed hill tribes in the towering Taygetus mountains. Choosing an uninhabited conical hill known as Myzithra, by 1249 he had erected a great castle that soared intimidatingly above the pastoral valley below. The upstart Villehardouins lasted only a mere dozen years more before the ousted Emperor, Michael Palaeologus, reasserted Byzantine supremacy and effectively ended the Latin adventure in Greece.

At first, the Emperor, known by the title of Despot, was most interested in the palace in the Spartan vale. But his liberated Greek citizens, without fanfares, migrated to the steep hill slope below the fortress of Mistra. Water was plentiful and the place was airier than the plain. Soon, the orthodox bishop joined them, and within two decades a new city had discretely taken shape. Keeping track of what happened next in this idyllic spot is unnecessary, as emperor followed emperor, and usurper after usurper preyed on the political direction of Mistra. Suffice to say that by the early 15th century it had become the cultural capital of the Greek world.

Thanks, however, to many arranged marriages with Latin princesses, Byzantium and the Latin West found commonality in the creative arts and philosophy. How Mistra’s artists were able to convey such sublime serenity despite the perpetual political turmoil is a mystery. This erudite world famously came to a cataclysmic end on 29 May 1453, when Sultan Mehmet II conquered Constantinople. Seven years later to the day, the Sultan’s army arrived in front of Mistra. The Despot Demetrius confronted reality quickly, surrendered meekly, and the next four centuries of this town followed a different, provincial course.

The Ottomans treated Mistra with respect until, in 1824, Greek insurgents challenged the murderous Ibrahim, pasha of the Morea. ‘I will not cease till the Morea be a ruin,’ Ibrahim informed a British government official, and indeed, after unspeakable atrocities, Mistra was abandoned to archaeology. Today it is a UNESCO World Heritage Site inhabited by a few shy nuns with their cats in the mid-slope convent
of Pantanassa.

Flowers and frescoes
Mistra comprises three distinct parts: the Frankish citadel on the summit of the hill, the walled kastron in which the Palace of Despots is to be found, and the walled town itself, known as the mesochora. On Easter Sunday, I visited only a small part, relishing the prospect of a return visit to see more. Entering the town from the unpretentious main gate to the lower town, I ambled along the cobbled streets to the Peribleptos, then climbed the winding way up to the convent of Pantasassa, before shimmying along the streets to the Palace of the Despots, from where I bowled down to the cathedral of St Demetrios, with its associated museum.

St-Demetrios
The cloisters of the Cathedral of St Demetrios, also known as the Metropolis
With a cloudless sky, the bright sunshine turned the carpets of flowers into a bedazzling radiance that meant I had to concentrate to make sense of the urban dereliction – its noble houses jostling with shops, diminutive chapels, fountains, and much besides.

Tucked in the far lower corner of the town is the Monastery of the Peribleptos. The church is half concealed in a cave, deceptively larger than you initially believe it to be. If Mistra was only this church, it would merit world heritage status. Dedicated in about 1358 to the Virgin in the time of the Despot Manuel Cantacuzenus, it is an inestimable treat on a par with Giotto’s Assisi or, frankly, the Sistine Chapel. Much of the main church is covered in frescoes, numerous scenes conveying an austere dignity to figures whose soft outlines allow them almost to float. 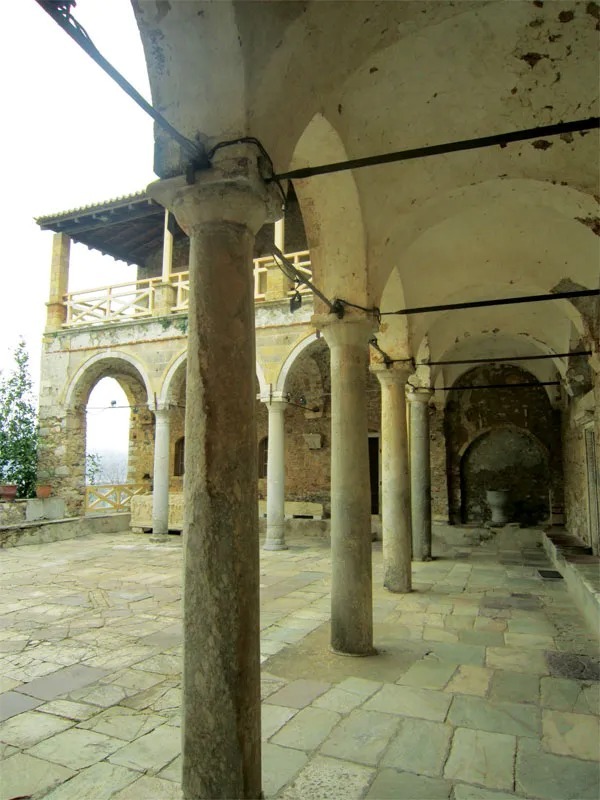 A combination of powdery and darker hues of blue figure prominently in illuminating the rich iconographic programmes miraculously surviving on just about every wall. Reigning supreme in the dome, of course, is a luminous Christ as Pantocrator. But feast your eyes on Christ’s entry into a crowded Jerusalem, and the diaphanously dressed priests and angels in heavenly conclave. A metropolitan artist has brought vivid harmony to the incalculable number of light, slender figures. In dazzling scenes, four or more painters have conjured up the authority of Byzantium in its final age. There is both a solemnity to the philosophy and a graceful expressiveness, idioms that were soon to be hallmarks of the early Renaissance in Italian cities.

There is no press of tourists jostling to enter this great church. For a moment, staring at the majestic paintings, you catch yourself wondering how this could be. Count your blessings, take a deep breath and then set your sights on the Pantanassa, and the far beacon of its red-tiled domes.

A grand seclusion
The jumble of roofless houses along the alleyways includes the grand Phrangopoulos House. A quintessential minor Medieval noble’s house, the picture windows on its first-floor hall – the triclinium – take in the sweep of the vale below. Its vaulted undercroft was once used for storage and stabling. A grander version of this, the House of Lascaris, occupied the mid-slope below. A verandah beyond the triclinium undoubtedly offered an unparalleled spot for cocktails and seasonal dining.

The cats in the Pantanassa look old and thin. They stare with motionless disinterest as you emerge into the convent. Unlike the sumptuous feast of unkempt flowers and grasses beyond the convent’s walls, this is an oasis of order. A nun peeked out and, like her cats, showed no interest. Above her dormitory on an elevated terrace stands a three-aisled basilica with its two-storey entrance hall and its picture-book belfry. It is a solid Gothic church, with discrete ornamental sculptured carvings and a well-tempered use of tiles to lend it colour as well as protection against earthquakes. The paintings of this last great architectural achievement of the Byzantines – an inscription records its construction in 1428 – are astonishingly well preserved for a building that has remained in constant use for six centuries. The rich cycle of frescoes are less expressive than those of the Peribleptos, but nevertheless powerful proclamations of the last days of empire. Rich in detail, there is still a strong use of light colours that give an urgency and expressiveness to scenes like the Annunciation of the Virgin and, again, the Entry into a Jerusalem (the walled city perhaps being Mistra itself). 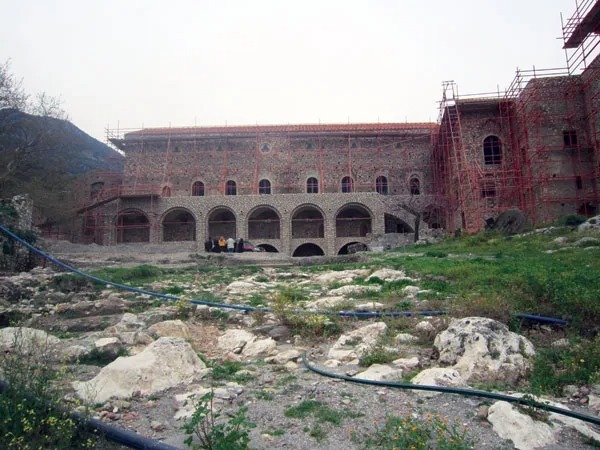 The Palace of the Despots, undergoing renovation (or rebuilding).
Up higher, passing through the unpropitious Monemvasia Gate lies the Palace of the Despots. It is roped off because, notwithstanding the Euro crisis, the crazy authorities are re-building it! The elegant building forms an ‘L’ around a courtyard. Dating from the mid-13th century, it is made up of a series of successive halls, the loftiest being four storeys high. It is modelled upon the Palace of the Porphyrogennetos in Constantinople, and is a harbinger of the palaces that dominate Italy’s renaissance piazzas. As if to compound my dismay, believe it or not, a Mercedes had somehow brought a grandee to see the work-in-progress. If the Despots were still alive, would they be doing the same, I wondered: an insensitive challenge to European best practice in conservation for the benefit of some oligarch or other with pennies to spend? 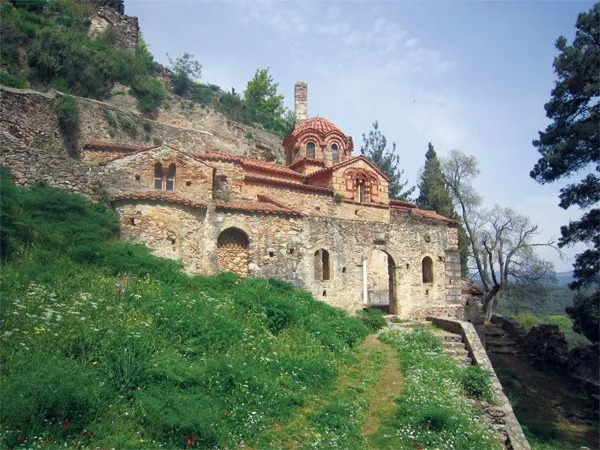 View of the Peribleptos
Medieval splendour
I weaved my way down the cobbled streets, trying to put this aberrant encounter out of my mind. Close to the lower entrance is the multi-domed cathedral dedicated to St Demetrios, known as the Metropolis. It survived in use until the advent of the infamous Ibrahim Pasha, and, like any great town’s cathedral, is a chronicle in stone and imagery to Mistra’s episodic history. The light and airy portico-ed courtyard invitingly entices one into the sombre church. Again, there is a feast of 13th-century paintings, defined by their clear and peaceful narration. In the floor of the nave is a marble slab decorated with the twin-headed eagle of the Despots. Its survival after centuries of turmoil is perhaps a miracle secured by the awe invoked by its majestic setting.

Overlooking the courtyard is a dinky museum, illuminated by sultry lighting, with clothing, jewellery found in burials, and a lapidary section. Wholly underwhelmed, I ambled on, determined to carry with me to my Easter lunch the rhapsodic congregation of painted diaphanous figures from the Peribleptos, mixed with Mistra’s flora. Towering over ancient Sparta and its vale, the Medieval imagination is here unleashed in all its glory, conveying the final creative triumph of Byzantium on the eve of the Renaissance.