Pakistan’s 5,000-year-old ‘Mound of Dead’ in peril after floods 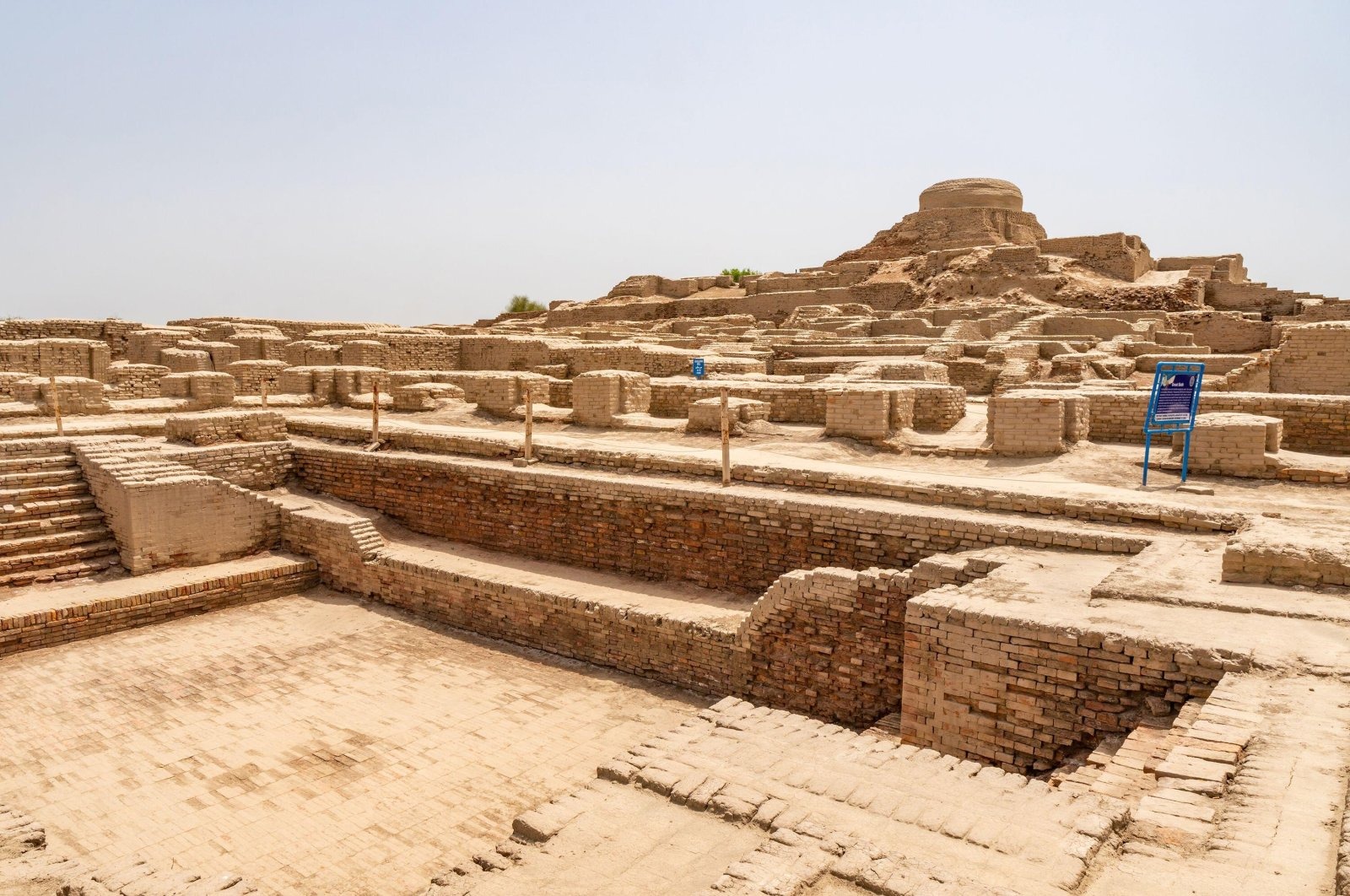 Dampness is still visible in the bases of walls and the main stupa at Mohenjo-daro where curators are busy restoring the walls of several prehistoric cells through “original technique and likewise materials” to save the remnants from further erosion, bulging and tilting.

Mohenjo-daro, also known as the “Mound of the Dead,” is located 27 kilometers (about 17 miles) from the Larkana district in the southern Sindh province.

The floodwaters surrounding the iconic site have damaged several excavated portions, with water seeping through and creating furrows.

Rain and floodwaters seeping into the ground have tilted the walls of the heritage site’s prehistoric houses, which date back to 2,500 B.C. and are the last surviving remnants of the Indus Valley Civilization.

The alarming development, according to archaeologists, could potentially lead to the walls completely collapsing.

The ongoing restoration work includes mud-capping of the tops of the affected walls, and filling of cracks in their lower portions and bases, apart from filling with mud bricks of the gullies caused by rainwaters gushing down the mounds.

“Currently, we are focusing to arrest two major issues. First, to contain the mortar erosion caused by the rainwater that penetrated the walls of the (pre-historic) cells and base of the main stupa (standing in the middle of remnants),” said Ali Hyder Gadhai, an assistant archaeological engineer, who is supervising the restoration work.

Secondly, he told Anadolu Agency (AA), the eastern wall of “the Great Bath,” a vast bathing area on the northern side of the main stupa, which collapsed during the recent rains, has been restored.

At present, he further said, the epicenter of the ongoing restoration exercise is the second century B.C. “Citadel area,” which consists of the prehistoric cells, which would serve as housing for monks, the Great Bath, the main stupa and other remnants.

The drum of the main stupa, which was a proper dome centuries ago, has been covered by the geotextile (waterproof covering), he added. 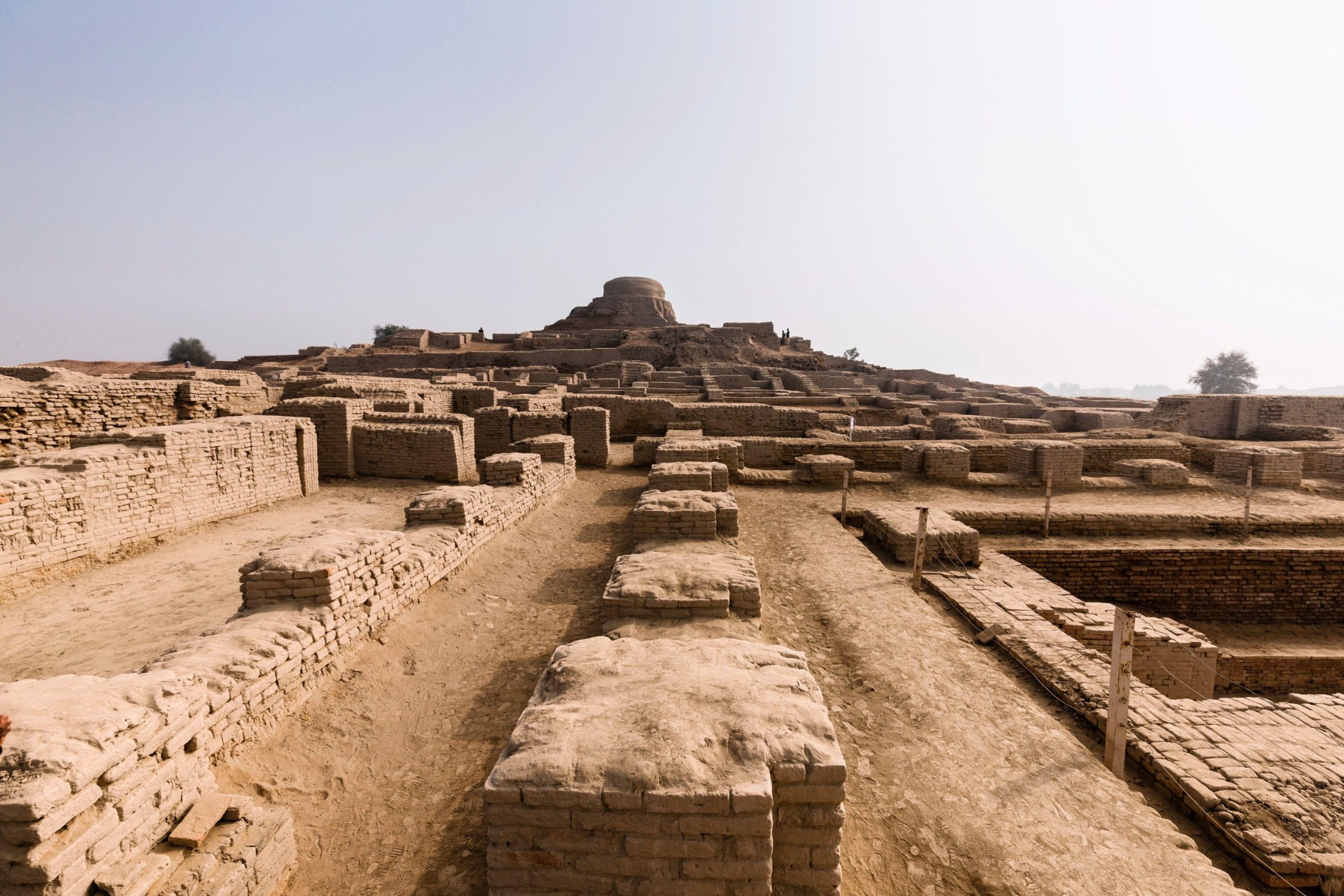 UNESCO World Heritage Site Mohenjo-daro, in Larkana, Sindh, Pakistan, Jan. 1, 2017. (Reuters Photo)
Further restoration will take time
Aggravated by the recent rains and “surface” flooding, erosion of the foundation of the main stupa, which stands 70 feet (21 meters) high from the ground, could be spotted through the naked eye.

Gadhai, nonetheless, opined that only those parts of the foundation, which were hit by the surface flooding, have gone softer.

The erosion, he said, is being contained through shoring and wall-buttressing, whereas the badly-hit parts are being “underpinned” by the same kind of bricks.

To contain the dampness, he went on to say, brushing off the foundation surface is being carried out.

The pointing work will begin once the base and the walls are fully dried, whereas work on already dried portions will begin in March amid a dwindling dew factor.

Gadhai, however, acknowledged that the dampness could take another six to 12 months to completely go away.

“Although we plan to commence pointing work from April next year, we are not pretty sure about that as some portions of the base and the walls, particularly the northern side, do not receive direct or enough sunlight throughout the year,” he maintained.

The curators, nevertheless, have not so far adopted any artificial heating technique to dry the wetness.

Also, they are awaiting the release of funds, estimated between 30 and 40 million rupees ($136,856 to $182,477), to begin restoration work of other portions of the spectacular site.

‘Winters not good for restoration’
Rooh-ul-Amin, a curator involved in the restoration exercise, reckoned that dew will slow down the mud-capping work in winter, which is barely a few weeks away.

The dew, he added, doesn’t allow the mud to dry easily.

Also, he further said, the volume of sodium chloride (salt) – technically described as mirability – shoots up to 300% at below 30 degrees Celsius (86 degrees Fahrenheit), which increases the erosion of walls and bases, aside from causing chipping and flaking to bricks.

To control the phenomenon, he said, a mud-plating technique is applied to desalinate the bricks.

Moreover, Gadhai added, soil stabilization of the flooring is an annual affair.

Only 10% excavated
The marvelous Mohenjo-daro was discovered by the legendary British archeologist, Sir John Marshall, in 1922.

Being the director general of the Archeological Survey of India (from 1902 to 1928), he oversaw the excavations of Mohenjo-daro and Harappa, the two main cities that comprise the Indus Valley Civilization.

Archaeologists have so far been able to excavate only 10% of the site sprawling over 750 acres.

“We have so far excavated only 40 acres of the Mohenjo-daro, with the last major excavation carried out during the British colonial period,” according to Gadhai.

Archaeologists and historians stand divided on what religion the people of Mohenjo-daro would follow.

The presence of the Great Bath, according to one version, suggests that they were water worshipers.

Another version argues that the inhabitants of Mohenjo-daro were idol worshipers, who were overpowered by militarily-advanced Aryans.

Experts are still groping in dark to decipher the writings engraved on tablets (seals), which have been excavated from Mohenjo-daro.

“We really don’t know what wonders this magnificent site has in stock for us,” he said.