Working now in the lab conditions, scientists have opened the 2,000-year-old coffin thought to belong to Liu He, the Marquis of Haihun.

The remains of the “Marquis of Haihun” were found in a coffin from a 2,000-year-old tomb that historians have thought to be his last resting place since the site was discovered near Nanchang, five years ago, reports China Daily.

Archaeologists recently have found the teeth of Liu He, the controversial Chinese emperor who was deposed and stripped of his nobility after just 27 days in office, but later made a marquis.

The coffin was hoisted out in January and taken to a lab for examination. A seal inside the coffin bore the characters for Liu He, the marquis’ name, helped confirm his identity. Earlier, excavators had found another seal with the characters for “Seal of Master Liu,” and his identity was also confirmed by inscriptions on gold coins and bamboo slips found inside the tomb.

Progress of the tomb’s cleaning up has been under the spotlight since it is the best-preserved tomb of its age found in China, and the condition of the remains of the head has not been revealed earlier.

The cause of Liu’s death may be uncovered following a DNA test, said Yang Jun, researcher at the Archaeological Research Institute of Jiangxi Province.

Liu He was the grandson of Emperor Wu of Western Han Dynasty (BC 2002-AD 8) whose reign ushered in one of the most prosperous periods in Chinese history. Historical records say that Liu was born in 92 BC. He became the Prince of Changyi (in today’s Shandong Province) at the age of five, when his father died. 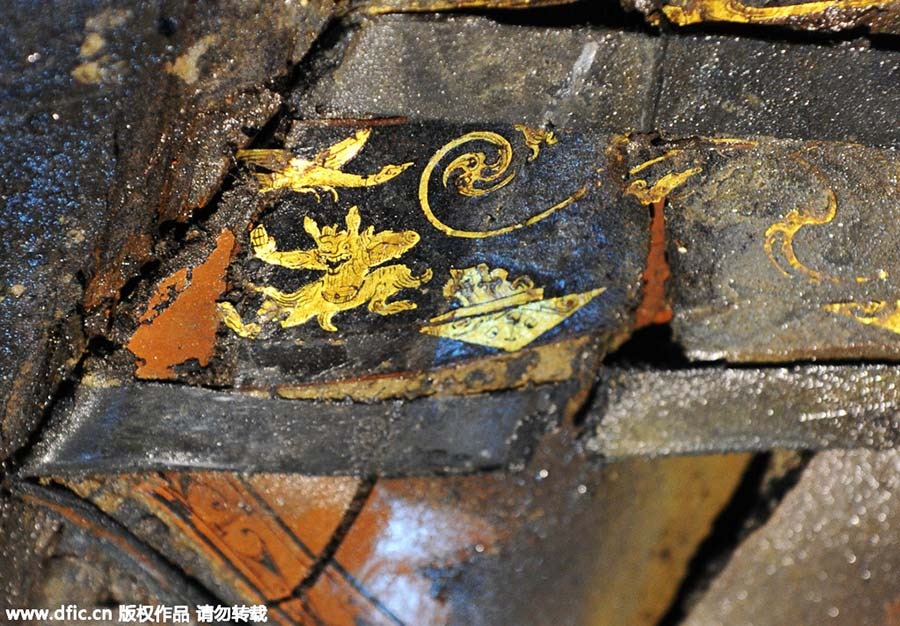 He was given the role of emperor in 74 BC, after his uncle, Emperor Zhao, died without an heir. Liu’s rise to power may have been swift, but his demise was even swifter. Accusing Liu of incompetence, the royal clan worked with powerful officials to banish him to his former residence in Changyi to live as a commoner.

Several years later Liu was made the Marquis of Haihun, and he died in less than five years. Chinese history looked unkindly on Liu for long, but his tomb’s excavation seems to help support a reassessment.

The new discovery from the remains of the “Marquis of Haihun” may help uncover the marquis’s mystery of death, said experts attending an international archaeological symposium in Nanchang, capital of Jiangxi province.