Skip to content
Posted By el Toro Posted On September 7

“My fleet sailed from the mouth of the Rhine eastward as far as the lands of the Cimbri to which, up to that time, no Roman had ever penetrated either by land or by sea, and the Cimbri and Charydes and Semnones and other peoples of the Germans of that same region through their envoys sought my friendship and that of the Roman people.” Res Gestae 26.

In a single sentence, the first Roman Emperor unknowingly immortalizes some of the earliest known interactions between his Empire and the “barbaric” regions of the far north. Augustus’ Res Gestae provides evidence that, while the Romans did not conquer the regions north of Britain (nor did they conquer Britain), Rome still reached for it. Tiberius’ attempt is quoted above (prior to his succession as emperor) amd ancient historians reference this and other attempts to approach the North. In tandem with discoveries of Roman coinage at Scandinavian sites, these references provide an interesting approach to a possible relationship long lost to history.

Roman Trade with the Norsemen

One of the earliest known interactions between the pre-Christian Norsemen and Roman Empire was based on trade. The Amber Trade is documented by ancient historians Tacitus and Pliny the Elder, who indicated this trade lasted (at least) from the early Empire well into the 400s AD. As countries were not defined in the ancient world as they are now, one must be careful determining whether the “north” and “northern tribes” mentioned by the authors extends as far as modern Scandinavia—i.e., Denmark (where most finds are concentrated), Sweden, and Norway. Pliny is thought to most explicitly discuss Roman-Scandinavian interactions, presuming Scandinavia was later named after his references to the peninsula of ” Scandia” or ” Scandi”.

It can be deduced that Roman coinage was likely circulated during these trade relations, though not necessarily intentionally. Romans coins would not have held monetary value in the currency system of the northern tribes. In Scandinavia, bartering was still the common form of exchange, so coins were rather useless as payment. The Roman coins discovered in Scandinavia are therefore believed to have entered the northern regions in a couple different ways. The first—and most evident—is that a Roman solider or trader merely dropped some of his salary by accident, either in the North itself or in a location where Scandinavian soldiers might have found and picked up the piece; another consideration is the use of these imperial coins as gifts of good faith from the Empire to northern leaders. 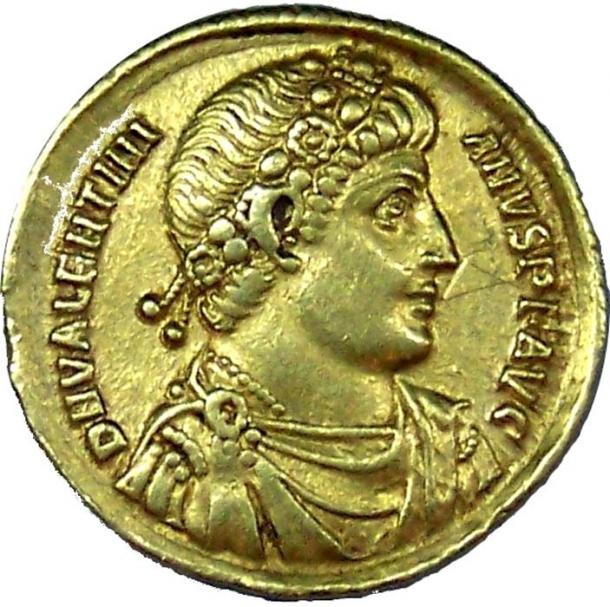 Example of a Roman gold coin. This specific coin is part of the Roman collection at the Yorkshire Museum. ( CC BY SA 3.0 )

Scholar Thomas Green (2007) investigates Roman imports as symbols of power to elite Scandinavian leaders. Any Roman items that entered the region of a particular tribe indicated a good relationship between the tribe’s chief and the Emperor, thereby boosting the status of the leader. It has been postulated that the number of Roman coins in a region is equivalent to the level of prestige individual chieftains could boast. Though Scandinavia was outside the reach of Rome’s arm, the emperor was likely still seen as a very important, and perhaps even a god-like, figure to the tribes who only knew the leader of the west through depictions on coins (and Roman bracteates and medallions) of a man in semi-divine forms. Though unseen by the North, the images spoke volumes, and the people of the North found their own reasons to value the coinage from the Empire.

The Hoby beakers/chalices/cups of silver from the Roman Iron Age. Marked with the Roman name Silius and the name of the artist. Found in Hoby, Lolland, Denmark in 1920. (Leif Plith, Museum Lolland-Falster/ CC BY SA 4.0 )

In fact, it eventually became traditional for Roman coins to be worn as prestige ornaments. While the Roman Emperor had little sway in the farthest reaches of the North, the Empire itself was recognized as a fierce power, led by a man to whom Scandinavians would easily have attributed the status of demi-god. The people of Scandinavia would have readily accepted the Roman Emperor as a “leader-god” based on their cultural beliefs and readiness to incorporate from other religions. In Norse mythos, the gods were mortal, their lifetimes were extended due to the consumption of certain fruit, and much of their power stemmed from their relationships with human warriors who would one day fight alongside them in the final battle, Ragnarök. A human leader with as much power as the Roman Emperor appeared to possess (from such a great distance, no less) would have fit quite neatly into their belief system. A trinket from such a leader would have spoken volumes among the northern tribes.

Evidence shows that tribesmen would forge a small loop in the metal, through which scholars postulate a small rope was threaded so the coin could be worn as a necklace or bracelet. This theory also helps explain why discoveries of Roman coins are concentrated in particular areas. Because coins were not used in the exchange system of the North, the coins rarely changed hands outside of the tribe who first received it. Though a leader could pass a Roman coin to a loyal man in his community, these coins were not freely passed from one tribe to the next. The prestige of the Empire associated with the coin was too valuable to use for such a mundane purpose.

Bronze follis of Constantine the Great, 332-333 AD. Note how this coin was carefully holed in a way that would not damage the designs. ( forumancientcoins)

The influx of Roman coins in certain areas of Scandinavia, most evidently Denmark, indicates the likelihood of a relationship between the two cultures – however minimal. While the evidence cannot yet clearly determine whether that relationship was political or merely based on trade, the overwhelming number of coins uncovered in Scandinavian soil provides a stepping stone for future research. Continuous discovery of Latin inscriptions and fragmentary documents may one day improve upon Tacitus and Pliny’s descriptions of Scandia and the northern tribes, thus providing further possible explanations from the Roman coinage that has been buried for two millennia.