Two amateur free divers have found one of the largest collections of Roman coins in Europe off the east coast of Spain. 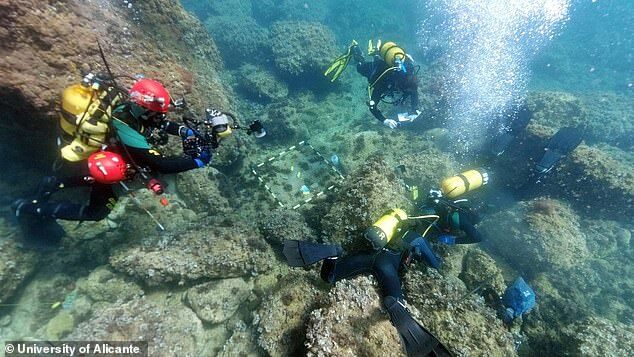 Thought to have been hidden from barbarian invaders around 1,500 years ago, the stash was discovered by two brothers-in-law cleaning rubbish from the seabed in Alicante.

Despite lying on the seabed since the late 4th and early 5th century, the 53 intact gold coins are said to be in ‘a perfect state of conservation’ enabling researchers to read inscriptions and identify Roman emperors.

Jaime Molina from the University of Alicante said: ‘This is one of the largest sets of Roman gold coins found in Spain and Europe. 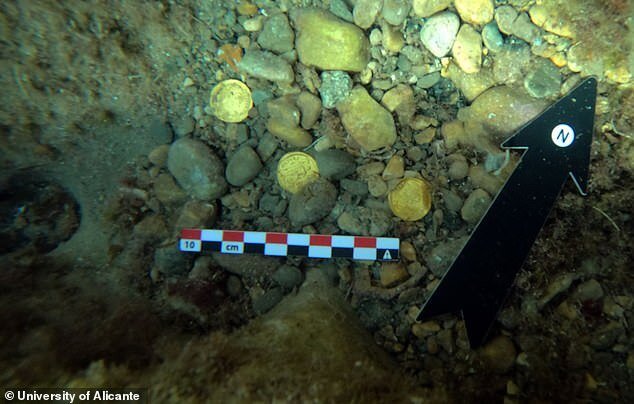 Thought to have been hidden from barbarian invaders around 1,500 years ago, the stash was discovered by two brothers-in-law cleaning rubbish from the seabed in Alicante

‘It’s an exceptional archaeological and historical find since its investigation can offer a wealth of new information to understand the final phase of the fall of the Western Roman Empire.’Brother-in-laws Luis Lens and César Gimeno came across the extraordinary discovery seven metres deep off the coastal town of Xàbia.

Lens told local media: ‘I thought I had found what looked like a 10 cent coin.

‘It was in a small hole, like a bottleneck.’

But after returning to his boat he took a closer look and discovered ‘an ancient image, like a Greek or Roman face’ and thought it was a lost gem.

The two brothers-in-law then returned to the site and using a corkscrew and Swiss Army knife spent two hours digging up the rest of the treasure. 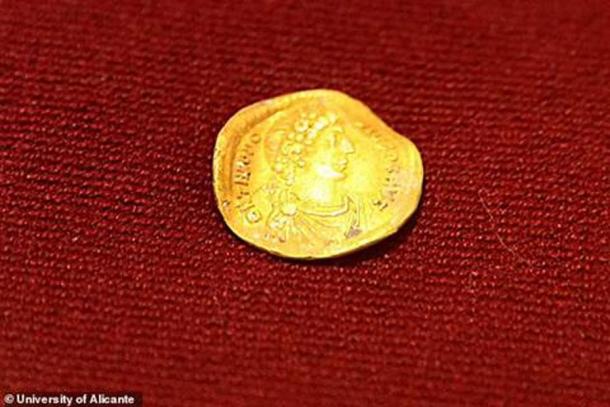 One of the coins, depicting the Roman Emperor Honorius.

Molina said: ‘There are no remains of sunken ships in the area where they were found so it is probably a voluntary concealment from the arrival of the barbarians to the coast of Hispania, in this case, the Alans.’

He added: ‘This finding speaks to us of a context of fear, of a world that is ending, that of the Roman Empire.

‘The find illustrates a historical moment of extreme insecurity with the violent arrival in Spain of the barbarian peoples and the definitive end of the Roman Empire in the Iberian peninsula from 409 AD.’

The coins will now be cleaned up and exhibited at a local museum.

The bay of Portitxol in Xàbia is an area well known for the abundance of underwater archaeological remains.