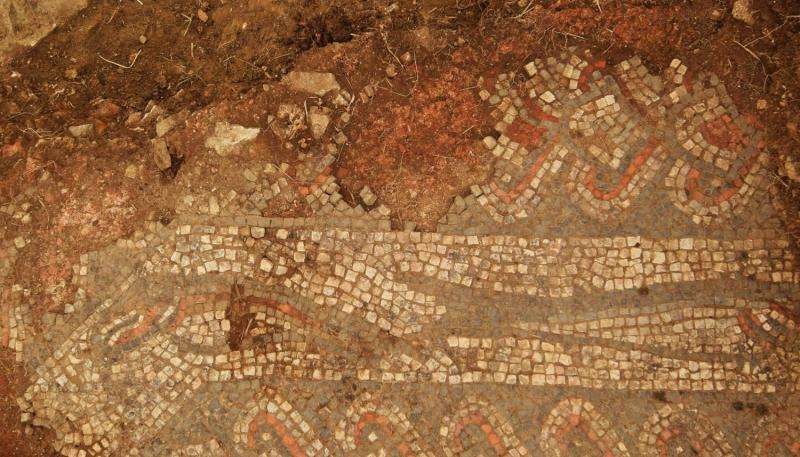 The dig at the fourth century site in Lufton, Somerset, has investigated a part of the mosaic that was damaged in antiquity. First excavated by Leonard Hayward Fellow of the Society of Antiquaries (FSA) in the late 1940s, it was thought to depict twenty nine fish. However, the latest excavation has demonstrated that not only are the details of one of the fish incorrectly recorded, but that the tip of a thirtieth fish survives.

The octagonal bath area of the structure, with a deep pool surrounded by the mosaic has previously been variously interpreted as an ostentatious bath, a precociously early Christian baptistery or an impressive component of a suite of high status reception rooms.

Dr James Gerrard, senior lecturer in Roman Archaeology at Newcastle University, says: “A two week excavation is a short period of time. The team have worked really hard and revealed fascinating new evidence about one of Roman Britain’s famous fourth-century villas. This just goes to show that even well-known sites still have secrets to give up.”

The team of eight students and the South Somerset Archaeological Research Group, led by Dr Gerrard and Andrew Agate from the School of History, Classics and Archaeology at Newcastle University, also investigated archaeological deposits external to the building and one of the substantial buttresses added to the octagonal bath area of the villa. Finds include quantities of pottery, fifteen late Roman coins and significant quantities of building materials.

Last summer, Dr Gerrard led a team of 20 students at the site, and they undertook the first excavation of the villa since the 1960s, when Leonard Hayward carried out early investigative work there. He took his grammar school pupils to the site in his Morris Traveller and they helped him excavate this nationally important building.

The 2016 excavation has shed new light on the lives of the people who lived at the villa. They ate shellfish, including oysters from Poole Harbour region – even though Lufton is quite far away from the sea. They also found the bones of sheep, cattle and pigs, mallard (ducks), doves, and chickens. Less welcome visitors to the villa were mice, voles and crows.

The residents used pottery from Black Burnished kilns in Poole Harbour as well as finer pottery from Oxfordshire and the New Forest. More personal objects include a lady’s bone hairpin and tiny glass beads from a necklace.

Lufton Roman villa is a scheduled ancient monument owned by James Pullen – a local farmer. Newcastle University has permission from the Secretary of State for Culture, Media and Sport and Historic England to assess the state of the monument and carry out work there.