Khajuraho: The Sexiest Temples in India

Temple Construction in the Golden Age of Central India

Legends say that the Khajuraho temples find their origins in a child born from the union of a beautiful woman named Hemvati and the Moon God . When the baby was born, his mother feared that he would be harassed since he was born out of wedlock, so she cursed the baby’s divine father.

The deity prophesied that the child, Chandravarman, would become a great king. And he did. Chandravarman founded the Chandela dynasty. After his mother had passed away, the king dreamt that she requested he build temples depicting human passions.

The Khajuraho temples were commissioned almost as soon as the Chandelas came to power in Madhya Pradesh , a region in Central India. They were dedicated to two Indian religions, Hinduism and Jainism, suggesting a culture of acceptance and respect for differing religious traditions. In a space of about 20 square kilometers (7.72 square miles), 85 temples were built by successive Chandela rulers. This was a golden age for Central India. 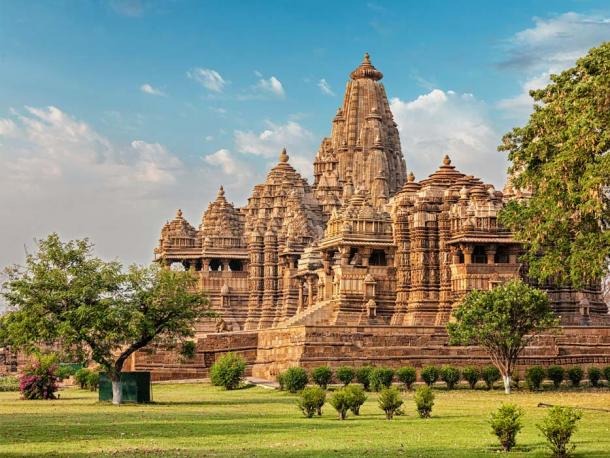 It came to an abrupt end at the start of the 13th century when the Sultanate of Delhi invaded the Chandela Kingdom and seized the capital city Mahoba (located about 35 miles (56 kilometers) from Khajuraho). Up until the invasion, the Khajuraho temples were actively worshipped. However, upon the arrival of the Muslim Delhi Sultanate, the temples were desecrated or destroyed.

The Islamic rulers had a “policy of intolerance for worship [sic] places of other religions so all the citizens of Khajuraho left the town with a hope that its solitude would not attract attention of the Muslim invaders into the temple area and in this way both temple and they themselves will remain unhurt” (Khajuraho-India, 2016).

Temples Emerge from the Jungle

It was only the relatively isolated temples that managed to survive the various Islamic dynasties that ruled the area from the 13th to the 18th century. Yet even these suffered as the forests and vegetation slowly overgrew the neglected buildings.

It was not until 1838 that Khajuraho temples were made known to the world. British explore T.S. Burt had heard rumors of a sexually explicit temple deep in the Indian jungle but “had to be persuaded by his Indian attendants to make the journey; he didn’t believe anything of interest would be found at the remote spot” (Ramadurai, 2015). 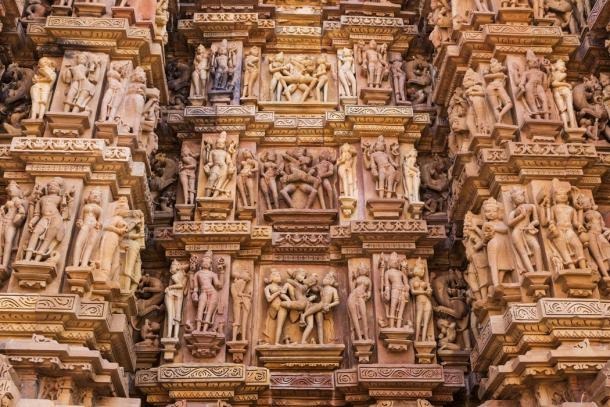 Only about 10 percent of the temples’ artwork is sexual in nature, however, these attract the most attention. The temples depict the many different manifestations of Shakti and Shiva, the female and male divine principles. Yet, human figures are the ones engaged in the mithunas (a Sanskrit term used in Tantra to describe the ritual context of sexual unions). 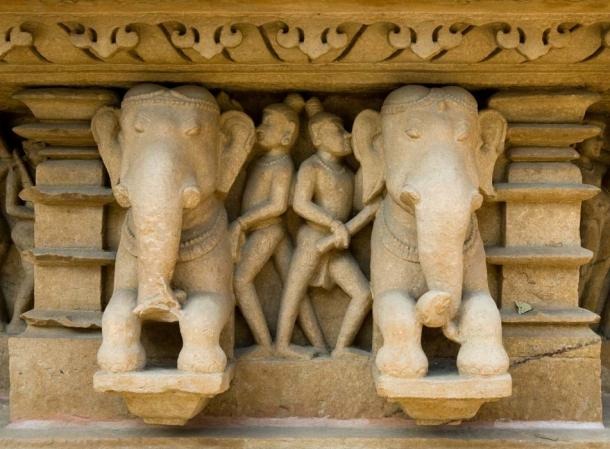 Believed to be followers of Tantric principles , the Chandela rulers may have created the temples to help foster the balance between the male and female forces, as expressed through the mutual enjoyment of physical union. Indeed, the temples portray women so openly and so freely enjoying sexual pleasures that some scholars believe that the temples are meant as a celebration of the female power:

“It is considered that these temples are a celebration of womanhood as they depict sculptures of heavily ornamented broad-hipped and busty but well-proportionate women ( apsaras) adorning the temple walls. The well contoured bodies of the nymphs grab attention and they can be seen engaging in activities like putting on make-up, washing their hair, playing games and knotting and unknotting their girdles” (Cunningham, 2016).

In contrast with many other cultures, particularly the Islamic one that took over the region shortly after the Khajuraho temples were built, the Hindu and Jain cultures did not frown upon women enjoying sex. Sexual pleasure was considered an art form, the Kama Sutra , to be practiced and perfected by both genders.

“Hinduism has traditionally considered sex an essential part of life, which could be why the carvings are casually interspersed between others that portray activities as varied as prayer and war. The fact that they are set in plain view and not tucked away in an obscure corner seems to suggest that their creators meant for them to be seen by all.” (Ramadurai, 2015) 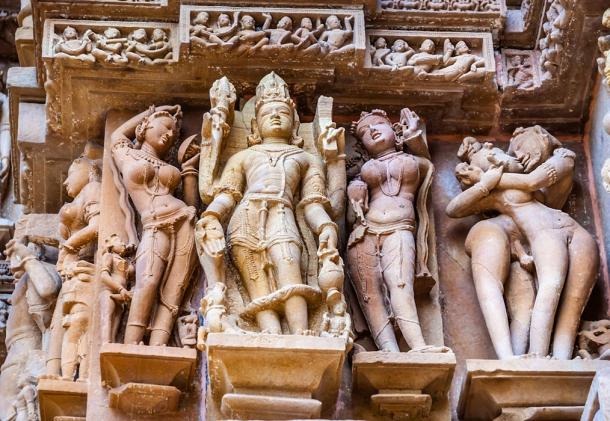 The difference is especially striking considering how conservative Indian society has grown over the last few centuries.