Archaeologists in India claim to have uncovered the remains of 4,000-year-old horse-drawn chariots, which they say provides the first evidence of a “warrior class” on par with other ancient civilisations. 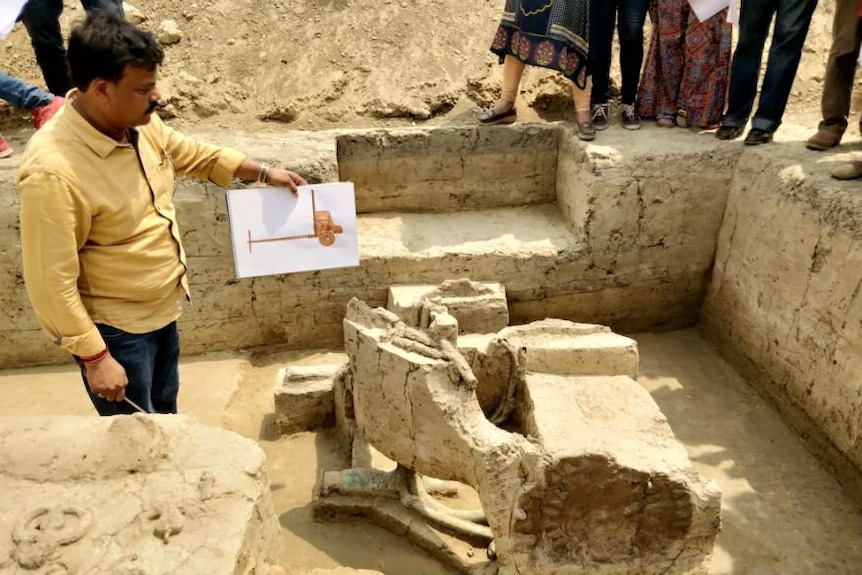 The remains were discovered at an Archaeological Survey of India (ASI) excavation site at the village of Sinauli, about 70 kilometres north of New Delhi, where eight burial sites and artefacts including swords and daggers were also found.

The researchers said they unearthed three chariots in burial chambers which date to between 2000 and 1800 BC in the Bronze Age, leading to a suggestion of “royal burials”, according to the Times of India.

The area around Sinauli is considered to be a rich archaeological site, with the chariots found 120 metres from a site where graves and artefacts belonging to the Indus Valley civilisation were excavated after a farmer accidentally unearthed ruins in 2005.

The co-director of excavations and ASI’s Institute of Archaeology in Delhi, SK Manjul, claimed the find showed evidence that a warrior class existed that was as technologically advanced as their contemporaries in Mesopotamia and Greece.

“The discovery of a chariot puts us on a par with other ancient civilizations, like Mesopotamia, Greece et-cetera where chariots were extensively used,” Mr Manjul told the Times of India.

“It seems a warrior class thrived in this region in the past.” 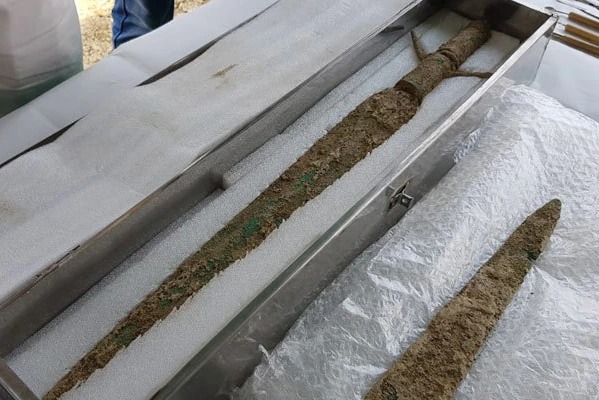 The researchers also discovered swords and daggers made of copper at the excavation site.(Supplied: Twitter)
The site where the chariots were found is part of a three-month excavation that started in March.

As well as warrior implements like swords, daggers and a helmet, Mr Manjul told the Times of India they had also discovered copper pots, beads and a copper mirror which pointed to sophisticated craftsmanship and lifestyle.

“The swords have copper-covered hilts and a medial ridge making it strong enough for warfare. We have also found shields, a torch and daggers,” he said.

In what he described as a first “in the entire continent”, Mr Manjul said the coffins found at the site were adorned with copper decorations.

Mr Manjul said they were yet to work out which society the chariots and coffins belonged to, but said they did not belong to the Indus Valley civilisation.