Images in Roman mosaics meant to dispel the envious

Driving away bad luck, the evil eye and, in short, envious people — this was one of the purposes of mosaics in Ancient Rome, according to research coordinated by Universidad Carlos III de Madrid, which analyzed rituals and magic practices in these artistic representations.

Ancient literary sources and data provided by archaeology offer much information about the religious beliefs of the Romans, such as their rituals and magic or funeral practices. “With this research, we are trying to find out how these beliefs are represented in Roman mosaics throughout the Empire,” said UC3M professor of Ancient History Luz Neira, who coordinates the team of twelve researchers that recently published their findings in the book Religiosidad, rituales y prácticas mágicas en los mosaicos romanos (CVG, 2014).

The researchers stress that mosaics are not only works of art, but also documentary sources of the highest order for the study of history. Their analysis reveals the vision that the most powerful citizens had regarding these subjects, as it was mainly the elite classes who commissioned them for their domestic and private spaces. “The most common representations deal with marriage, sacrifices (the ritual act of religiosity par excellence), or scenes against the evil eye and which try to protect against envy,” explained Professor Neira.

This type of mosaic had an apotropaic effect; that is, it was a kind of defense mechanism in Roman superstition to ward off evil spirits. To protect oneself from the evil eye, for example, they resorted to the representation of an eye pierced by a lance and surrounded by animals, in some cases with inscriptions. Images of mythological characters with prominent phalli or other scenes that would drive away envious people were placed in the hallways of homes. One such depiction is in a mosaic on the island of Cephalonia, where an envious person is represented by someone writhing and strangling themselves because of the envy produced by the house they are looking at.

A work of historians and archaeologists

These subjects are not confined to a specific epoch, but instead are documented throughout the history of the Roman Empire. “This is very important because it documents the survival of certain customs that come from pagan imagery,” said Luz Neira. A great team of specialists were involved in her study. Jesús Bernejo, from the UC3M Institute of Culture and Technology, analyzed one of the fundamental rituals in the social and legal organization of Ancient Rome, marriage. Professor Neira worked with the topic of animal sacrifice, while Ciro Parodo, from Tünbingen Universität, researched how certain religious festivities were chosen for the representation of the months on the calendar. Dimas Fernámdez Galiano examined the change in the mentality of the owners of the villa of Fortunatus in Fraga (Huesca) through their mosaic documentation, while the director of the National Museum of Roman Art, José María Álvarez, analyzed the influx of mythological heroes from pagan imagery in the shaping of figures linked to Christianity. 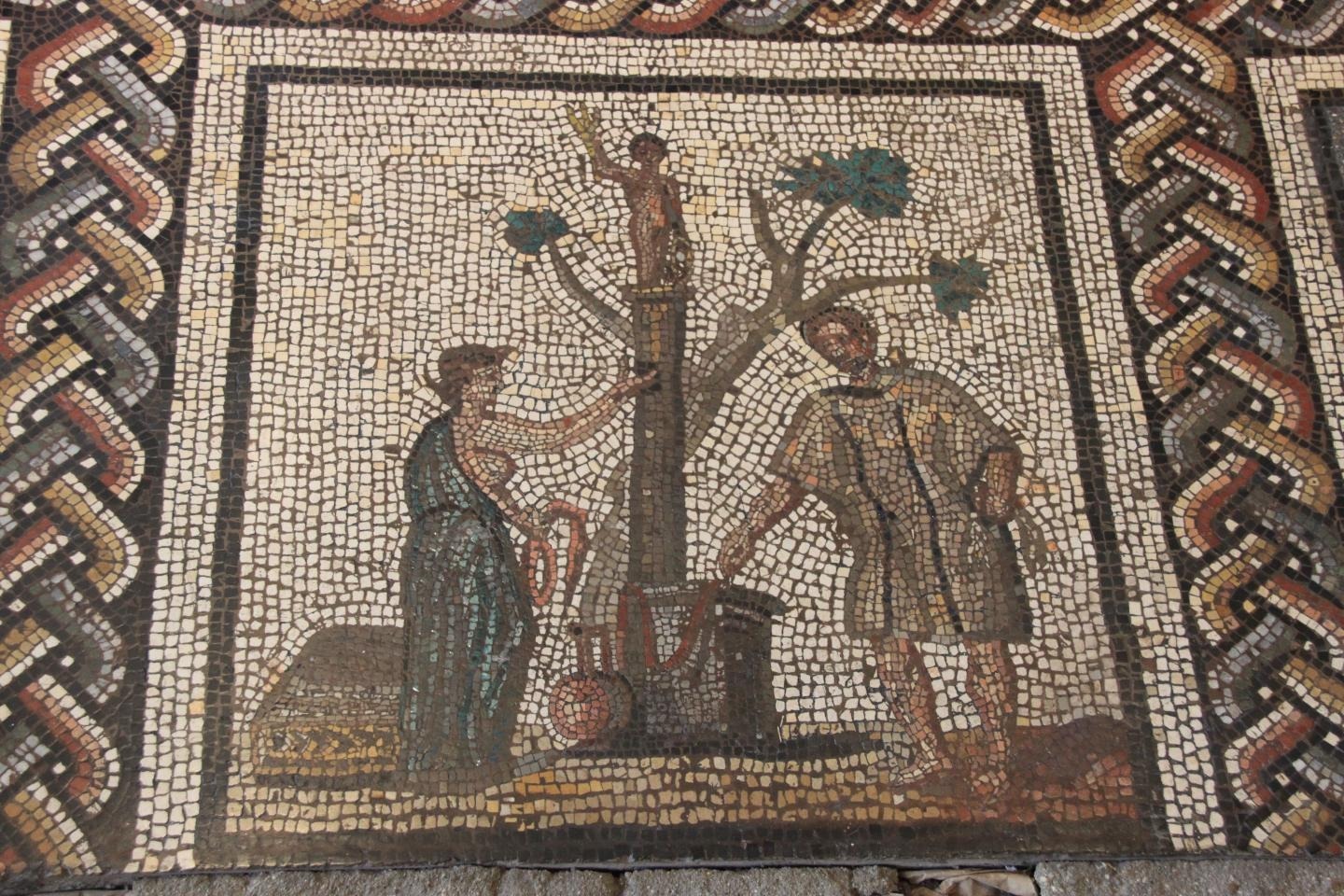 The study of the complex relationship between religion and magic is credited to Santiago Montero, Full Professor of Ancient History at the Universidad Complutense de Madrid. In that same line, María Pilar San Nicolás and Irene Mañas, professors at the UNED, analyzed inscriptions designed to deter envious people and representations regarding superstitions that reveal the Romans’ terror of the evil eye. Catia Mourao, from the Institute of Art History at the Universidade Nova in Lisbon, took metamorphosis into consideration, in reference to the consequences of practicing magic.

In addition to introducing us to the beliefs and funeral practices of the Romans, Desiderio Vaquerizo, Full Professor of Archaeology at the UCO, reveals in his contribution the terror that the deaths of persons with some type of physical or mental anomaly entailed and the extraordinary practices linked to their burials. It has nothing to do with the tranquil scene that funeral mosaics document, most of them of individuals converted to Christianity, studied by Luigi Quattrocchi in Cerdeña, and by José María Baázquez, from the Royal Academy of History, in Spain and North Africa.