Hisham’s Palace, or Khirbat Al Mafjar, is an important early Islamic archaeological site, and one of the few surviving antiquities of the Roman and Byzantine eras in the West Bank area. Located just outside the Palestinian city of Jericho, the complex provides us with important insights into the lives of the Umayyad dynasty’s rulers, as well as the evolution of early Islamic art and architecture in the area.

A large portion of Khirbat Al Mafjar , or Hisham’s Palace, has been covered by a dome to aid preservation and restoration ( Ministry of Tourism and Antiquities, Palestine )

For such an important site, little is known about Hisham’s Palace near ancient Jericho. We have no textual sources which refer to the palace, and for this reason, historians have had to rely almost solely on the results of various archaeological excavations.

An ostracon (a broken piece of pottery with writing on it) found during the first round of excavations in 1934 bears the name Hisham. This was seen as evidence that the palace was built during the reign of Hisham ibn Abd al-Malik, the tenth Umayyad caliph, who ruled between 724 and 743 AD. The palace complex was thus given his name by 20th century historians. 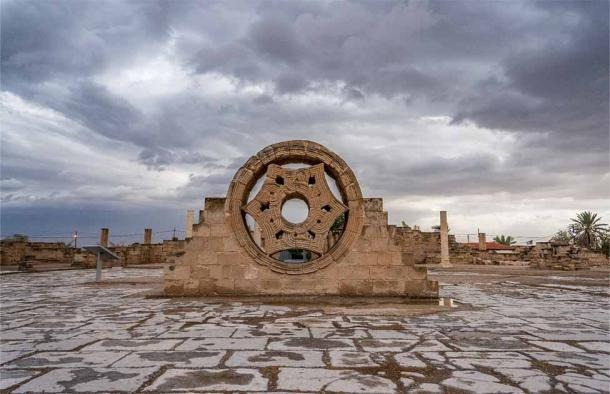 Others, however, have claimed the palace was owned by al-Walid ibn Yazid (al-Walid II), Hisham’s nephew. He took over the caliphate after his uncle’s death, ruling from 743 AD until his assassination in 744 AD. Al-Walid II was famous for his lavish lifestyle and expensive tastes. Either way, archaeological evidence points to the site being built during the Umayyad dynasty, likely at some point during the first half of the 8th century. It is only unclear who commissioned it, Hisham or his nephew.

Hisham’s Palace is what is known as a desert palace . This is a collection of structures that share two important things in common. First, they all date back to the Umayyad dynasty. Second, they are located in modern-day Syria, Jordan, Israel, and the West Bank.

Aside from their shared Umayyad dynasty origins, very little ties these monuments together. They vary in patronage, size, and presumed function. Some desert palaces are Roman or Ghassanid structures that the caliphate took and occupied, while others were built along important trade routes or near vital water sources.

It was originally believed that the palace was destroyed during an earthquake in 749 AD. This devastating earthquake razed the cities of Tiberias, Beit She’an, Gadara, and Hippos, and heavily damaged numerous sites across the Levant. The earthquake took tens of thousands of lives, and it was presumed Hisham’s Palace and its occupants were victims of the earthquake too.

However, modern analysis of the original reports by archaeologist Dmitri Baramki, the first man to excavate the site, point towards something different. The ceramic record suggests that the palace survived the earthquake and was occupied throughout the Ayyubid Manluk period, the founding dynasty of the sultanate of Egypt established in 1171 AD. In particular, it appears that the palace saw heavy use between 900 and 1000 AD. A geological survey in 2013 pointed to the palace being heavily damaged or destroyed in an earthquake in 1033 AD.

Little more is known about the history of the palace. It is ultimately unclear when the site fell into disuse and disrepair. The 2013 survey may point to the year 1033 AD, but there is some evidence to suggest the site was still in use in the decades following the earthquake. Archaeological surveys continue in the area.

The Architecture of Hisham’s Palace

Although not much is certain about the palace, its architecture gives us several clues. Its layout and location point towards it serving as a khan or guest house. Its rich decor and beautiful mosaics reflect the wealth and power of the Umayyads. It is this splendor that points to it being the residence of the more extravagant al-Walid II. 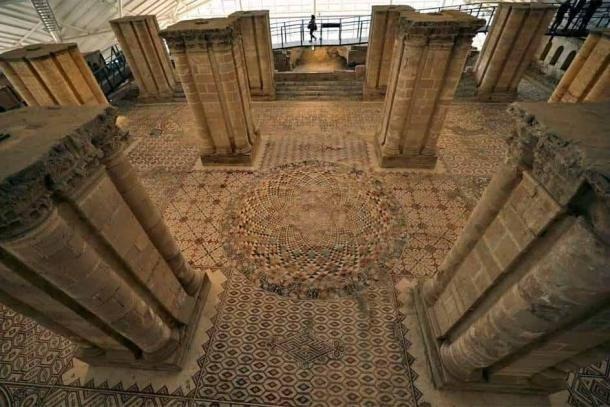 Extensive restoration of some mosaics was completed last year, and the site was reopened to the public ( Ministry of Tourism and Antiquities, Palestine )

Hisham’s Palace covers an area of around 60 hectares (150 acres), and is made up of three areas: the palace itself, a mosque and courtyard, and a bath. The bath was particularly impressive and housed an audience hall that was used as a throne room. The site was bordered by an outer wall; the main gate was located on the southern facade. The gate was flanked by two buttress towers on either side.

The palace itself is made up of a series of larger and smaller rooms which all face inward, surrounding a central courtyard. The building feels enclosed and intimate, mimicking the ancient Oriental concept of what a house is: an area enclosed by walls. The enclosed nature of the palace residence implies it was an area reserved for the occupying family, not an area for guests or politics.

Hisham’s Palace bath hall is in some ways the opposite of the residential area. The bath hall is heavily and decadently decorated and is the best evidence we have that al-Walid II once resided in the palace. It was in the bath hall that he could invite guests and show off the caliphate’s wealth and power. 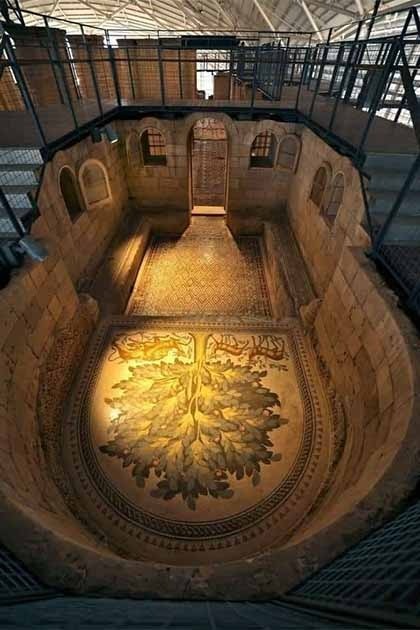 The bathhouse complex features some of the earliest and largest mosaic panels from Islamic architecture’s classical period. The most famous panel depicts a lion attacking a gazelle underneath a tree. The bathhouse has become famous among historians of Islamic art . 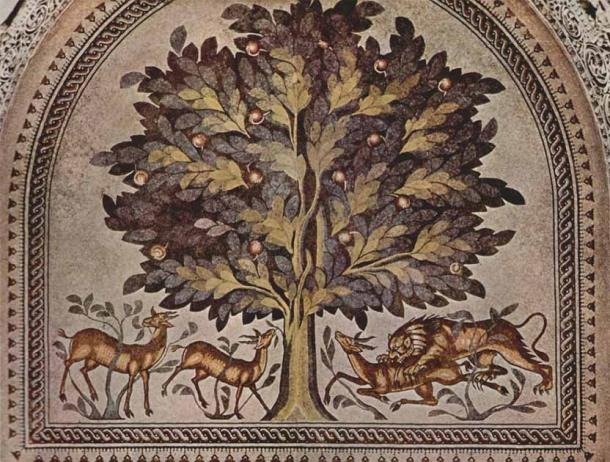 A close-up of the “Tree of Life” mosaic in the audience room of the bath house at Hisham’s Palace, Jericho (Larry Koester / CC BY 2.0 ) 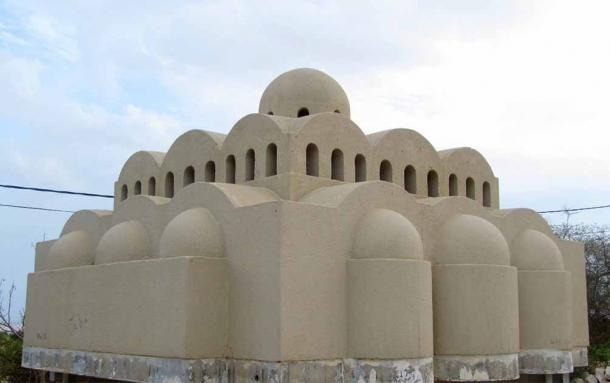 The actual bath is located 40 meters (131 feet) north of the palace, and it is the complex’s second-largest building. The bath appears to have been built before the palace itself. While it may seem odd to have the bathhouse so far away from the main site, this was not uncommon with desert palaces. Similar sites like the Hammam at Sarakh and Qusayr Amra baths were built in remote areas far away from residential buildings.

A model of what historians believe Hisham’s Palace looked like. (Tamar Hayardeni / CC BY 3.0 )

Mosaics and Decoration in Hisham’s Palace

While the buildings and architecture of Hisham’s Palace are impressive in their own right, it is the artwork and decoration of the palace which really stand out. The palace was adorned with mosaics, stucco carvings, and sculptures. The floor of the bath was covered in a tapestry of thirty-eight geometric mosaics, and the walls were covered with finely painted stucco. 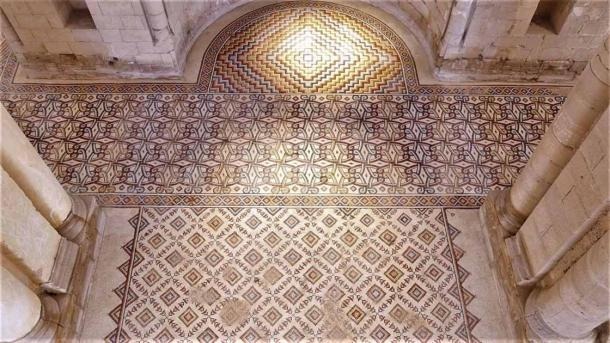 Several of the many geometric mosaics in Hisham’s Palace, giving us new insight into early Islamic art ( Ministry of Tourism and Antiquities, Palestine )

In historical terms, the artwork of the palace shows an evolution of early Islamic art. The decorators of the palace combined older forms of art with the newer forms reflecting the immensely wealthy Umayyad dynasty culture.

The paintings of the palace are an invaluable record of a tradition of painting in pre-Islamic Syria and Palestine. They serve as evidence that there were enough surviving monuments from earlier times in the area to allow the combination of newer and older artistic styles. The artwork shows a meeting of worlds, a combination of east and west.

Hisham’s Palace is an incredibly important Islamic historical site. Due to the repeated past earthquakes and modern bloodshed in the area, there are increasingly few surviving examples of desert palaces. Hisham’s Palace gives us valuable insight into the history of this culturally rich area.

Hisham’s Palace, Khirbat Al Mafjar, also stands as a testament to the wealth and power of the Umayyad dynasty. Anyone visiting the palace in its time would have been impressed by its magnificence. Sadly, the lack of a written record means there is still much we do not know about this impressive monument. Hopefully, further excavations in the area will give us additional information and insight into this part of the ancient world.