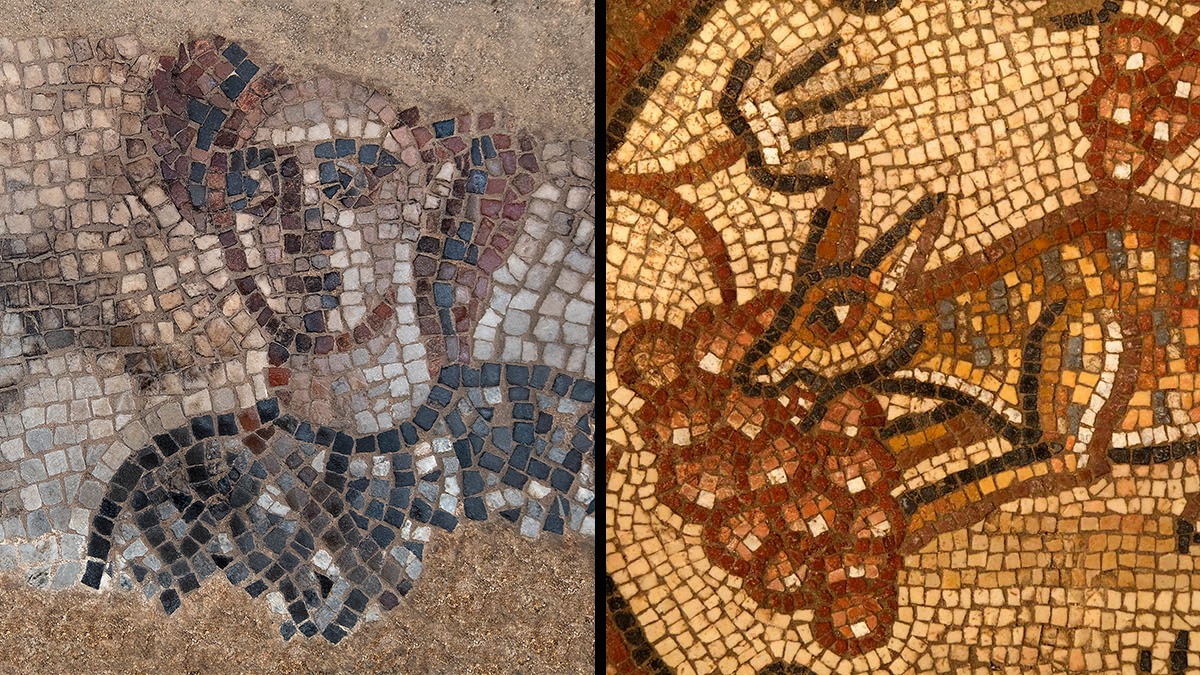 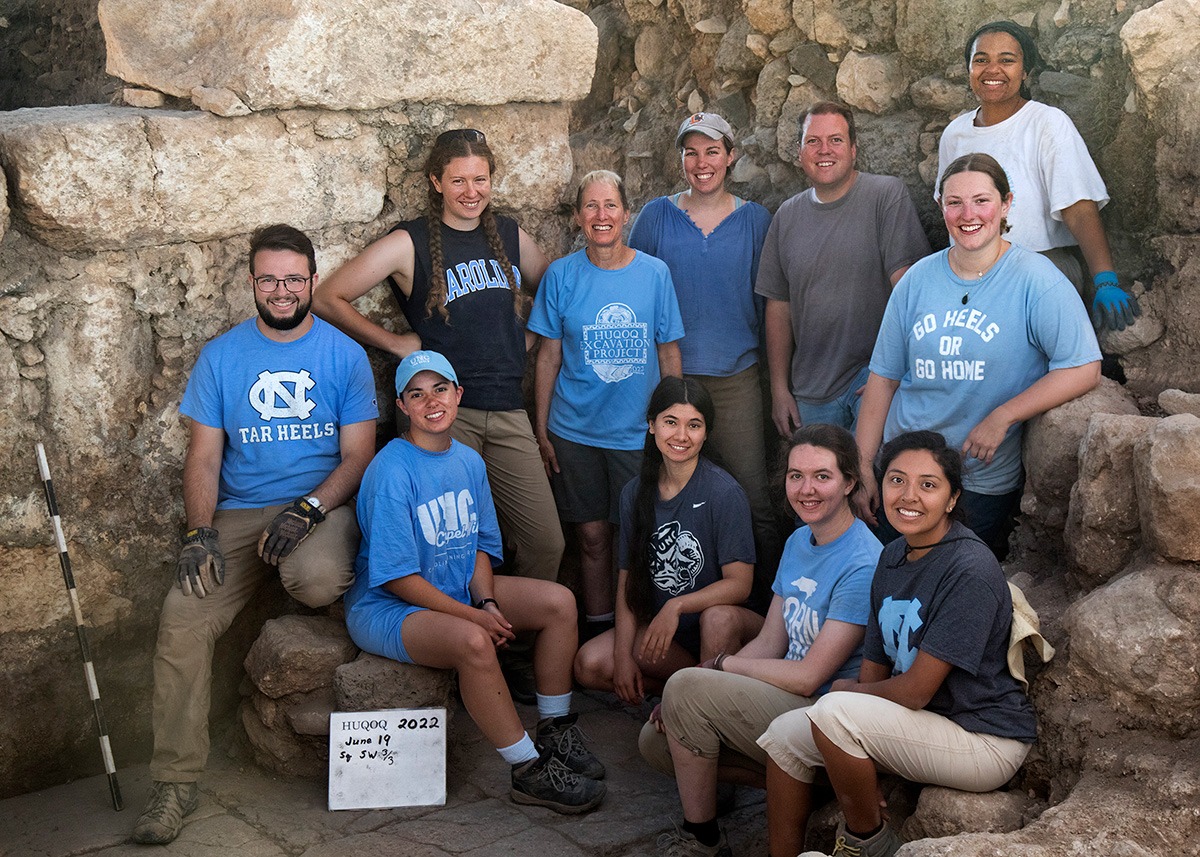 Left: The Israelite commander Barak depicted in the Huqoq synagogue mosaic. Right: Fox eating grapes depicted in Huqoq synagogue mosaic. (Photos by Jim Haberman)
A team of specialists and students led by University of North Carolina at Chapel Hill professor Jodi Magness recently returned to Israel’s Lower Galilee to continue unearthing nearly 1,600-year-old mosaics in an ancient Jewish synagogue at Huqoq. Discoveries made this year include the first known depiction of the biblical heroines Deborah and Jael as described in the book of Judges.

The Huqoq Excavation Project is now in its 10th season after recent seasons were paused due to the COVID-19 pandemic. Project director Magness, the Kenan Distinguished Professor of religious studies in Carolina’s College of Arts and Sciences, and assistant director Dennis Mizzi of the University of Malta focused this season on the southwest part of the synagogue, which was built in the late fourth-early fifth century C.E.

This season, the project team unearthed a part of the synagogue’s floor decorated with a large mosaic panel that is divided into three horizontal strips (called registers), which depicts an episode from the book of Judges chapter 4: The victory of the Israelite forces led by the prophetess and judge Deborah and the military commander Barak over the Canaanite army led by the general Sisera. The Bible relates that after the battle, Sisera took refuge in the tent of a Kenite woman named Jael (Yael), who killed him by driving a tent stake through his temple as he slept. The uppermost register of the newly-discovered Huqoq mosaic shows Deborah under a palm tree, gazing at Barak, who is equipped with a shield. Only a small part of the middle register is preserved, which appears to show Sisera seated. The lowest register depicts Sisera lying deceased on the ground, bleeding from the head as Jael hammers a tent stake through his temple.

“This is the first depiction of this episode and the first time we’ve seen a depiction of the biblical heroines Deborah and Jael in ancient Jewish art,” Magness said. “Looking at the book of Joshua chapter 19, we can see how the story might have had special resonance for the Jewish community at Huqoq, as it is described as taking place in the same geographical region – the territory of the tribes of Naphtali and Zebulon.”

Also among the newly discovered mosaics is a fragmentary Hebrew dedicatory inscription inside a wreath, flanked by panels measuring 6 feet tall and 2 feet wide, which show two vases that hold sprouting vines. The vines form medallions that frame four animals eating clusters of grapes: a hare, a fox, a leopard and a wild boar.

A decade of discovery
Mosaics were first discovered at the site in 2012, and work continued each summer until the COVID-19 pandemic paused work after the dig in 2019. The mosaics exposed in the last 10 active seasons cover the synagogue’s aisles and main hall.

Discoveries along the east aisle include:

Panels depicting Samson and the foxes (as related in Judges 15:4)
Samson carrying the gate of Gaza on his shoulders (Judges 16:3)
A Hebrew inscription surrounded by human figures, animals and mythological creatures including putti, or cupids
The first non-biblical story ever found decorating an ancient synagogue — perhaps the legendary meeting between Alexander the Great and the Jewish high priest
The mosaic floor in the north aisle is divided into two rows of panels containing figures and objects accompanied by Hebrew inscriptions identifying them as biblical stories, including:

One panel depicts two of the spies sent by Moses to explore Canaan carrying a pole with a cluster of grapes, labeled “a pole between two” (from Numbers 13:23)
Another panel showing a man leading an animal on a rope is accompanied by the inscription “a small child shall lead them” (Isaiah 11:6)
The mosaics panels in the nave, or main hall, include:

A portrayal of Noah’s Ark
The parting of the Red Sea
A Helios-zodiac cycle
Jonah being swallowed by three successive fish
The building of the Tower of Babel
In 2019, the team uncovered panels in the north aisle that frame figures of animals identified by an Aramaic inscription as the four beasts representing four kingdoms in the book of Daniel, chapter 7. A large panel in the northwest aisle depicts Elim, the spot where the Israelites camped by 12 springs and 70 date palms after departing Egypt and wandering in the wilderness without water (Exodus 15:27).

In the 14th century C.E. (the Mamluk period), the synagogue was rebuilt and expanded in size, perhaps in connection with the rise of a tradition that the Tomb of Habakkuk was located nearby, which became a focal point of late medieval Jewish pilgrimage.

“The 14th century C.E. building appears to be the first Mamluk period synagogue ever discovered in Israel, making it no less important than the earlier building,” said Magness.

Sponsors of the project are UNC-Chapel Hill, Austin College, Baylor University, Brigham Young University and the University of Toronto. Students and staff from Carolina and the consortium schools participated in the dig. Financial support for the 2022 season was also provided by the National Geographic Society, the Loeb Classical Library Foundation, the Kenan Charitable Trust and the Carolina Center for Jewish Studies at UNC-Chapel Hill.

The mosaics have been removed from the site for conservation, and the excavated areas have been backfilled. Excavations are scheduled to continue in summer 2023.