Archaeologists report they have uncovered a second mosaic at the site of the 2020 mosaic discovery at the Roman villa site in Rutland, UK.

Dating back to the third or fourth century A.D., the villa complex was first discovered on farmland in 2020, and excavations found the remains of a mosaic that depicts the story of the legendary hero Achilles from the Iliad and his battle with the Trojan Prince Hector. 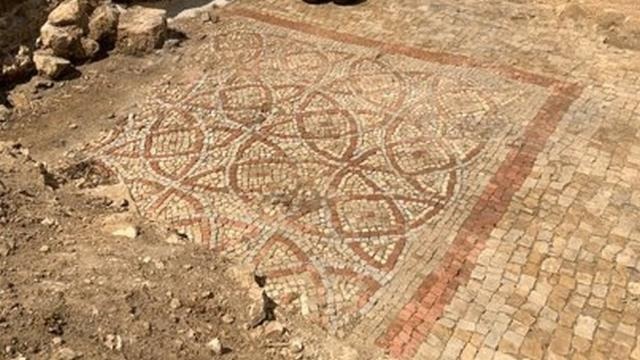 Following investigative work by a team from the University of Leicester Archaeological Services (ULAS), working in partnership with Historic England and in liaison with Rutland County Council, it was awarded Scheduled Monument status in November 2021.

Excavations underway in 2022 have now uncovered a hall 50 meters from the main villa, which may have been a converted old barn, originally built of wood and converted to stone in the 3rd or 4th century AD. One end of the building was used for agricultural or handicraft work, while the other was a spacious living area with a bathroom with warm (laconicum) and cold (frigidarium) rooms.

The dwelling had many floors still intact and a complicated sequence of internal walls, illustrating that it had been in use for a long period of time and had undergone a series of interior changes.

There is evidence of sophisticated underfloor heating that used different techniques to maintain varying temperatures and heating ducts built into the walls. It is thought that the floor of a water tank situated outside the building might have been used to collect water from the roof. 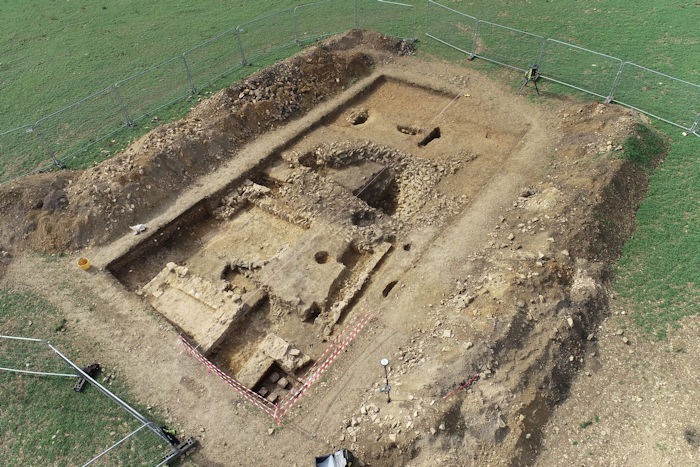 The expanded excavation has uncovered more details of living complex, including expensive materials such as parts of broke pillars, which hint at the owners’ wealth. Photo: Historic England
Archaeologists said they were “gobsmacked” to find more lavish buildings and another mosaic when they returned to the area in Rutland.

The team discovered polished marble fragments, broken stone columns, and painted wall plaster while focusing on the main villa. The most notable feature is evidence of mosaics in the corridors leading to the dining room (known as a triclinium), one of which is relatively intact and features an intricate geometric pattern that most likely dates to the same construction period as the Trojan War mosaic.

The new discoveries provide additional evidence that the villa was occupied by a wealthy individual, implying that the estate was inhabited earlier than previously thought. 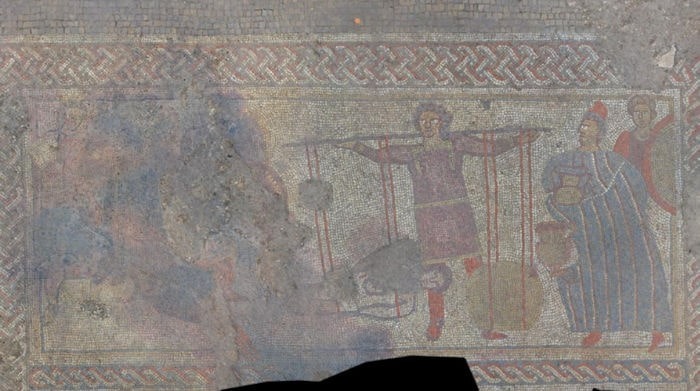 A newly found mosaic at the site. Photo: Historic England
The dining room was added later to the main villa building, suggesting that the owners wanted to demonstrate their wealth and knowledge of Roman culture by creating a new area for feasting while gazing out over the ancient story told on the mosaic.

Historic England’s Chief Executive, Duncan Wilson, said: “This is a fascinating site and has posed many questions about life in Roman Britain. The answers will become clearer as the evidence is examined over the next few years by a team of specialists, and their work will help us understand the story of this villa complex, and its significance for our understanding of Roman Britain.”

John Thomas, Deputy Director of ULAS and Project Manager of ULAS excavations, said: “It’s difficult to overstate the significance of this Roman villa complex to our understanding of life in late Roman Britain. While previous excavations of individual buildings, or smaller scale villas, have given us a snapshot, this discovery in Rutland is much more complete and provides a clearer picture of the whole complex.

‘’The aim of this year’s work has been to investigate other buildings within the overall villa complex to provide context to the Trojan War mosaic. While that is a wonderful, eye-catching discovery, we will be able to learn much more about why it was here, and who might have commissioned it, by learning about the villa as a whole.

Rutland County Council Portfolio Holder for Culture, Councillor Marc Oxley, said: “These wonderful further finds paint a vivid picture of the cultural life of our ancestors in Roman times. A fascination with art, design, architecture, storytelling and fine dining are part of our common heritage and bring to life our understanding of the past.