An ancient Greek and Roman city called Metropolis within the borders of Turkey’s Izmir province has yielded many precious gifts over three decades, the latest being the statue of a noblewoman.

The excavation of the Metropolis town, an ancient city in Izmir’s Torbali district, between Yenikoy and Ozbey neighbourhoods, has been going on since 1990. The history of Metropolis goes back as far as early Late Neolithic Age settlements to the Classical Age, from Hellenistic Age to Roman and Byzantine periods, to the chiefdom times to the Ottoman Empire.

The excavation is being carried out with the permission and support of Turkey’s Ministry of Culture and Tourism. Now in its 31st year, it promises to unearth many treasures from the past.

The excavation team is led by Prof Dr Serdar Aybek from Manisa Celal Bayar University Department of Archaeology. He and his team plan to excavate centers of public and religious life like waterways and a church. 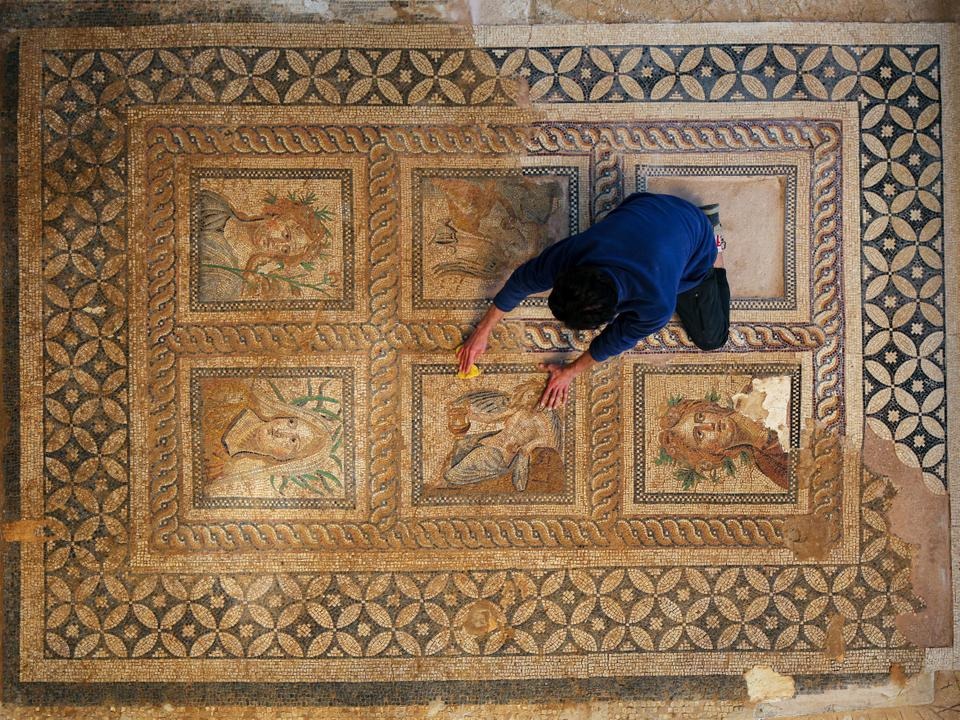 Human figures and geometric patterns will emerge in all their colourful glory as the excavation team cleans the mosaics found in the Mosaic Room. (Courtesy of the Sabanci Foundation)
The city of Metropolis is known as “the city of the mother goddess” due to pagan beliefs deifying female fertility figures. During this year’s dig, the team plans to excavate two newly-discovered water cisterns and unearth four interconnected cisterns that were used to store water.

Aybek says that they are thrilled to witness the emergence of an ancient town over the last 30 years, viewing the transformation of a barren hill into a most significant ancient town and archaeological arena.

“The transformation was made possible with the support of our state first of all, and also the support of institutions from all walks of life as well as even by individuals. We too are part of this great project as students, workers and colleagues,” he notes. “Already we are making plans for new research, projects and applications for the coming years in Metropolis.” 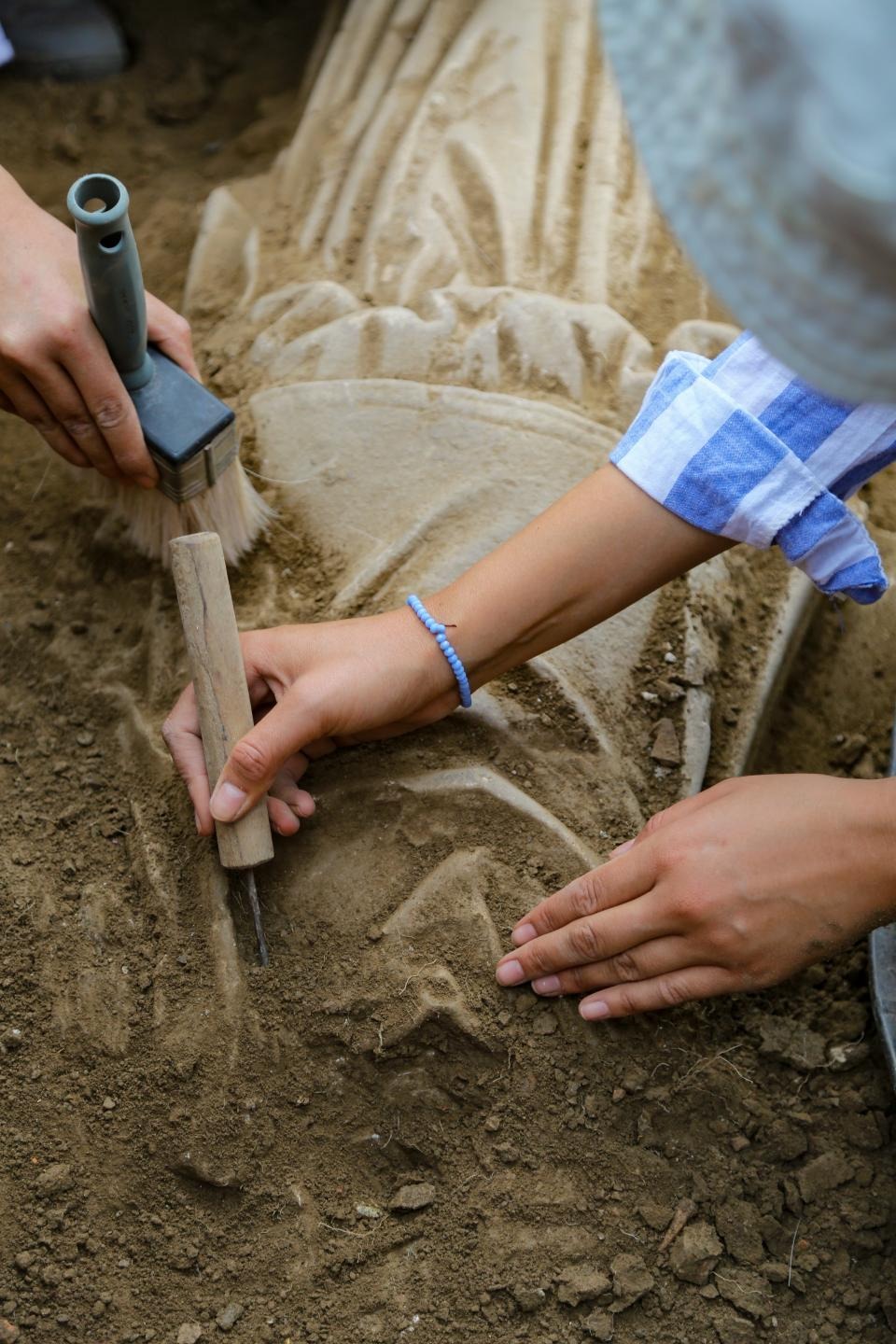 Archaeologists have been excavating Metropolis city in Izmir, Turkey for 30 years. ()
The Sabanci Foundation has been supporting the Metropolis ancient city excavations for 18 years. General Manager Nevgul Bilsen Safkan says the foundation believes that the excavation is a very valuable “bridge from the past to the present to the nations who lived on this soil, contributing to archaeological sciences and continuing to shed a light to history.”

Safkan continues to say that the “magnificent” female statue found in the first days of the 2021 excavation in June has thrilled them to no end: “We are waiting with great enthusiasm to see what will emerge from the excavation this year in the Mother Goddess Town – Metropolis.”

The sculpture of a noblewoman, modelled after a Greek statue carved by a famous artist, was the first significant find of the 2021 season at Metropolis ancient town. (Courtesy of the Sabanci Foundation)
Statue of a noblewoman unearthed in 2021

The female statue that Safkan is talking about is a recent find, dug during the initial days of the 2021 season excavation. The statue was discovered in the city centre, which was expanded during the Roman Empire, at a newly-unearthed public building.

The marble statue is believed to be modelled after a significant statue created at the height of antique sculpture, and was created around first and second century CE in honour of a noblewoman from Metropolis.

In the same area discoveries were made of pieces of other sculptures and pedestals, suggesting that the public arena was home to sculptures honouring philanthropic Metropolis residents. The excavation team believes that continuing their work will result in the discovery of similar finds. 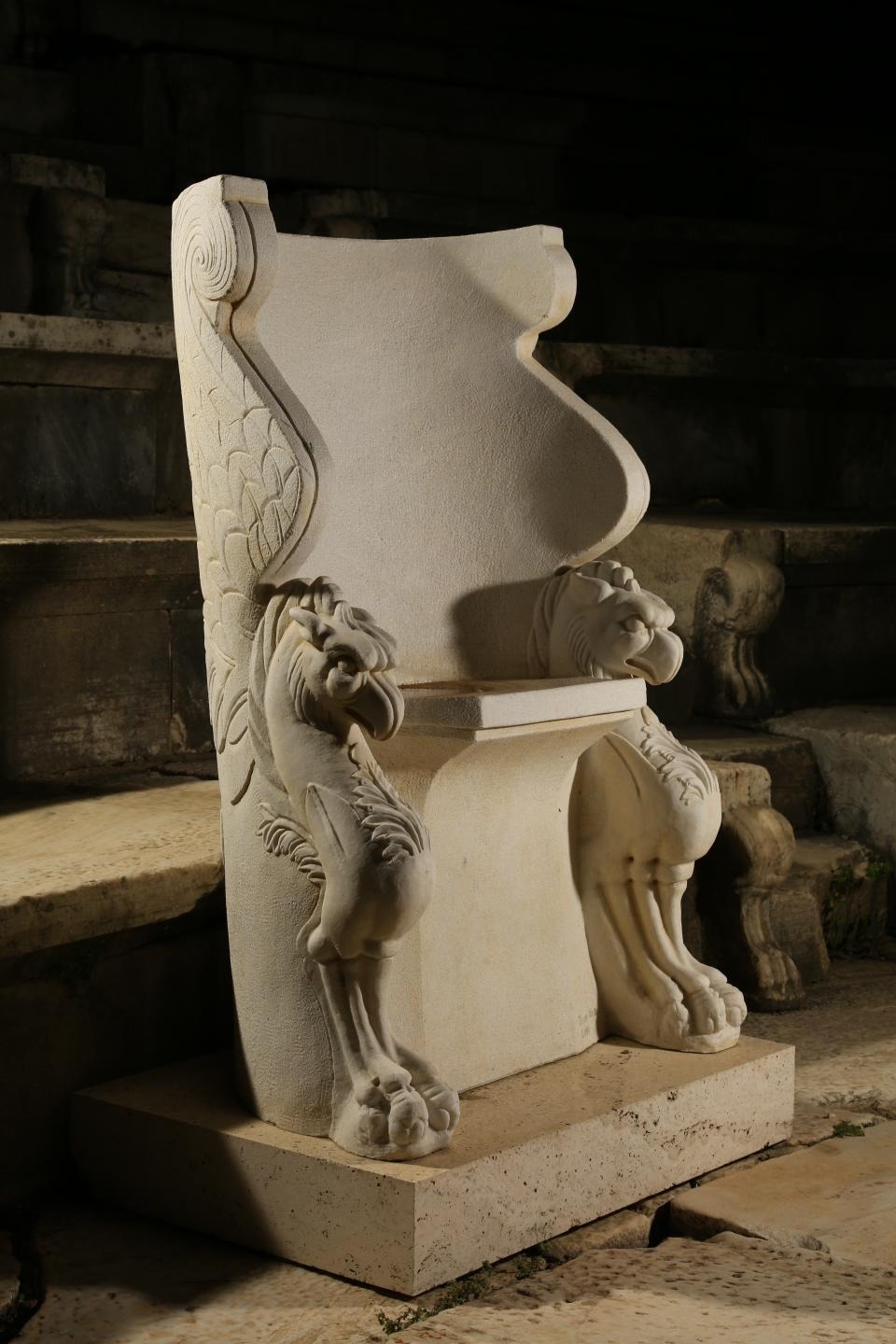 Metropolis city boasts an amphitheatre, replete with carved marble seats of honour decorated with griffins. (Courtesy of the Sabanci Foundation)
Araplidere Church to be unearthed, mosaics to be cleaned up

In 2021, the excavation team is beginning work on unearthing a Late Roman Period church complex that is believed to prove that Metropolis was a significant religious centre in its final years.

Likewise, the excavation team will focus on cleaning up mosaics that have been quite well-preserved and spread out over a large area. Cleaning up the lime deposits that have accumulated over time is expected to bring out the rich colour and patterns of the tiles.

In the excavations carried out over decades, discoveries were made of buildings and locations that make up the ancient city texture, such as a theatre belonging to the Hellenistic Period, as well as two Roman bathhouses, bathhouse and Palaestra (sports arena) complexes, a room paved with mosaics, a peristyle house (with a continuous porch and a row of columns), shops, public bathrooms, avenues and streets.

The artefacts unearthed during the excavations can be viewed at Izmir Archaeology Museum, Izmir History and Art Museum and Selcuk Efes Museum.