A 1,300-Year-Old Gold Necklace Found in an Early Christian Burial in England Is a ‘Once-in-a-Lifetime Discovery,’ Says Archaeologist

The so-called “Harpole Treasure,” which scholars think may have belonged to a female religious leader, will be featured on BBC Two’s “Digging for Britain.” 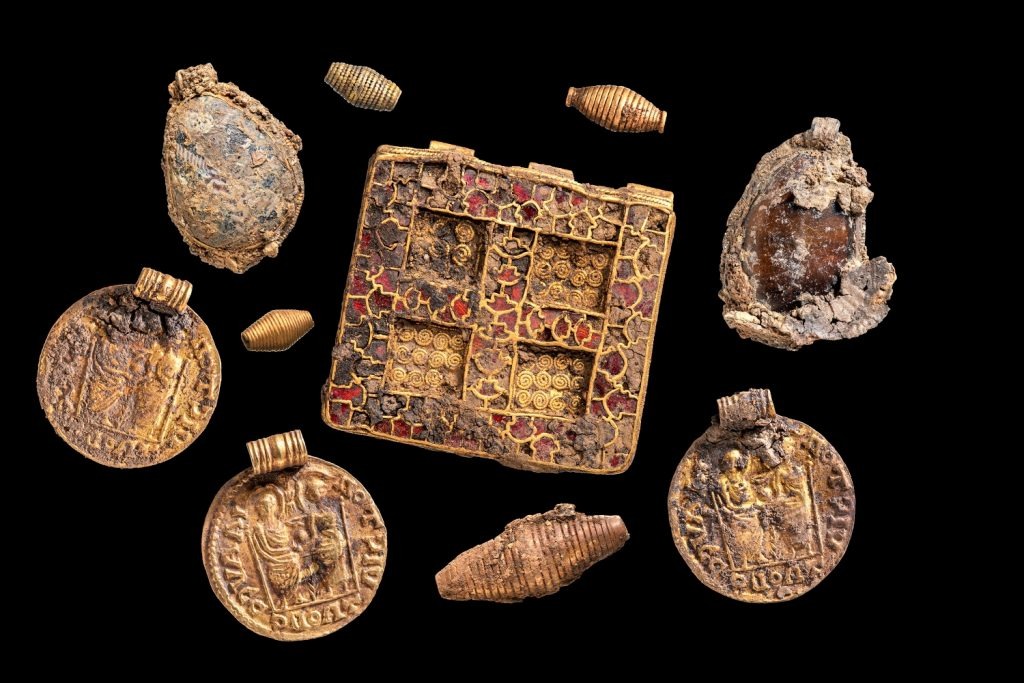 Collection of pendants from the Harpole Treasure. Photo by Andy Chopping; © MOLA.
An exquisite gold necklace from the seventh century C.E. has been found in England at the burial site of a powerful woman who was interred some 1,300 years ago, according to the Associated Press.

The necklace, known as the Harpole Treasure after the Northamptonshire village where it was discovered, is decorated with 30 pendants and beads fashioned from gold Roman coins and semi-precious stones. The large rectangular pendant features a cross, iconography that suggests the deceased may have been an early Christian religious leader. The use of precious metals and stones suggests she was also very wealthy. 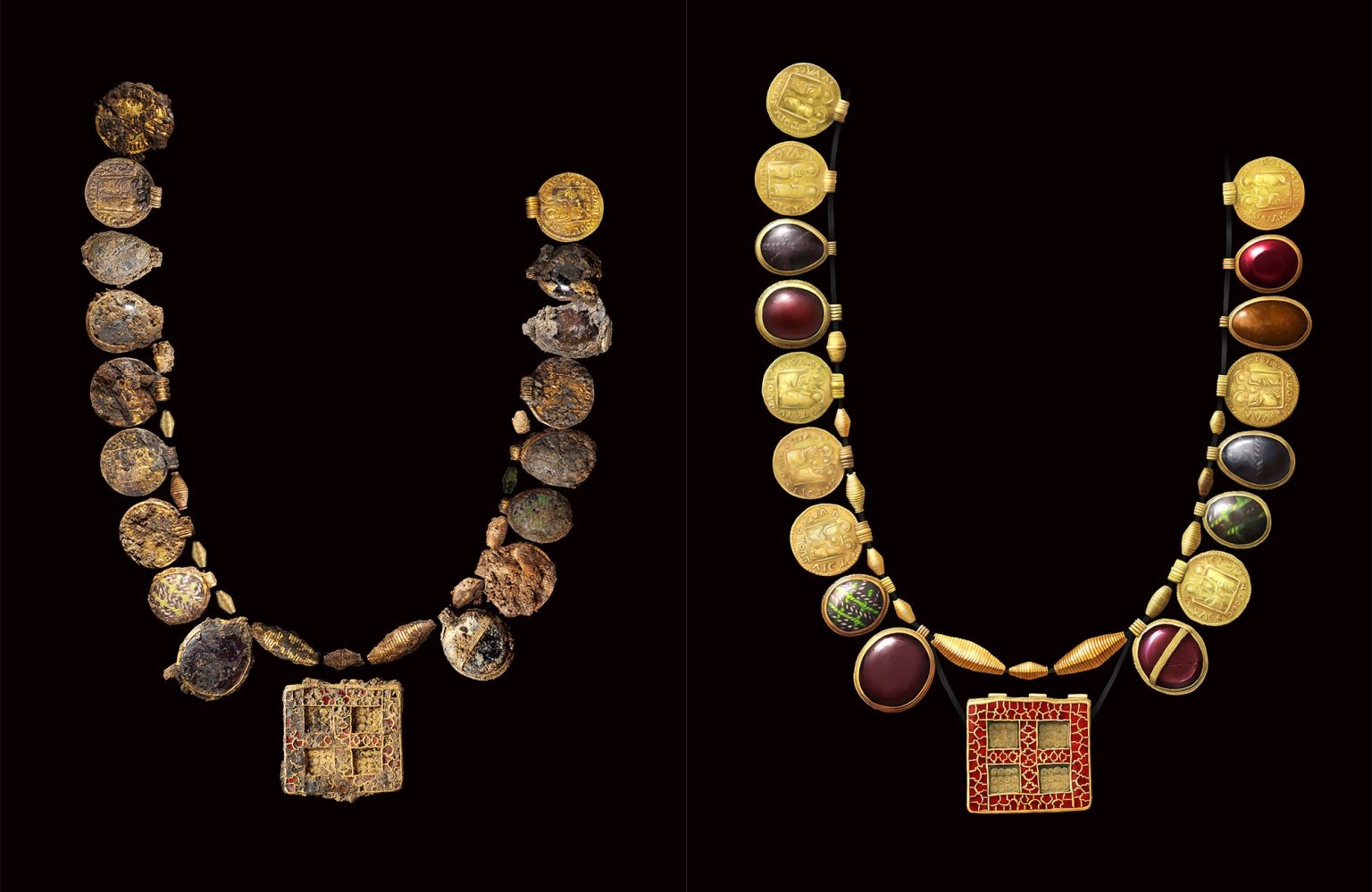 Necklace reconstruction and layout side by side. Image courtesy of the Museum of London Archaeology.

Also unearthed was an ornate silver cross, which is in the process of being micro-excavated following an X-ray analysis. Scholars believe it would have been laid on her chest. She was surrounded by clay pots made in France or Belgium that still contain some unidentified residue.

“Smaller crosses or brooches with cross motifs worn on the chest have been found in other female burials in this period, but nothing like this, which is backed with wood,” Lyn Blackmore, a specialist at the Museum of London Archaeology (MOLA), the organization that made the discovery, told Artnet News about the artifact’s significance.

Only fragments of tooth enamel remain of the woman herself, but she is now the subject of eager speculation. “She was extremely devout, but was she a princess? Was she a nun? Was she more than a nun—an abbess? We don’t know,” said Blackmore.

The seventh century C.E. was a time of huge cultural transition as many areas in the U.K. were converting to Christianity. Previously, only men had been given such magnificent burials, suggesting that by around this time women were gaining some status within the new Christian faith. With its pagan roots, the practice of burying people with treasures and goods would die out within just a few decades.

“The scale of the wealth is going to change our view of the early medieval period in that area,” said Simon Mortimer, of Archaeological Consultants, RPS, which supported the excavations. “The course of history has been nudged, ever so slightly, by this find.” 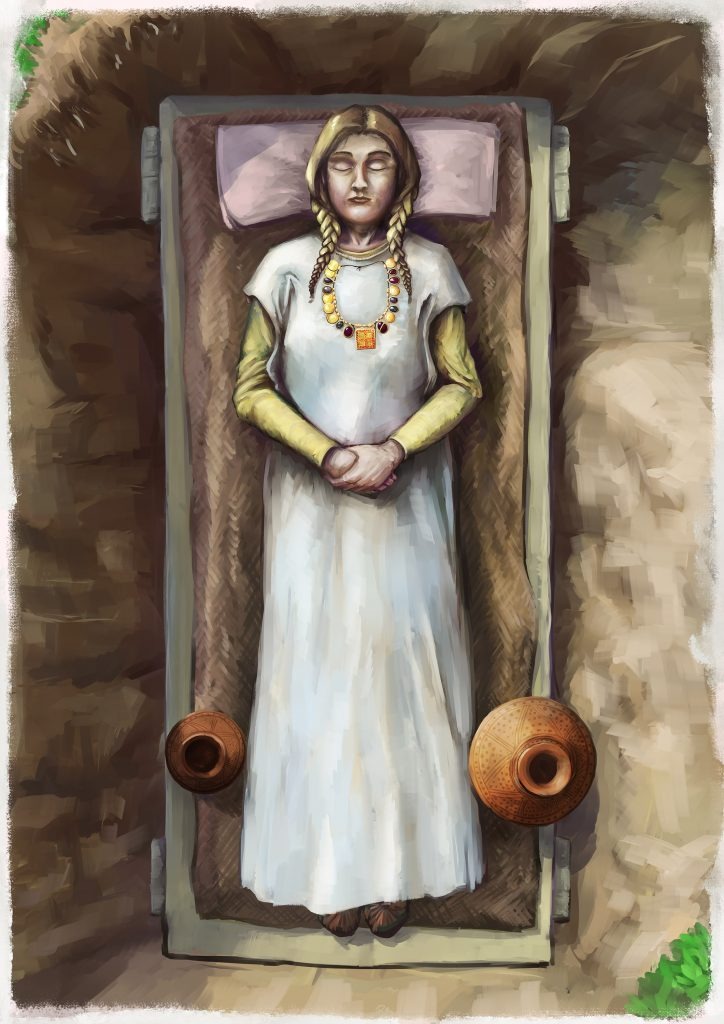 The unearthed items are now being scientifically analyzed by MOLA conservators, who are looking for evidence of how the objects were used in life or during burial rites.

“This find is truly a once-in-a-lifetime discovery—the sort of thing you read about in textbooks and not something you expect to see coming out of the ground in front of you,” Mortimer concluded.

There was nothing remarkable about the surrounding land that would have made it stand out to archaeologists but the dig was organized as part of the routine planning process required by property developers in the U.K. In this case, Vistry Group is planning to use the area to build homes.

A spokesperson for Vistry confirmed that it waives any right to the Harpole Treasure, which will be gifted to the nation and put on display in a local museum. First, it will be featured on the new series of BBC Two’s “Digging for Britain,” which airs in early January 2023.