In 1959, a human skull, that has been dated back 700,000 years and is now known as the “Petralona man” or the “Archanthropus of Petralona,” was unearthed. Since that time, researchers have been pondering the question of where exactly this skull came from, which has sparked a significant amount of discussion.

The skull, which was found lodged in the wall of a cave in Petralona, located close to Chalkidiki in Northern Greece, is considered to be the oldest human “Europeoid” (showing European traits). A shepherd accidentally discovered the cave, which was filled with stalactites and stalagmites. In the following years, researchers also unearthed a vast quantity of fossils, which included pre-human species, animal hair, petrified wood, stone and bone tools, and other artifacts. (Source)

The President of the Petralona Community gave the skull to the University of Thessaloniki in Greece. The agreement stated that once the investigation was completed, a museum displaying the findings from the Petralona cave would be opened, and the skull would be returned to be displayed in the museum. However, this promise was never fulfilled.

Dr. Aris Poulianos, an expert anthropologist who was working at the University of Moscow during that time, was tasked with conducting research on the skull and cave. He was a member of UNESCO’s IUAES, which stands for the International Union of Anthropological and Ethnological Sciences. Later, he founded the Anthropological Association of Greece. 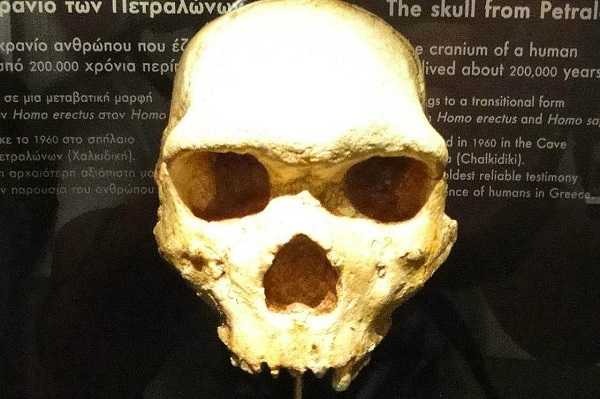 The Petralona skull on display at the Archaeological Museum of Thessaloniki. Image credit: Wikimedia Commons
Dr. Poulianos’s prior work, titled “The Origin of the Greeks,” had already gained him notoriety. His research into the cranial and anthropometric characteristics of contemporary Greeks provided the foundation for his thesis, which demonstrated that present Greeks are descendants of ancient Greeks and not Slavic nations.

Dr. Poulianos has studied early hominid remains discovered in a cave in Petralona, Greece, since the 1970s and is well known for his contentious age estimates. The Petralona Cave, according to Dr. Poulianos, was unintentionally found in 1959 by local villagers who were looking for a spring in a mountainside.

The presence of a plethora of caverns in a country where limestone makes up 65% of the ground is entirely natural. Furthermore, Greece is the world’s second most cave-rich country, trailing only China. Thousands of these formations have been investigated, mapped, and studied, and over 100 have been recognized as being of exceptional interest to visitors.

The “Petralona man,” also known as Archanthropus of Petralona, was revealed to be 700,000 years old, making it the oldest human Europeoid of that age ever unearthed in Europe. It has been established through Dr. Poulianos’s research that the Petralona man did not originate in Africa but rather evolved independently in Europe.

The “Out of Africa” theory proposes that “anatomically modern humans” known as “Homo sapiens” originated in Africa between 200,000 and 100,000 years ago before spreading to the rest of the world. This notion was based on the fact that the majority of prehistoric fossils were discovered in Africa.

In 1964, two German researchers, Breitinger and Sickenberg, tried to disprove Dr. Poulianos’s findings by saying that the skull was only 50,000 years old and that it was from an ancestor who came from Africa. But research that was published in the US in 1971 in the respected Archaeology magazine confirmed that the skull was, in fact, 700,000 years old. This was determined by looking at the layers of the cave and the sediment where the skull was found. (Source)

Further research in the cave led to the discovery of fossils from many different species, isolated teeth as well as two pre-human skeletons, that were 800,000 years old. In September 1995, Dr. Poulianos presented a calcified tibia found in Triglia, Chalkidiki, which he claimed belonged to a Homo erectus form he termed Homo erectus trilliensis, spreading all over the world from this region of the Aegean, of the SE of Europe 13 million years ago, and which he dated to 11 million years before the present. Poulianos believes that his discovery may challenge the Out of Africa theory regarding human evolution. 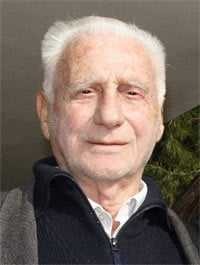 Most scientists, who have looked at the Petralona remains, say that the cranium of the Archanthropus of Petralona is from a different kind of ancient human than Homo erectus. And from both traditional Neanderthals and modern humans in terms of anatomy, but with traits of all three species and strong European traits. A skull from 700,000 years ago that is either all or part Homo sapiens goes against the Out of Africa theory of how people evolved.

International researchers (46 specialists from 12 countries) continued excavations in the cave of Petralona, which provided additional evidence for Dr. Poulianos’ claims. It includes fossilized wood, an oak leaf, animal hair, and coprolites, which enabled accurate dating, as well as the almost continuous presence of stone and bone tools of the Archanthropus evolutionary stage, from the lower (750,000 years) to the upper (550,000 years) layers of sediment within the cave.

The research was conducted up until 1983, with an interruption caused by the dictatorship in Greece. The government then forbade any further excavations at the site, including by the original archaeological team for the next 15 years. No one had access to the site or the discoveries, and no explanation was given.

However, Dr. Poulianos’ research was buried because it ran counter to the prevailing theory of human evolution at the time. In 2012, Dr. Poulianos and his wife were attacked and injured, but the people responsible for it were found. He and his team have not been able to go back to the cave to finish their research, and the whereabouts of the skull is now unknown.