Two rare 3,000-year-old models of ancient shrines were among artifacts presented by an Israeli archaeologist on Tuesday as finds he said offered new support for the historical veracity of the Bible. 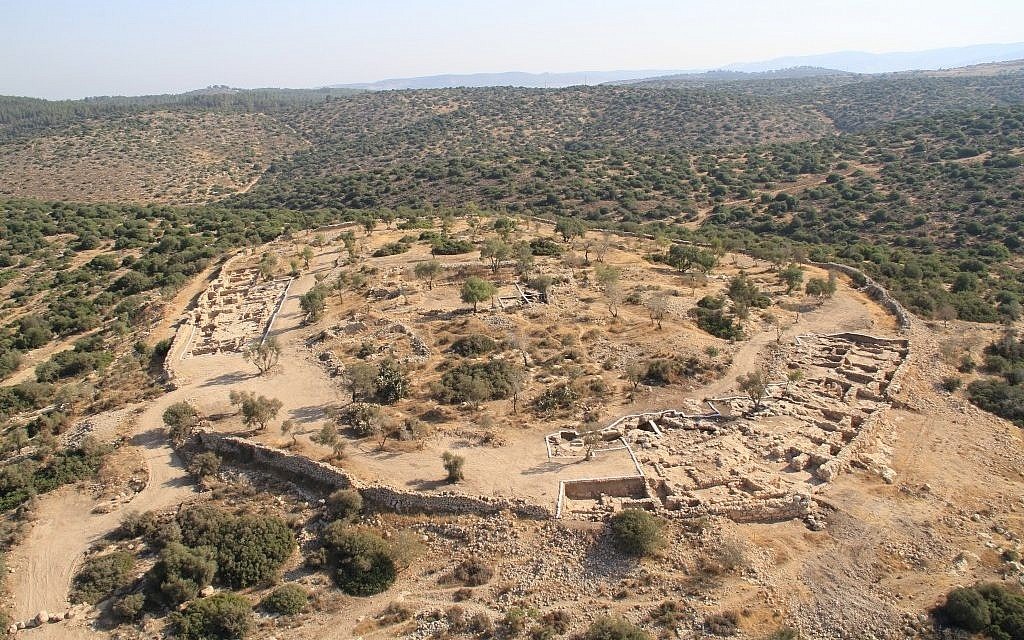 The archaeologist, Yosef Garfinkel of Hebrew University, is excavating a site known as Hirbet Qeiyafa, located in the Judean hills not far from the modern-day city of Beit Shemesh.

Garfinkel says the central finds presented Tuesday at a Jerusalem press conference — two model shrines, one of clay and one of stone — echo elements of Temple architecture as described in the Bible and strengthen his claim that the city that stood at the site 3,000 years ago was inhabited by Israelites and was part of the kingdom ruled from Jerusalem by the biblical King David.

Since Qeiyafa was first unveiled in 2008, it has become considered one of the most important ongoing excavations in the world of biblical archaeology. Garfinkel says the existence of a fortified city at the site around 1,000 BCE supports the idea that a centralized kingdom existed around that time, as described in the Bible.

Archaeologists are split over whether King David was a historical figure, a point of dispute that reflects a broader debate over whether the Bible is an accurate record of events. Some scholars believe the text is just that, while others believe it is largely mythical, based perhaps on fragments of fact.

Garfinkel is firmly in the former camp, and sees his finds at the site as supporting the idea that the Bible’s account is factually based.

“There is an argument here that is bigger than the dating of any one site,” Garfinkel said at the press conference. “In essence, the whole Bible is being judged.” 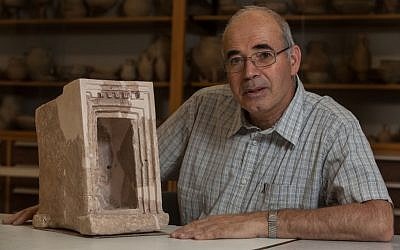 Yosef Garfinkel with a shrine model made of stone, found at Hirbet Qeiyafa (Courtesy Hebrew University of Jerusalem)
Model shrines of the type found at the site would have been used in ritual practice. One of the models, 8 inches high, is made of clay, and includes a main door and two pillars as well as decorative elements like two lions on the doorstep and three birds perched on the roof. Garfinkel suggested the pillars were suggestive of the ones known as Boaz and Yachin, which the Bible says existed in Solomon’s Temple.

The other shrine, made of limestone and standing 14 inches high, includes stylized roof beams and a recessed doorway, which Garfinkel said could help settle disputes about how best to translate some of the Hebrew words used in the Bible to describe architectural elements of the Temple.

Perhaps the most notable aspect of the Qeiyafa finds, he said, is not what has been found but what has not: The diggers have found none of the cultic figurines of animals or people common at other sites, he said, suggesting residents followed a prohibition against idol worship. And the archaeologists at the site have found thousands of bones of sheep, goats and cattle, but none of pigs, suggesting they followed a dietary prohibition on swine.

“The people at the site obeyed two biblical commandments — they didn’t eat pig, and they didn’t make graven images,” he said. This, he said, supported his view that the site was a fortified Israelite city.

The fortified nature of the settlement at Qeiyafa is important because members of the “minimalist” school in biblical archaeology, who claim there was no organized kingdom in Judea at the time David was supposed to have existed, have based that conclusion in part on an absence of fortified cities at the time. Building such cities requires centralized administration.

Qeiyafa would seem to show that such cities in fact existed, meaning that there could well have been a centralized kingdom like the one described in the Bible.

Other scholars have urged caution in reaching conclusions based on the findings from Qeiyafa.

Model shrines of the type presented Tuesday have been found at many other sites belonging to other local cultures, and their similarity to Temple architecture as described in the Bible has already been noted, said Aren Maeir of Bar-Ilan University, who leads a dig at the ruins of the nearby Philistine city of Gath. And the existence of lions and birds on the clay model undermine the claim that no figures of people or animals have been found at Qeiyafa, he said.

Qeiyafa indeed appears to have been inhabited by Israelites, Maeir said, but the cultural lines among the various peoples of the Land of Israel at that time, he said, were “fuzzier than the way they are often described.”

The new finds do not prove conclusively who residents were or provide dramatic new evidence for any side in the ongoing dispute among biblical archaeologists, he said.

“There’s no question that this is a very important site, but what exactly it was — there is still disagreement about that,” Maeir said.

The ruins at Hirbet Qeiyafa were first noticed in 2003 by Saar Ganor, a ranger with the Israeli Antiquities Authority. He contacted Garfinkel, and digging began in 2007.

The next year, Garfinkel unveiled the first dramatic find from the site – a ceramic shard that some scholars believe contains the oldest example of Hebrew ever found. He suggested the writing supported the case for the Bible’s accuracy, because it meant that 3,000 years ago the Israelites could record events and transmit the history that was compiled as the Bible several hundred years later.

The excavation has uncovered a city eight acres in area with two monumental gates and a wall running 770 yards in circumference.

Carbon dating of olive pits found at the site show it was active between 1020 and 980 BCE, according to the archaeologists.